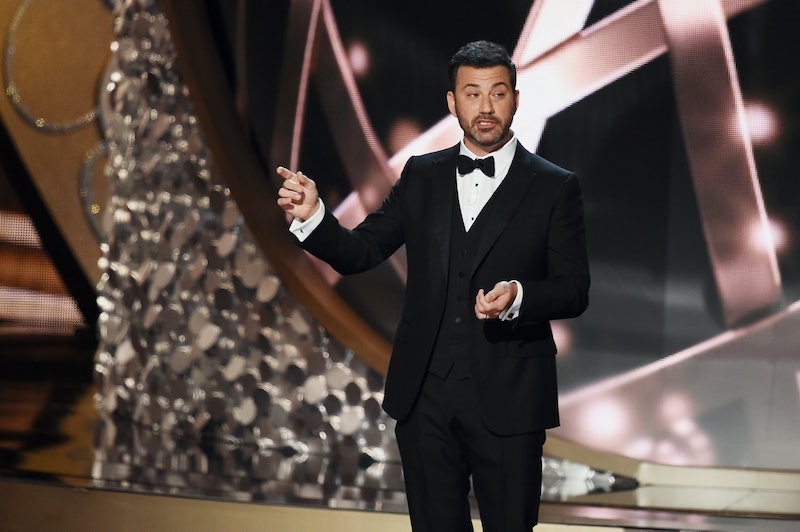 Charles Dickens had no clue that his legendary line from Tale of Two Cities, "it was the best of times, it was the worst of times," would one day come to perfectly describe major awards shows. Yet, when Jimmy Kimmel hosted the 2016 Emmys, he proved that you can make an awards show good and exclude most of the cringe-worthy moments that viewers have come to expect from live TV. With a mix of hilarious jokes about the television industry, politics, and pop culture, he has been nailing the ceremony. Whether you were watching the Emmys from inside the Microsoft Theater or from the comfort of your couch, I'm sure Kimmel's jokes at the 2016 Emmys had you laughing.

I've always been a fan of Kimmel's humor, and now even more so after seeing how he teased the celebrities in attendance just the right amount. Plus, they can't be too offended since everyone from Julia Louis-Dreyfus and Jeb Bush joined Kimmel in poking fun at themselves during his amazing opening. And no, Kimmel wasn't as wacky as Andy Samberg was in 2015, but that's not Kimmel's style. Even if a few of of his jokes were less memorable than some, he still got some excellent zingers in there — so here are the best and worst jokes from Kimmel during the 2016 Emmys.

"The Rest Of You, If Your Show Doesn't Have A Dragon Or A White Bronco In It, Go Home Now."

Kimmel just got real with all of the nominees to set their expectations.

"Because Everyone In LA Knows, If You Want To Win, Sit Next To Marcia Clark."

Sarah Paulson brought head O.J. Simpson case prosecutor Marcia Clark as her date and was dead wrong when it came to this joke since Paulson did win for her portrayal of Clark.

"It's Very Hard To Find An Actress Over 50 Who Needs A Part."

Kimmel acknowledged that maybe Louie Anderson's Emmy-winning part on Baskets could have gone to a woman.

"Thank You For Coming All The Way From England To Tear Us All Apart With Your Intricate Plot — It Worked."

The world finally knows who to blame for Donald Trump running for president — The Apprentice and Celebrity Apprentice producer Mark Burnett.

"When Maggie Smith Hears She's Nominated For An Emmy She Has The Same Reaction The Rest Of Us Have When We Get Those 20 Percent Off Bed, Bath & Beyond Coupons. Right In The Garbage."

Personally, I save those coupons forever, but I get you, Kimmel.

"We Could Only Afford One EpiPen."

The peanut butter and jelly sandwiches joke was played (see below), but the EpiPen joke at least took a stab (yup, that was intentional) at pharmaceutical companies.

"I'm Trying To Figure Out If 'Topple The Patriarchy' Is A Good Thing For Me Or Not."

Jill Soloway's rallying cry might not be good for Kimmel, but it's good for a lot of other people.

"He's Not Really Here, I Just Wanted To See What You Guys Would Do."

It's debatable whether this was a "good" or "bad" joke, but while the audience in the Microsoft Theater was uncomfortable, I found the panic at the mention of Bill Cosby pretty amusing.

"She's Downton Absent Is What She Is."

This one was in response to Maggie Smith never showing up to awards shows where she wins. Not offensive, just a little too close to dad joke territory.

While I can't complain about the appearance of the Stranger Things kids, did we really need another joke about feeding people at awards ceremonies? This one is played, Kimmel.

"That In Memoriam Montage Kicked Ass, It's Gonna Be Tough To Beat Next Year, It Really Is."

Too damn soon, Kimmel — even the audience gave an audible groan.

Yes, yes Allison Janney is the mom on Mom, so the dad jokes are officially back, Emmy watchers!

While Kimmel started out strong with his flawless opening segment, he lost steam toward the end of the night. But as far as awards shows go, Kimmel at the 2016 Emmys did a pretty good job and in his own, uncomfortable words, it's gonna be tough to beat next year.