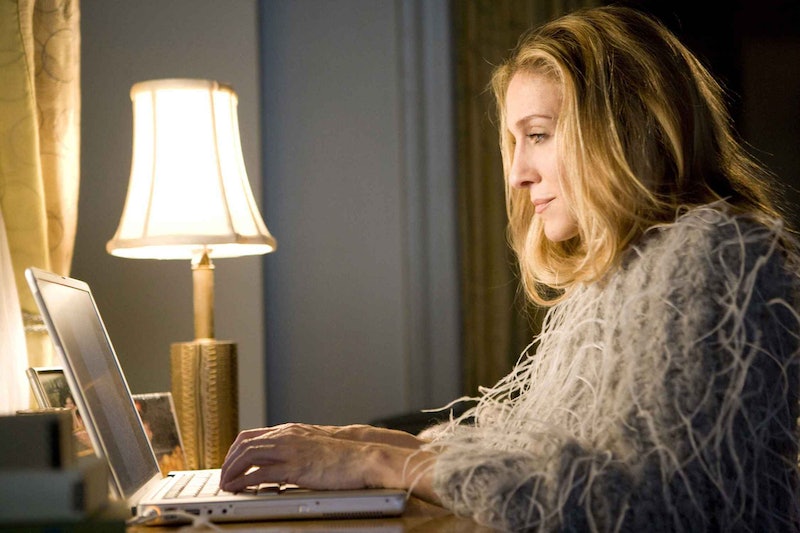 ICYMI, the '00s were a trendy time to be young and impressionable — as in, there were a lot of trends flying around, and we were all too eager to grab on as they whizzed by and hold on come hell or high water. Our careers were no exception to the rule. There were certain jobs you desperately wanted to have in the '00s, largely spun from our favorite films and TV shows of the time. It was just the natural order in the first decade of the 2000s that most of us facing future employment were intrinsically drawn to the idea of these very specific jobs that were super cool in the '00s.

Sure, there were slight deviations from time to time. I, for example, spent a solid chunk of my formative years dreaming of becoming an aviator in the vein of Amelia Earheart. Still, most of us cycled through the jobs on this list several times during adolescence and beyond because, well, they were what we were accustomed to seeing onscreen. And, really, that hasn't changed much since the advent of TV and film, right? If I asked my 5-year-old daughter today what she wanted to be, she would probably say a Disney Princess or an explorer like Dora. The major players have changed, but the idea remains the same — girls often grow up wanting to emulate the female characters we see onscreen. Ya hear, Hollywood? Sounds like a pretty compelling reason to bring more female voices to the table and get more strong, empowered, complex female characters in TV and film.

Having said all of that, there's nothing wrong with these careers we so fervently dreamed of in the '00s. The important thing is we had aspirations and were actively dreaming of achieving something for ourselves. Hear, hear, us of the early '00s! In that spirit, let's take a look at the things we dreamed of doing when we "grew up."

No matter how small or dorky or awkward you felt in high school, watching Almost Famous convinced you that becoming a music writer would make you a golden god. Touring with a band who had Billy Crudup for a lead singer, hanging out with a "Band-Aid" as badass as Kate Hudson's Penny Lane, and getting to write for a major music magazine? Um, yes please!

Your life's dream was officially to steal Ashton Kutcher's hosting gig on Punk'd so you could play horrible, awful, no-good pranks that were also hilarious on celebrities like Justin Timberlake and Zach Braff. That's a noble goal, right?

While my idea of a left hook is something you might find in a tacklebox, I had myself convinced for a hot minute that I could be a fierce AF female boxer racking up belts with my killer KO's. I never came close to a ring which, to be honest, was a good thing in my case. But kudos to movies like Girlfight and Million Dollar Baby for reminding young girls we could be contenders.

In the post-Carson Daly era of TRL , it didn't seem too far-fetched to believe one might actually be able to lang a gig on the show — there was a revolving door of VJs following his exit. Whose to say you or I couldn't have been the next Hilarie Burton or Vanessa Minnillo? And besides, the Wanna Be A VJ contest had first planted the idea in our heads several years prior — who could forget the winner of the first edition of it in 1998, Jesse Camp?

Real talk: You didn't just want to own a charming little bed and breakfast like Gilmore Girls' Lorelai Gilmore; you wanted to be Lorelai Gilmore. Come to think of it, some things never change.

In the early '00s, Kate Bosworth's character in Blue Crush was the epitome of cool. The "kind of girl who doesn't ask a guy what to do," Ann Marie gave every '00s girl a serious case of surf stoke. 'Cause, honestly, who among us back then didn't dream of spending every day at the beach and being clothed by Billabong for life?

What, like this wasn't an option? Technically there were four members at various points in the super-group's history, so it wasn't crazy to think you could have filled that niche. After all, you did know every single word — and the accompanying choreography — to "Survivor" and "Bootylicious."

Unemployed. Broke. Liked to wear shirts that showed her bra straps. Erin Brockovich was all of us in the '00s, which led us to believe we were just a hop, skip, and a jump from righting the injustices of the world with a take-no-prisoners mentality and some colorful language.

9. Any Employee of Sacred Heart Hospital

From Carla the nurse to J.D. the doctor to Turk the surgeon to "The Janitor," there wasn't anyone at Scrubs ' fictional Sacred Heart hospital you didn't envy at some point during the show's nine-season run. Brb, still imagining what life would have been like sipping appletinis at the local watering hole with Elliot and having Dr. Cox as a tormentor. Er... mentor.

10. Buyer for a Fashion House

Thanks, Rach! In addition to your haircut that we just had to have, your Friends' career as a buyer for Ralph Lauren launched a million '00s girls' dreams of spending our nine-to-five buying chic ensembles for fashion houses.

HGTV may have launched in the mid-'90s, but I feel like it really hit its stride in the '00s. Thanks to interior designers like Divine Design's Candice Olsen, we all started karate chopping our throw pillows and envisioning an office filled with fabric swatches, paint color decks, and luxe Flokati rugs. Bonus points if you got Karen for a co-worker, like Will & Grace's leading lady had.

Oh, who am I kidding? I still want to be like Carrie Bradshaw and over-share all of the details of my sex life ... and the sex lives of everyone I know. Sharing is caring, people! See also: so many Manolos.