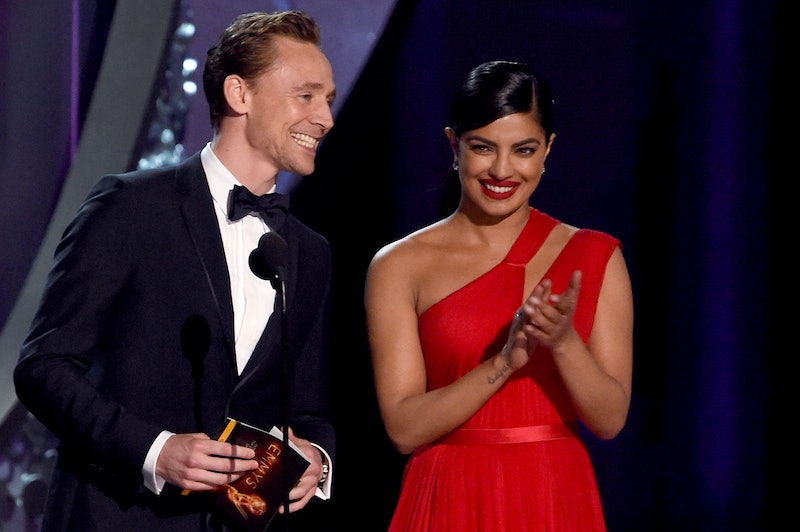 Hiddleswift is the sensation that captivated a nation. Sometimes in the good way, sometimes in the bad way, but definitely in the interesting way that inspired a lot of thinkpieces. Honestly, I'm surprised that the 2016 Emmys went as long as they did without making some sort of Taylor Swift reference considering Tom Hiddleston was in attendance. And, OK, they didn't make a reference per say . But, during the Emmys, the camera cut from John Mayer to Tom Hiddleston in what seemed like a perfect moment, especially if you've been a Swift fan for as long as I've been a Swift fan. Hiddleston and Mayer, for those who don't know, are both exes of the pop star's. One even has a song written about him.

"Dear John," which appeared on Swift's 2010 album Speak Now, was about as transparently about Mayer as it was possible for a song to be, with Mayer even saying in a 2012 interview with Rolling Stone that the song "made [him] feel terrible." He then went on to say, "Because I didn't deserve it. I'm pretty good at taking accountability now, and I never did anything to deserve that. It was a really lousy thing for her to do."

Now, when Hiddleston and Swift broke up, people were quick to make jokes — and genuinely speculate — as to what kind of song the pop star would write about him. It's not an uncommon thing for the singer to have to deal with since, despite the fact that most if not all musicians have written at least one song about an ex, she is the one who is often cited as doing it the most. Thus, the fact that the Emmys chose to pan from Hiddleston hugging director and now Emmy winner Susanne Bier to John Mayer casually plucking strings as he played the guitar as a member of the Emmys band seemed kind of on the nose.

Personally, I'm still harboring a lot of hurt over the demise of Hiddleswift, who were my favorite new couple to come out of this year. And, of course, I'm not saying that the Emmys really went out of their way to make this scene happen just to make me happy or reference Swift. But it was just too perfect a moment to let go without commenting on it. In fact, I think Vanessa Golembewski said it best.