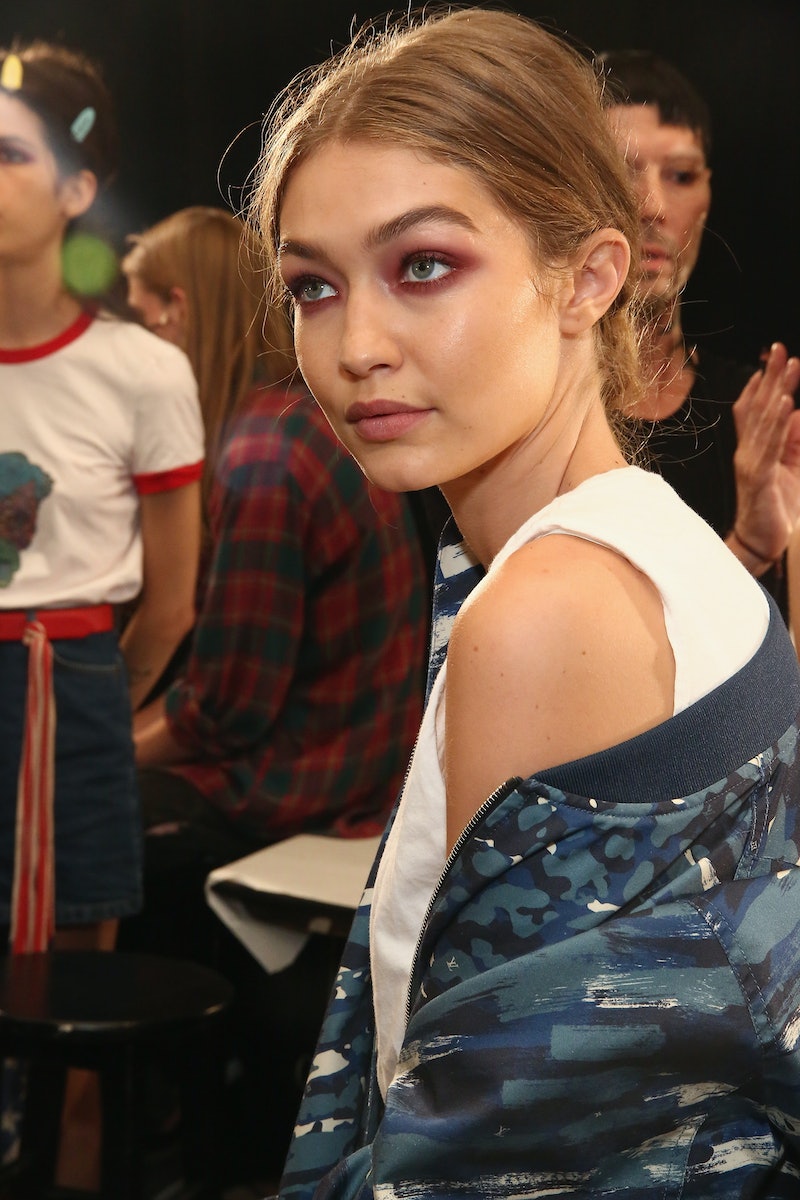 Too often in the past few months, I have had a recurring thought pop into my head: Where in the world is Harry Styles? I know that he's been busy filming his first acting role for Dunkirk, but on Monday, Sept. 26 Styles returned. The Internet went into a tizzy when Styles posted three magazine covers for AnOther Man on his Instagram with no warning whatsoever. Styles' solo era is rising, y'all! While many 1D fans were super excited about him resurfacing, a certain girlfriend of an ex-bandmate might not be such a fan. Gigi Hadid seemingly threw shade at Styles' cover by Snapchatting a pic of Zayn Malik's September 2016 Elle UK cover with the caption "A COVER."

I want to think there is no drama over in young Hollywood world, but the fact is that Hadid posted her snap about 30 minutes after Styles posted his. And, well, her caption totally reads as, "Yeah, those covers are alright, but my boyfriend's cover is a REAL COVER." Yeah, it seems like shade to me. (Bustle has reached out to Hadid's rep for comment, but has not yet received a response.)

Now, did Hadid intentionally shade Styles? I personally believe she has strong reasons to not be his biggest fan.

If anyone is not familiar with the tight-knit circle these two run in, Hadid is dating Styles' ex-bandmate and he has dated (or at least yacht canoodled with) two of her best friends, Taylor Swift and Kendall Jenner. As for Malik and Styles, they haven't publicly shown that they're frenemies, but it's safe to say that they're not friends as they once were when they were in the same band together.

And Hadid and Styles have had a seemingly awkward moment in the past. Back at the American Music Awards in November 2015, Hadid and Styles had an odd exchange on the red carpet when she bumped into One Direction. Fans noticed that Hadid hugged every other 1D member except Styles, with some claiming that he rolled his eyes at her. It's unclear what was going on, but there did seem to be some sort of tension between them.

It would be a big coincidence for Hadid to post her snap right after Styles released his covers, so I think think that Hadid was probably showing her allegiance to Malik and her squad friends and being a little bit cheeky. It would only make sense that Hadid would think Malik's cover is superior. I mean, she's proud and in love with her man, so wouldn't anyone think the same?