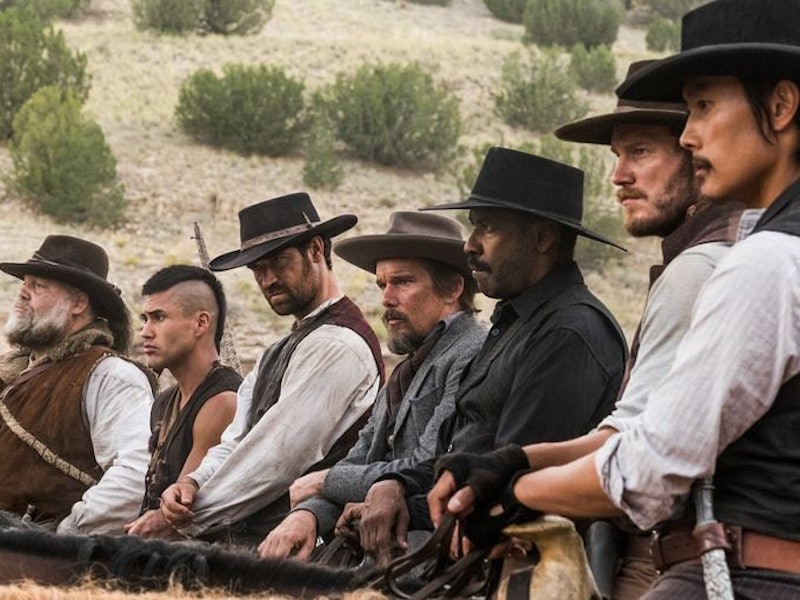 With issues like #OscarsSoWhite and the general lack of on-screen representation for people of color spreading throughout Hollywood, many filmmakers doing remakes of older films are choosing to add diversity to their casts, choosing actors of various races and ethnicities to play parts originally portrayed solely by white people. In the case of The Magnificent Seven , a remake of the 1960 Western classic, director Antoine Fuqua did just that, casting several non-white actors rather than follow the example of the original film, which featured mostly white performers. Yet while that's certainly commendable, Fuqua missed another opportunity when it came to ensuring diversity in his film: adding women to the cast. The Magnificent Seven cast is predominantly male, with the main band of seven to which to title refers all being men. Considering that Fuqua and the film clearly made a valiant attempt at equality, it's disappointing to see that despite all the film's strides for diversity, women are still left out of the picture.

The 2016 version of The Magnificent Seven is a remake of John Sturges 1960 film of the same name, which, in turn, is an American Western remake of Akira Kurosawa's 1954 Japanese film Seven Samurai. The 1960 film wasn't completely made up of white characters, though its representation of those who weren't came with a few problems. Russian-born Yul Brynner, who claimed Mongolian ancestry, played the ringleader of the Seven, who is said to be Cajun, while Eli Wallach and Horst Buchholz, both white men, portrayed Mexican characters in the film. The Old West was, overall, more ethnically diverse than many realize. but regardless, the movie's mostly white cast and problematic elements aren't exactly good examples for a remake to follow.

So, understandably, Fuqua chose to feature an inclusive cast with his remake. The new film has Denzel Washington in the lead role, with Native American actor Martin Sensmeier as a warrior named Red Harvest, Mexican actor Manuel Garcia-Rulfo as the outlaw Vasquez, and South Korean star Byung-hun Lee as a character named Billy Rocks. The inclusion of these actors and characters should definitely be celebrated. The problem is, however, that Fuqua's goal of inclusivity forgot one major group: women. The director recently told Buzzfeed that the movie's "really important to me because it’s diverse... You miss out on that talent, you miss out on what they bring to the screen if you just thought that old-school way. They all bring something different. If everyone’s the same, what’s the point of that?" Indeed, what is the point of that? Having everyone be the same would be missing out, as he says, and yet I look at the cast of seven magnificent people and see not one magnificent woman.

Sure, the cast of The Magnificent Seven includes Haley Bennett as the brave Emma Cullen, who hires Washington's Chisolm to avenge the murder of her husband. But while the character successfully straddles "delicacy" and "toughness," she isn't technically a part of the "magnificent seven," nor does this her inclusion act as sufficient representation of women in a cast of eight other men.

Why couldn't there've been a second or even (gasp!) a third female character in this film? Sure, some people might argue: "It's a band of outlaws and bounty hunters. It wouldn't be realistic to include a woman." But examine history a bit closer and you'll find that that's not true at all. As historian Virginia Scharff writes in the Journal of the Gilder Lehrman Institute of American History, women weren't just homemakers and child-rearers of the Old West. "Despite the influence of gendered ideas on social life and even federal policy, the West offered women unprecedented opportunities to do what so many men did: to reinvent themselves," Scharff says. Women were teachers, laundresses, and dance hall girls, but they were also ranchers, farmers, and yes, outlaws. Some of the country's first female politicians and legislators resided in the Old West, according to Scharff, and had heavy influence on the suffrage movement leading to the 19th Amendment. So no, it wouldn't have been even remotely off-base for The Magnificent Seven to include more major female characters in the movie, or include them as one, or more, of the titular seven.

It's wonderful that The Magnificent Seven shows such a racially diverse cast, but the lack of women in the film takes away from its overall diversity. Women are already so underrepresented on-screen; according to a study called "It’s a Man’s (Celluloid) World: Portrayals of Female Characters in the Top 100 Films of 2015" by the Center for the Study of Women in Television and Film, "females accounted for 34% of major characters" in the top 100 movies last year, and only 22% of protagonists. The Magnificent Seven doesn't even reach that percentage, as Emma Cullen's inclusion means a mere 11% of the main cast of the movie is female.

So while I applaud Fuqua's attempt at including actors of multiple races in this remake, it's bothersome that the film was neglectful of going 100% with the effort by including more women. The Magnificent Seven has achieved something impressive when it comes to racial diversity on screen; it's a major shame that, once again, women were shut out of the picture.