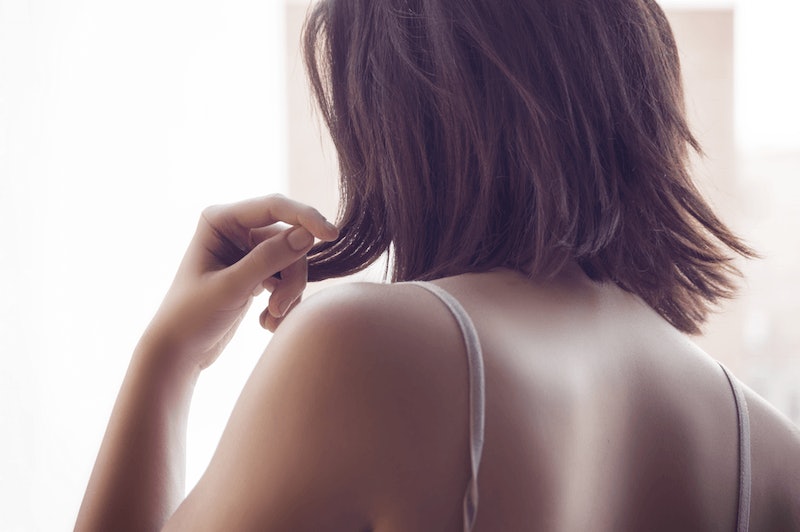 Some people who are on the autism spectrum go through life without anyone noticing. They may seem a bit "strange," or have some odd interests. For the most part, however, they blend right on in with the rest of the society. But there are also the people who display more traits of Asperger Syndrome, and these people — your friend, your coworker, your SO, your neighbor — tend to stand out a bit more.

"Typically, the defining factor in someone who has Asperger's ... is a lack of social skills," says Nicole Martinez, Psy.D., LCPC, in an email to Bustle. "They...are brilliant, but just 'aren't people persons.'" To everyone else, this might look like they have a case of the awkwards, or a total lack of desire (or inability) to make eye contact.

And this is where Asperger's often gets confused with autism. "Autism is a more debilitating disorder, with a far worse prognosis depending on severity of symptoms and intervention timing," Dr. Michele Barton tells me via email. "Asperger's is far less severe and has a much better prognosis. Individuals often go on to live acceptable mainstream lifestyles."

Due to these differences, the terminology has recently changed. "Asperger's is now grouped among other syndromes that fall on the same continuum termed Autism Spectrum Disorders (ASD)," Barton explains. "Individuals formerly diagnosed with Asperger's are now diagnosed as High Functioning ASD." Read on to learn more about these ASD traits, so you can better understand what it looks like.

1. They'll May Have Difficulty Reading Other People's Emotions

If someone is on the autism spectrum, one of their defining characteristics will be a decided lack of social skills. "They struggle in this area," Martinez says. "They have difficulty reading other people's emotions, facial expressions, and how they should respond in emotional situations." It can make social gatherings, or even the simplest of convos, feel kinda awkward.

2. Articulate People Are Often Their BFFs

Since reading emotions is sort of a no-go, younger people with ASD will often turn to people they can relate to verbally. As Barton says, "Social situations are hard to navigate as they are not very receptive to expressive and emotional cues. So, from a young age they enjoy the company of more verbally articulate adults or older children."

3. They May Have A Narrow Range Of Interests

People with ASD tend to get hyper-focused on one (often very specific) hobby. "For example, I had an adult who was very into bugs," Martinez says. And I used to babysit a little boy with ASD who was super into trains. This intense love for one area or interest can be a dead giveaway that a person is on the spectrum.

4. They Probably Don't Have Much Tolerance For Flexibility

Nobody likes it when their plans go awry, but people with ASD will be very bothered by it. This is mostly due to their strict, inflexible, and repetitive way of doing things, according to autism expert Lisa Jo Rudy on VeryWell.com. Having to do a work project in an unexpected way, for instance, will leave them feeling overwhelmed and upset.

Elevator rides with strangers, one-on-ones at parties, first dates — these are situations that people with ASD dread. That's mostly because these situations involve small talk, which, according to Rudy, can be a tricky thing for those on the spectrum.

In the same way people with ASD don't like their plans messed with, they also don't respond well to other forms of change. "They are often rigid and respond poorly to change in routine or attempts to interfere with their objects of interest," Barton said.

7. Making Friends Is Often Not Easy

It's not impossible for people with AS to make friends. In fact, one of my besties has ASD and they are as nice and supportive (if not more) as my other friends. But, according to Rudy, making friends is a problem that exists for many people on the spectrum.

"Getting a romantic partner who has that same interest, and is willing to focus on [a narrow] subject ... can be difficult, "Martinez says. As is finding someone who fully understands what this whole "autism" thing is all about. As with friendships, it's not impossible for people with ASD to snag a partner. But it can be more difficult for them.

9. Focusing Is Rarely A Problem

Those who are on the spectrum will have an impressive ability to focus on a task — sometimes for very long periods of time, according to Rudy. I've seen this in my friend who can play a game or listen to music for way longer than anyone else I know.

10. Conversations Can Be A Bit One-Sided

Because recognizing emotions in others is a challenge, people with ASD tend to have one-sided conversations, according to AutismSpeaks.org. It's not that they are being rude. It's just how their brain works.

People with ASD often struggle to make eye contact, so you might notice your friend or coworker averting his or her eyes, or looking off into the distance. They might also have some awkward movements or mannerisms, according to AutismSpeaks.org.

So, there you have it — many of the traits of people with Autism Spectrum Disorder. If this lists describes you, then you might be having an eye-opening moment right now. But, at the very least, the list will be super helpful to finally understand and recognize the symptoms in someone else.