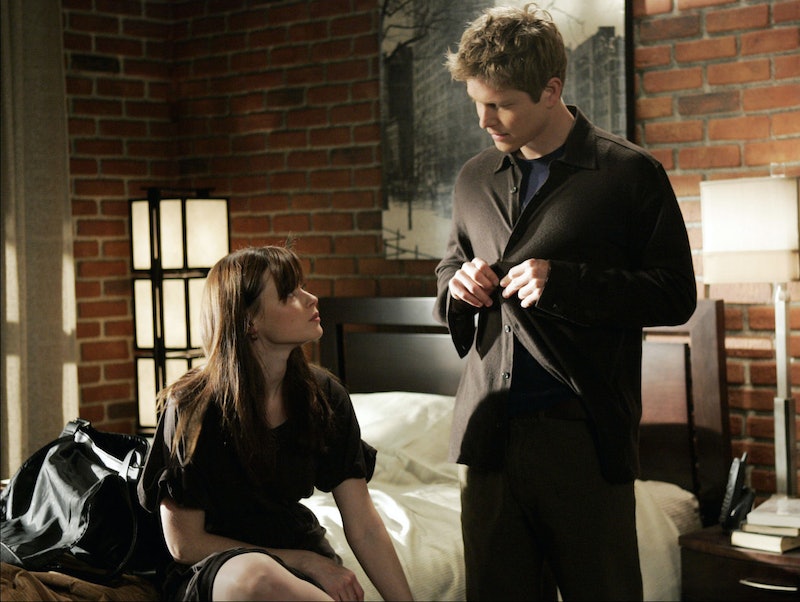 While you'd expect that Rory Gilmore would be onto bigger and better things during the Gilmore Girls revival, it's far more fun for fans if Rory is going to end up with one of her exes in the Netflix series. As a hesitant member of Team Jess, I'm open to the idea of her last boyfriend on the original series — Logan — being Rory's endgame. However, if Logan and Rory end up together, then the Netflix series needs to answer one question for me to be accepting of this relationship: Why did Logan support Rory quitting Yale? Yes, you may have other questions surrounding the intentions of Logan on Gilmore Girls (like, uh, why did he have to propose?), but for me to get behind a Rory-Logan marriage, I need some sort of closure on this Season 6 plot.

A Gilmore girl has gotta do what she has gotta do and perhaps in some ways, every woman has had her equivalent of quitting Yale. But that moment (and by moment, I mean episodes upon episodes) was when I couldn't stand Rory and didn't know if I could ever like her again. Of course, the Gilmore girls have a way of winning you back while simultaneously infuriating you, so I still love Rory, but there was something so upsetting about the fact that the only time she was truly challenged in her academic and professional career, she just flat-out quit. And because this was one of Rory's most questionable moments, it also made it one of Logan's as her Yale-bound support system and boyfriend.

I'm in no way questioning why Logan let Rory quit school or anything since it wasn't his decision to make, but seeing as his own father helped lead to this Rory meltdown, couldn't Logan have offered some encouraging words about why she shouldn't let Mitchum Huntzberger defeat her? To be fair, in the Season 5 finale, he did tell Rory that his father was a bully and in the Season 6 premiere, he told her he expected her to be back at Yale within one month. But when Rory wouldn't listen to her mom, maybe she would have listened to Logan if instead of a drunken comment about how much she loves school, he had told her how ridiculous it was that she quit school.

If I was watching someone I love make a big mistake that would affect his or her future, I would continue to speak up, but instead, Logan fell into playing house in Emily and Richard's pool house with Rory. It's actually pretty bizarre that Logan didn't push Rory to go back to school considering he was the boyfriend who typically challenged Rory the most. Of course, he grew up a lot after this, but even when he was Party Logan, he knew that Rory wasn't making the right decision.

Instead, it took Emily driving her crazy and Jess returning to tell her "This isn't you" to get Rory back on track. And aha! Perhaps this is the reason I am still hung up on this plot — because Jess coming for a single episode inspired her to return to school more than anything her actual boyfriend at the time did. That means if the Gilmore Girls revival wants to convince me why Logan is better for Rory than Jess, I need a decent answer as to why Logan supported this whole dropping out of Yale shenanigans.

While I doubt that Gilmore Girls: A Year in the Life will actually give a good reason as to why Logan didn't gently push Rory — or ask her to jump — into going back to Yale (if the revival even addresses it at all), I'll never forget Rory's dark days and how this Huntzberger should have helped her see the Yale light sooner.