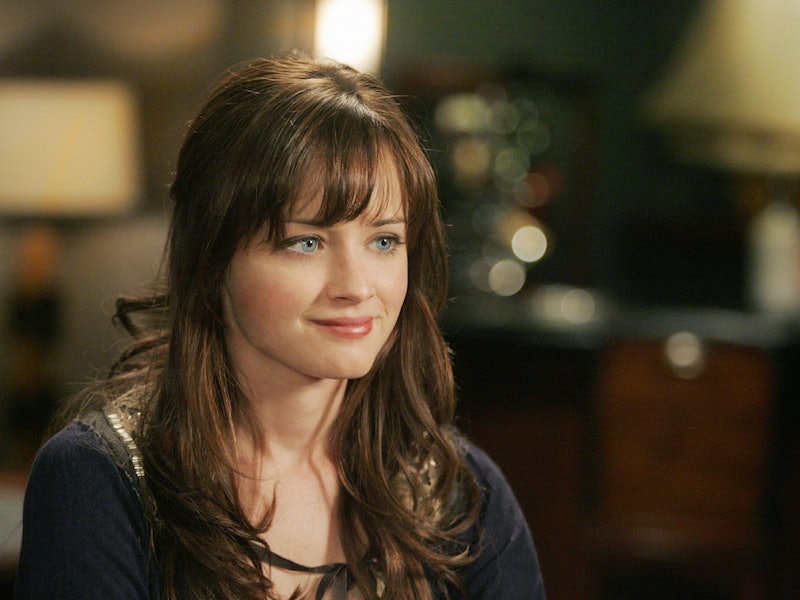 Amy Sherman-Palladino is a clever woman. The creator of Gilmore Girls would often sprinkle hints about future show developments throughout the series for fans to pick up on later on. Whether it was Luke and Lorelai's diner marriage proposal being previewed with Luke's joke proposal in Season 1, to the numerous scenes that pointed to Rory going to Yale instead of Harvard, Sherman-Palladino did it all. I'm not saying Gilmore Girls has Game of Thrones level theories, but Sherman-Palladino always seemed to know where she was taking Lorelai and Rory. Was her plan so intricate that she actually knew who Rory would end up with at the series' start, though? Buckle up, Gilmore Girls fans, because I am taking you all the way back to a Season 1 scene that could contain a major Gilmore Girls revival clue.

By now everyone knows all three of Rory's boyfriends — Dean, Jess, and Logan — are returning for the Gilmore Girls revival, and while Rory will be single when the revival begins, she will be reunited with a past love by the time the final credits role. A lot of speculation has been devoted to which guy will be left standing, and one interesting scene from Season 1's penultimate episode "P.S. I Lo..." could hold the answer.

I know what you are thinking — this sounds completely bonkers — but stay with me. In the episode's cold open, Rory and Lorelai play a game of "one, two, three he's yours." If you need a refresher, the game goes like this: you watch for passing men and you can pass on the first two, but if you do pass, then you have to take the third. When Lorelai plays, she passes on an older gentleman and a much younger guy before Luke approaches the table. That technically made Luke the third person, and the two of them ultimately ended up together several seasons later. Rory stopped playing at number one when Dean walked by. Watch the scene to refresh your memory:

At the time, Rory and Dean were still broken up, and Rory was understandably upset over the situation. That is not what is important here, though. What is important is Rory doesn't finish playing the game. Dean is her first boyfriend, Jess is her second, and Logan? Well, Logan is her third. As Rory herself says, "You can take the first guy who walks by, or if you decide to pass assuming there is somebody better out there, you can take the next guy who walks by, or if you don't take him you are automatically stuck with the third guy."

It is curious that over the course of seven seasons Rory had just three major boyfriends. She and Dean split because Rory clearly had feelings for Jess, and then she and Jess just could not get in sync even though they were well suited for each other. Then Logan came along in college, and things got serious between the two fast.

Sherman-Palladino never got to finish Rory and Logan's story. She and her husband Daniel Palladino left the series at the end of Season 6, and whatever planned ending she had for Lorelai and Rory went with her. Now with the revival coming to Netflix, Sherman-Palladino finally has the chance to end the story the way she wants to, and all of the behind the scenes news points to Logan playing a major role in the series. Not only is he back, but so is his father and his Life and Death Brigade pals. There is clearly more unfinished business with him than there is with any of Rory's other boyfriends, at least from Sherman-Palladino's point of view.

While Logan did propose to Rory in the original series, the proposal occurred in Season 7 after Sherman-Palladino had left. During the six seasons she did write, Sherman-Palladino wrapped up both Rory and Dean, and Rory and Jess' stories. Guy number one and guy number two were officially passed on by Rory, but there was a lingering sense of uncertainty where Logan was concerned.

It's not just that Logan was Rory's third boyfriend. It is that the game correctly predicted Lorelai's love life, as well. Luke was in many ways Lorelai's third serious boyfriend in the series. If you discount Digger, who was more of a placeholder guy in Season 4 while Luke and Lorelai were finally moving toward each other, Lorelai was with Max first, followed by Christopher, and then there was Luke. Three seems to be the magic number when it comes to Lorelai and Rory's love lives.

Of course this could all be the mad ramblings of a Gilmore Girls fan who has had too much coffee and fallen down a conspiracy theory hole, but perhaps Sherman-Palladino always knew boyfriend number three would be the one for Rory — even if Logan Huntzberger did not exist in the Gilmore Girls world in Season 1. Did one, two, three he's yours predict who Rory would end up with? We're all just going to have to wait until the revival premieres on Netflix to see if this theory pans out.