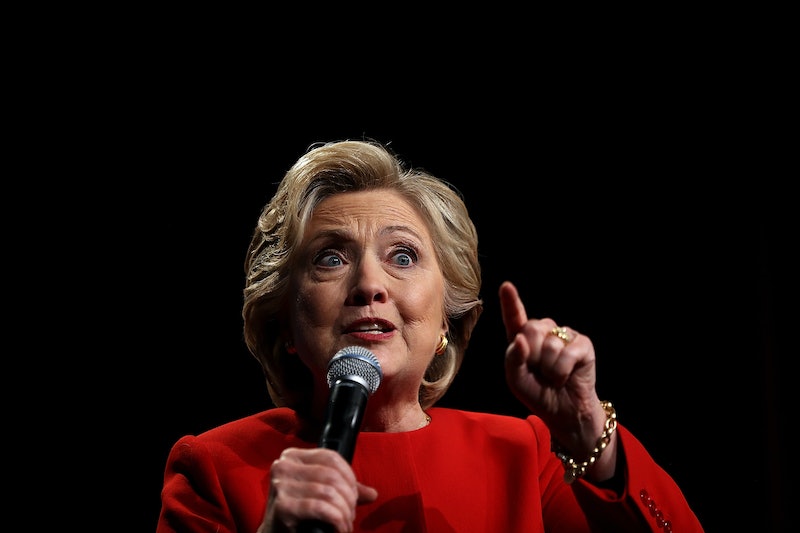 I relate to Hillary Clinton. A lot. If you knew me in person, this might come as a bit of a surprise: unlike the Wellesley valedictorian-turned-high-achieving-lawyer-turned-Secretary-of-State-turned-presidential-candidate, my career mostly revolves around finding new ways to say the word "boner," and, at this moment in time, I own more than one Motley Crue-branded sex toy. But while Clinton and I seem quite different on the surface, we share a few things in common: we believe in many of the same policy initiatives, we both enjoy the music of the Doors, and, most importantly, we've both been marginalized at work just for being women — a fact that Monday night's presidential debate brought into startling relief.

That last point is, of course, something that many, many women have in common with Clinton, regardless of their career paths, education, or personal stances regarding her politics (or their stances on the questionable lyrical prowess of Jim Morrison, for that matter). According to a 2013 survey undertaken by the Center for American Progress and Elle Magazine, 28 percent of American women report experiencing discrimination in the workplace, with two-thirds of women surveyed reporting that "professional women are scrutinized more harshly than men." In my own life, I've often found this to be true: in a previous, pre-blogging life, I held a job at a company where women were often silenced in meetings by male employees who seemed to barely notice they were interrupting them, and frequently written off as "crazy." I personally was sexually harassed by a male boss, told that I'd forget about it soon, and then essentially placed on paid administrative leave while he continued with his career.

It can sometimes feel like you can't do anything right as a woman at work — don't speak and be told that your low pay or lack of advancement are your own fault; speak up and risk being called a bitch — and Clinton's time on the stage at Hofstra was a lesson that those problems can plague women in any line of work, including commander-in-chief of the United States

Clinton's not every woman, of course — she's a wealthy, highly educated white woman who has been the beneficiary of tremendous cultural privileges. And, hopefully, most of us aren't dealing with coworkers or bosses like Donald Trump, a man who would be dismissed as "waaaaaay too heavy-handed" if he was a character in a script you submitted for your freshman screenwriting class. But their first face-to-face interaction this election gave us all a dramatic look at the times when Hillary Clinton's workplace problems looked a lot like some of our own.

When She Was Mansplained To

The number of times Trump spoke down to Clinton could be an article all its own — from his claim that not paying taxes "makes [him] smart," to his assertion that "I don't think Gen. Douglas MacArthur would like [Clinton's website] very much," to the way that he flippantly responded "That's called business, by the way" when Clinton called him out as having rooted for the housing crisis, Trump's repeated assessments that he knew more than Clinton on various subjects (without backing those claims up in any discernible way, of course) feels familiar to many of us who have never run for public office.

Trump's (thankfully failed) debate attempts to mansplain Clinton into silence did more than just annoy us, though — they showed that mansplaining is a very real workplace issue. Mansplaining — a term coined by author Rebecca Solnit, who pegged the phenomenon as men explaining things to women “whether or not they know what they’re talking about" — can keep women from having their ideas heard at work, or taking credit for them.

And it's more than just an irritation — as Lucy Vernasco explained in a 2014 Bitch Magazine piece, studies show that mansplaining is a workplace strategy to show power — a 1998 UC Santa Cruz meta-analysis of 43 studies found that "men were more likely to interrupt women with the intent to assert dominance in the conversation, meaning men were interrupting to take over the conversation floor."

When She Was Interrupted

By now, you've heard a lot about the interruptions at the debate — 26 interruptions in 25 minutes! Trump was responsible for 55 out of 84 interruptions! But those interruptions brought attention to a problem that lots of women have to deal with every day of their lives — at work, at school, and even at home. A 2014 study conducted at the George Washington University found that women are frequently interrupted, by both men and women — when study volunteers were "speaking with a female, participants interrupted more and used more dependent clauses than when speaking with a male." A less formal 2014 study of four weeks of office conversations by a tech startup CEO who also holds a PhD in linguistics found that, according to the New York Times, "men not only interrupted twice as often as women, but were nearly three times as likely to interrupt women as they were to interrupt other men. And women also seemed far more reluctant to interrupt men. Eighty-seven percent of the times women interrupted, they were interrupting another woman."

But these interruptions have a greater impact than they may initially seem to; women who are unable to get a word in edgewise at meetings can be passed over for promotions at work (male workers who speak more often than their peers are usually viewed as more competent), while women who struggle to be heard in academic settings may score poorly when graded on class participation.

When She Was Chastised For Not Being Nice

Clinton's time in the public eye has been something of a crash course in the various ways women are stereotyped and disregarded for being powerful, at work and beyond: she's been called "shrill," held personally responsible for her husband's infidelities, pegged at a cold and calculating Lady MacBeth-type. This all came to something of a head at Monday night's debates, when Trump decried Clinton's simply doing her job — i.e. running negative ads about her opponent, a key part of the job of presidential nominee — as "not nice": "It's not nice. And I don't deserve that....But it's certainly not a nice thing that she's done."

How did that go? If it worked, you have a much more vivid imagination than me, because I have an easier time imagining Rick Perry and Rick Santorum standing in front of the Lincoln Memorial and breaking into "All That Jazz" from the musical Chicago than I do imagining any male politician trying to make another male politician look bad in public by claiming that they are not "nice."

However, flip the genders around a bit, and it becomes painfully easy to picture — many women who have raised their voice in any capacity in a work setting have been painted as "not nice. " A 2014 study of 248 different workplace performance reviews from 28 different companies found that "[o]nly 58.9% of the reviews submitted by men contained critical feedback, compared to 87.9% of those submitted by women" and that of that feedback, words like “bossy”, “abrasive”, and “strident” turned up in 71 out of 94 critical feedback pieces received by female workers, but only two out of 83 critical feedback pieces received by male workers. In fact, the word "abrasive" specifically showed up in 17 reviews for female employees, but zero reviews for male employees.

And this expectation that women be "nice" isn't just limited to the work place. As almost any woman who has ever walked down a major street before knows, lots of men feel entitled to enforce a level of "niceness" among women by telling them to smile (and, in my experience, sometimes call them "bitches" if they decline! Talk about "not nice," right?).

Clinton herself was the subject of a high-tech, political version of a man shouting "Smile!" out his car window, when several men — including media professionals and RNC head Reince Priebus — demanded that she smile at various points in her campaign:

There's nothing harmless about these cultural directives demanding that women smile, either; as Tatyana Fazlalizadeh, creator of StopTellingWomenToSmile.com told Huffington Post, “Men tell women to smile because society conditions men to think we exist for the male gaze and for their pleasure. Men are socialized to believe they have control over women’s bodies. ...Essentially what a man is saying when he tells a woman — one he doesn’t even know — to smile, is that his wants outweigh her own autonomy over how she exists in the world.”

When Trump Used Sexist Codewords To Question Her Abilities

Ah, "stamina." According to the Merriam-Webster Dictionary, "stamina" means "great physical or mental strength that allows you to continue doing something for a long time." To me, "stamina" generally refers to the ability to do something that involves a physical or mental time commitment that most people just can't swing, like doing a decathlon, or winning one of those contests where you have to keep your hand on an Xbox for 48 hours.

But in the context of Monday night's debate, "stamina" was clearly being used as a code word — a way to imply that Clinton failed to possess some kind of inherent, natrual quality that all presidents need to have. According to Trump, in response to a question from moderator Lester Holt on Trump's previous comment that Clinton didn't "have a presidential look":

Hmmm, what does "stamina" mean in this comment? Is Trump talking about Clinton's ability to campaign while sick with pneumonia? Is he talking about her ability to, I don't know, keep her hand on an Xbox for 48 hours straight (which I'm sure she could do if a national security situation required it)?

My guess is, the word he actually is invoking when he says "stamina" actually starts with a "p," and I am not talking about "presidential bearing." But for many women, being criticized for other supposed failings — when the person criticizing you is actually criticizing you for not being a man — is common. Have you been called "aggressive" at work or at school, for doing things that seem like they would have gotten you praise if you were a man? How about "abrasive"? Have you been told you have "resting bitch face" just because you don't grin like you just had five consecutive orgasms every time a man talks to you? Have you ever been told that your clothing was "too revealing," when all it revealed was that you had breasts (oh no! The secret is out!)? Most women are unfortunately familiar with being criticized, personally and professionally, with lots of terms that all essentially mean the same thing: "I would like you better if you were a man."

Will the debate — and the vast media coverage that these sexist moments received — change our workplaces and lives? I don't know; I hope so, but I also have seen enough other moments when sexist behaviors drew great media attention, only to yield little real world change, to not get my hopes up. However, Clinton's experience at the debates should change one thing — from here on out, I do believe that it will be harder for people to tell women that our experiences with workplace sexism are all in our heads.