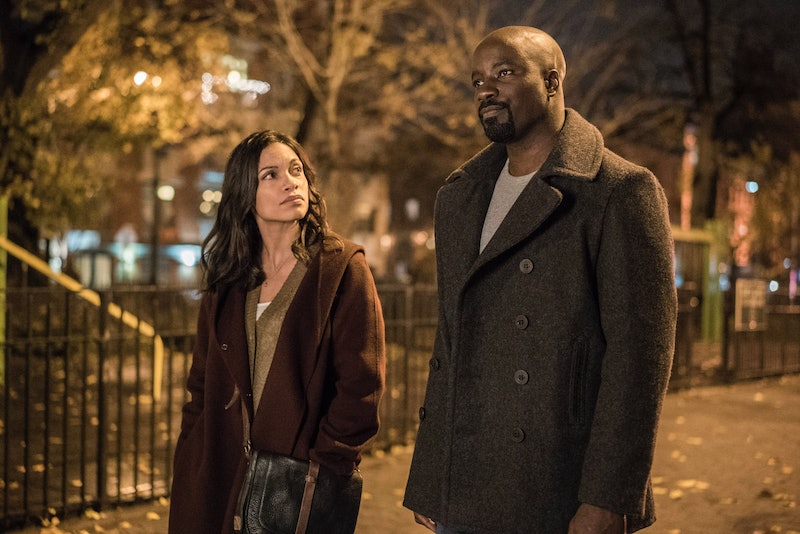 Part of what makes the Marvel Cinematic Universe so fun is seeing the unexpected ways various franchises cross over, sharing heroes and villains and storylines between them. So far, the most surprisingly strong connection within Netflix's offshoot of the MCU has been Rosario Dawson's Claire Temple — a regular, non-superpowered nurse who was first introduced as a supporting character in Daredevil, popped up in a cameo in Jessica Jones, and will now have a major presence in the upcoming Netflix original program Luke Cage . But what exactly will she be doing in her third superhero series? Will Claire Temple and Luke Cage hook up?

That might seem like a silly question, given that both characters already have romantic entanglements with other characters within the MCU — Claire had a fling with Matt Murdock (aka Daredevil), while Luke Cage had a complicated relationship with Jessica Jones — not to mention the fact that their love lives are not necessarily the most interesting things about these complex characters. But if you're expecting things to remain platonic between Luke and Claire… then you might be in for a bit of a surprise, given that Claire Temple is actually one of Luke Cage's most significant love interests in the Marvel comics.

On the page, the two characters met after Dr. Claire Temple opened a clinic called the Storefront alongside Dr. Noah Burstein (the scientist who had inadvertently given Luke his abilities) and they frequently tended to the hero after his tussles with bad guys. Over time, Luke and Claire fell in love, she got kidnapped, he rescued her, et cetera, et cetera, until eventually they broke up — as these things tend to go.

But the MCU is known for riffing on its source material rather than being a faithful adaptation; so just because Luke and Claire get together in the comics doesn't necessarily mean their onscreen counterparts will, as well. In fact, the character that Rosario Dawson is playing isn't just Claire Temple; she's playing an amalgamation of both the doctor who falls in love with Luke Cage and a character named Linda Carter — known as the Night Nurse — who is more closely associated with Daredevil. Given this blending of the source material, there's no telling exactly who Claire's storyline will play out in Netflix's version of events.

Furthermore, Luke Cage is also introducing a new character named Misty Knight, an NYPD detective who (in the comics) winds up teaming up with Luke after she uncovers his secret. There was never anything romantic between Luke and Misty on the page, but that doesn't necessarily mean things will stay that way for the small screen adaptation. Their tender interaction in the above trailer certainly doesn't rule it out, at least.

So while the show could be moving in a different direction with Luke's love life, I wouldn't count on it. After all, Matt Murdock has moved on to a romance with Karen Page and things are probably irreparable between Luke and Jessica (who killed Luke's wife while under Kilgrave's influence). And Claire is just too important a figure in Luke Cage's comic book history to ignore. It would make sense for the two damaged characters to find solace in each other's arms. Let's just hope that Claire won't be killed in the crossfire (something all too common for comic book love interests), because we need her to keep kicking butt throughout Netflix's Marvel universe from now until forever, thank you very much.

More like this
'Bridgerton' S3 Teases Exciting Social Season For Penelope Featherington
By Bustle
A 'Grey's Anatomy' Alum Will Join Negan & Maggie's 'Walking Dead' Spinoff
By Alyssa Lapid
Daryl's 'Walking Dead' Spinoff Will Take Place In A Bizarre Location
By Grace Wehniainen
The 'Firefly Lane' Book Ending Teases Way More Tears To Come In 2023
By K.W. Colyard
Get Even More From Bustle — Sign Up For The Newsletter