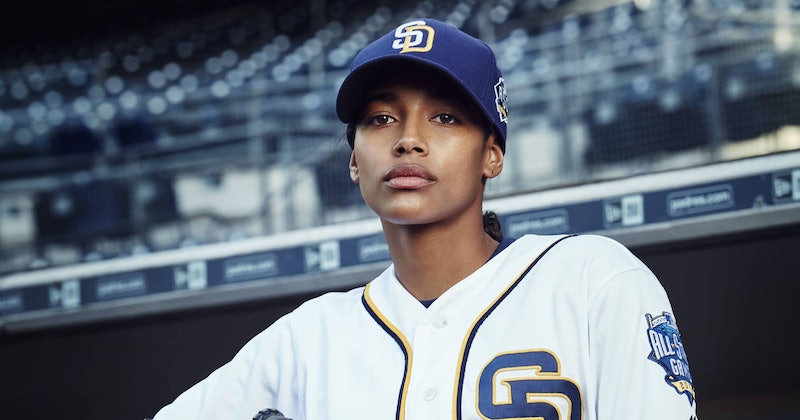 One of the reasons that I love watching the Olympics so much is because I get to watch women engaging in sports that aren't so readily available to watch throughout the rest of the non-Olympic years. It's inspiring to not only see women fighting their hardest and doing their best at physical competitions, but it's also moving to see how much young girls are inspired by the female athletes they get to see on television. TV rarely makes the showing of women's sports a priority, and even fewer fictional programs tend to tackle the subject — which is why I'm so excited about Fox's new series Pitch, which chronicles the (sadly fictional) story of Major League Baseball's first female player. And now that I've gotten a glimpse of what such an achievement could look like if it were to happen in real life, I can't help but wish that Pitch wasn't fictional. If it were a true story, could it help inspire a movement to make more people care about and celebrate women's achievements in male-dominated sports?

I'd like to think so. Pitch stars Kylie Bunbury as Ginny Baker, the MLB’s first professional baseball player, who pitches for the San Diego Padres. The series was produced in partnership with Major League Baseball, so it's not as if the organization is oblivious to the idea of women playing in a male-dominated sport, nor is it shrugging the premise off as a gimmick. It's handling Ginny's situation with the seriousness that the issue deserves, and examining the sexism that would no doubt come along with a woman playing on a traditionally male team. And the good news is that it's also fun as hell to watch. For any baseball fan looking for a new TV show to love, Pitch is the answer — the action is tense, and the excitement is on the level of any beloved baseball movie (though for obvious reasons, I'm partial to A League of Their Own).

But Pitch's message is the most important thing about it. Times have changed for female sports fans. We're no longer outcasts at the stadium, and the number of female sportscasters and reporters seems to be ever growing. But women's sports still tend not to be taken as seriously as male ones, and despite the popularity of athletes like Serena Williams and Simone Biles, it's rare to see female athletes get the attention and respect they deserve. As a fan, it's frustrating to have women excluded from the sports you love, and for the athletes, it must be incredibly difficult to have their gender determine their popularity. But watching the premiere of Pitch in September, I got so excited seeing a female athlete take center stage in a male-dominated sport that I got goosebumps. Seeing Ginny Baker walk out to the mound was thrilling, and like a long time coming. I might as well have been holding a supportive sign like the little girls in the stands while sitting in my living room. I cursed and cheered and shouted at the show like I was watching a regular baseball game — only this time, I was watching a woman throw those strikes.

Soon, though, my happiness came crumbling down when I remembered that Pitch is just a fictional TV show. But what if Pitch can be one of those instances when art influences reality? People don't tend to imagine the possibility of something until they see it in action, so now that Pitch is on TV, perhaps more girls and women will think about entering "male" sports as a real possibility. Before Pitch premiered, Fox put out a promotional video where reporters asked several kids if women could play for the MLB. One little boy says, "I don't think so, because every baseball game I see in person or on TV I've never seen a girl play." He's never seen it happen, so he's never imagined it's a possibility. But all it takes is a glimmer of what could be, even in something fictional, to inspire kids to change their outlook. Just watch how the children light up in amazement at the footage from Pitch, and how their minds are suddenly changed.

Women playing in professional sports dominated by men isn't outside the realm of possibility, and perhaps Pitch can be the catalyst to make more people believe that it can, and should, happen. Besides, the conversation about women playing in the MLB is already an ongoing one. A professional minor league team, the Sonoma Stompers, has already signed two women in 2016, and in 2015, 16-year-old Melissa Mayeaux became the first woman on the MLB's international registration list. So it's not a matter of if, but when. As ESPN's Jayson Stark told Sports Illustrated, "Why wouldn’t we see a woman pitching at some point? Ever seen Jenny Finch throw a softball? One of these years, I bet we’ll see a sidearming situational left-hander who’s a woman. Or something like that. That would be awesome."

But like any movement, there's got to be someone leading the way. Perhaps it will be those new female Stompers players, or more teenage girls refusing to play softball and demanding to be allowed to play baseball instead. Or maybe it can be Ginny on Pitch, leading a TV show that embraces the very possibility of women in the MLB. There are always going to be people who oppose women in sports; in September, a high school boys soccer team forfeited their game rather than play against another team that had two girls. But one day, and hopefully one day soon, a woman like Ginny Baker will walk out onto a baseball mound and throw a strike, inspiring young women all over the world. Perhaps Pitch will have helped pave the way.