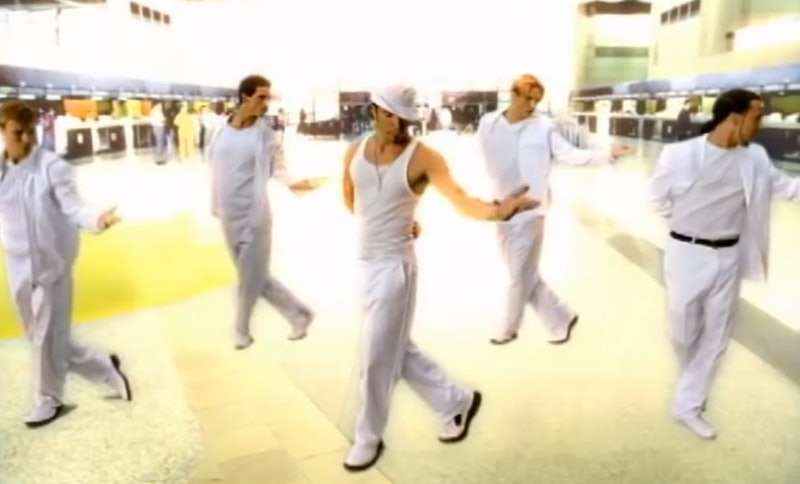 Turns out, like so many others, the Backstreet Boys have no idea what "I Want It That Way" is about. BSB ruled the chart with this pop song off their 1999 album, Millennium, a song that's so undeniably good that it's still beloved in this new millennium. However, throughout those 17 years, they've also been trying to figure out what Swedish songwriter Max Martin was trying to say about love.

“Well it’s funny, we actually were OK with the lyrics when we heard it first,” Nick Carter told the Huffington Post. “And then the president of JIVE records at that time ― I mean he’s a genius ― but he and some of the A&R people wanted to change the lyrics.” The boy band did record an alternate version of "I Want It That Way," but it just didn't have the same feel as the, some may say, nonsensical original version. "Sometimes you over-think things,” Kevin Richardson said in this same Huffington Post interview, adding, "sometimes you just got to go with what feels right.”

And that right there seems to be the explanation for most of Max Martin's hit songs: they feel right to our ears, but for our minds, there's something just a little bit off. Martin has written 22 No. 1 hits, according to Billboard, placing him just behind Paul McCartney (32) and John Lennon (26) for the songwriter with the most chart-topping hits. But, despite being one of the greatest songwriters of all time, it's definitely worth looking a little closer at a few of Martin's biggest songs that, when you really think about them, just don't make any sense.

The chorus of this one may be a bit of a head scratcher. What does Spears really mean when she sings "Hit me, baby, one more time"? Well, it turns out this one got lost in translation. According to John Seabrook's book The Song Machine, which looks at the history of pop music's most famous songs, Martin thought "hit" was slang for "call" in America. So, it really should be "Call me, baby, one more time," but, let's be honest, it doesn't quite have the same ring to it.

Look at the lyrics for this track off Grande's album My Everything, and you'll soon notice there's a pretty serious grammatical mistake in the line "Now that I’ve become who I really are." It's one that Grande knew about and even fought Martin over. She told Time, she let Martin know she wasn't going to sing a grammatically incorrect lyric. "Max was like, ‘It’s funny — just do it!’" she explained. "I know it’s funny and silly, but grammatically incorrect things make me cringe sometimes.”

While Grande learned to live with that line, others still had a bone to pick with the lyrics: "I only want to die alive, never by the hands of a broken heart.” Clearly, hearts don't have hands, and you can't die and be alive at the same time. But, again, Grande had an explanation for this one: "It means life is so short — there’s no reason to not enjoy it and there’s no reason you should be anything but yourself."

While "I Want It That Way" may be the biggest culprit of confusing lyrics, it's not the only BSB song that deserves a second look. On this Martin-penned classic off Black and Blue, he sounds a lot like Dr. Seuss, thanks to the line, "Sadness is beautiful/loneliness is tragical." Yes, tragical is a real word — it's an adjective meaning "characteristic or suggestive of tragedy" — but it isn't one that's used much now. Most people would just say tragic.

“I kept taking/Taking the blame," Lewis sings, "And it’s soring me up inside." Soring, really? The word means to inflict intentional pain, and is often used in connection with horses. Lewis isn't talking about horses here, so it's a very odd choice of words. Since Martin has never talked about this song, we'll have to try and guess why he used it.

As much fun as it is to sing, it's worth questioning what "feeling 22" really means. How is it so different than 21 or even 23? Swift said in 2013 before her album Red dropped that "22" was about the summer she had just had with her friends. The explanation being that, at the time, Swift was actually 22 herself, so it's very specific to her. Sure, that may answer this question, but for all of us over 22, we're still wondering if it applies. It does right?

On this track, Spears sings, "Tell me, I’m not in the blue.” Now, this color choice is interesting, being that "in the red" is usually how Americans refer to someone who owes money and "in the black" is used to describe someone who doesn't. But "in the blue," there is no real meaning for that, which means you can make one up. I'd like to think it's that she doesn't want to be stuck out at sea, just floundering in the blue waiting for her love to realize where she's gone.

The Backstreets Boys want everyone to know on this song, “We’ve got it goin’ on for years." But I'd like them to know that it should be "we've had it goin' on for years."

There are a lot of confusing lines in this track off Perry's 2013 album, Prism. "This love will make you levitate/Like a bird/Like a bird without a cage," she sang. "But down to earth." You know, one of those caged earth birds. But let's also talk about how she's "coming at you like a dark horse." Dark horses often fly under the radar, but not according to Martin, who turns a dark horse into a prize stallion. J

If you think too hard about these songs, it's easy to be confused. But Backstreet Boy Kevin Richardson told the Huffington Post that, despite the lyrics not making much sense, fans still relate to the feeling of the song. “I talk with fans that the song makes perfect sense to them," Richardson said. "Because everyone interprets lyrics differently and every song moves people differently." Basically, it's best to let your heart, not your mind, take the lead when listening to Max Martin's songs.