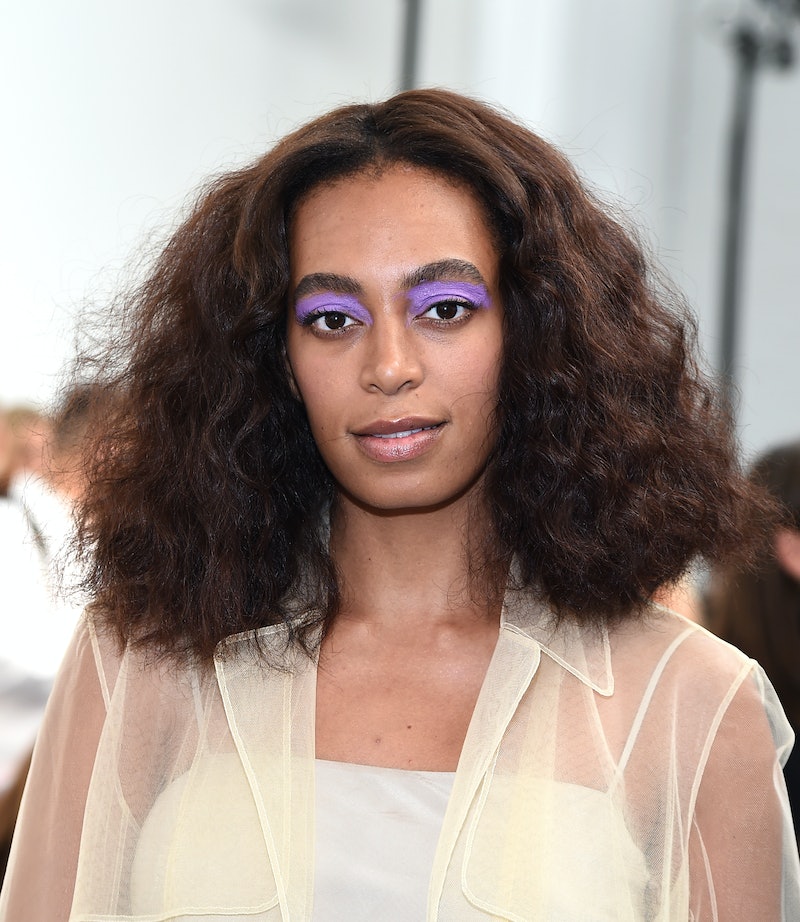 By any chance, have you heard Solange's new album A Seat At The Table yet? If not, I hope you have a truly great reason — an emergency dentist appointment? A broken leg? Or maybe you're nursing an injured puppy back to health? — because this album is everything. If you have an internet connection and haven't streamed it yet, there are very few excuses that will wash with me. But if you're a time-strapped individual, then maybe you'll want to know what the most important A Seat At The Table song to listen to is. I'll cut straight to it: Personally, I believe the song "Borderline (An Ode To Self Care)" is the one song you need to hit play on right here, right now.

It may not be as melodically compelling as some of the other tracks on the album, but the song's message is vital. Solange takes on the tricky, nuanced topic of self-care. On the surface, the song appears to be about a woman taking a break from her relationship in order to provide time and space to think. But, beyond this narrative, I believe it functions as a rousing political anthem in an era in which, more than ever, self-care isn't a luxurious extra for those with money and time to spare. It's an absolute must.

When we examine the lyrics of "Borderline (An Ode To Self Care)", lyrics like the following make it seem like a pretty cut-and-dried take on the good sense in breaking something off when it's not working to make space for yourself:

But I believe the shout-out to "self care" in the title flags up the song's inherently political aspect. African-American writer and civil rights activist Audre Lorde was one of the first people to use a description of self-care as a political term. She famously said, “Caring for myself is not self-indulgence, it is self-preservation, and that is an act of political warfare.” And she wasn't the only woman concerned with civil rights to set self-care in that context: According to Sarah Mirk in an article for Bitch Media, social justice activist Angela Davis stated in a speech that Mirk attended that the most radical lesson she had learned from today's activists was learning how to care for herself:

"Self-care has to be incorporated in all of our efforts. And this is something new. This holistic approach to organizing is, I think, what is going to eventually move us along the trajectory that may lead to some victories."

Arguably, self-care in Solange's song can be interpreted in both a personal and a political context. We can see this in lines that don't totally make sense in the context of the song as a narrative about a relationship, but which function perfectly if the song is intended as a subtly political track:

While these lines could simply be about it being more comfortable to be in a relationship than being out and about in the world as a single woman, the word "war" seems too extreme in this context. The word implies violence and hurt and people losing their lives, much as members of the African-American community genuinely are, and have been, doing at the hands of police. On this level, Solange is stressing just how vital self-care is. It's not simply about face masks and scented candles and treating yourself, it's about putting yourself first — something that could be perceived as a radical act for black women in particular.

In an article for the Feminist Wire, Dr. Shanesha Brooks-Tatum stresses, purely from a statistical perspective, how necessary self-care is for black women:

...our depression rate is estimated to be 50 percent higher than white women’s. Within the realm of physical health, black women face particular challenges around diabetes, heart disease, and high blood pressure. One in four black women over the age of 55 have diabetes. Black women die from heart disease more than any other group in America.

She also stresses how, thanks to historical factors, incredibly difficult self-care can be to implement:

...for centuries black women worldwide have been taking care of others, from the children of slave masters to those of business executives, and often serving today as primary caregivers for the elderly as home health workers and nursing home employees.

As such, while following Solange's advice to take "an intermission," having "the world to think" and going "ahead to take some time" might not seem all that intensely political on a first listen, it's so much more radical on a close-reading. In a year as troubled as this one, Solange's song isn't just a sweet ditty about breaking off a relationship that isn't working. It's about women putting themselves first. Every woman, regardless of race, needs to hear this message, but coming from the mouth of a black woman for black women during a period of intense social and political turmoil for the black community makes it even more powerful.