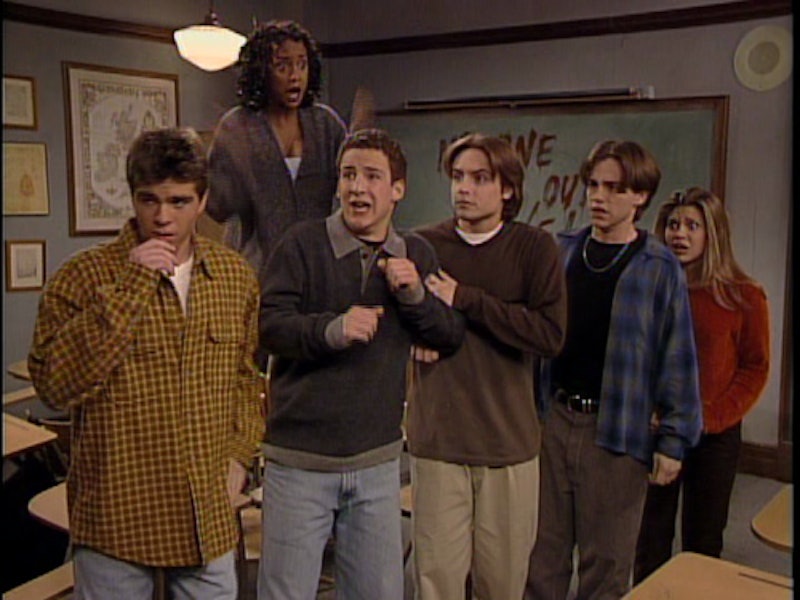 One of my absolute favorite things about Halloween is watching Halloween episodes of my favorite shows. The holiday tends to inspire the best in TV writers as they put their characters in unexpected horror movie settings, have fun with costumes, and generally make their episodes a special treat for fans. In the '90s, teen shows had some of the best Halloween episodes out there. From comedies like Boy Meets World to the super serious My So Called Life, nearly every teen show of the era had at least one Halloween episode, and they were almost all perfect Halloween fun.

Now that fall is finally here again, it is time to revisit all those amazing Halloween episodes of days gone by. The Scream parodies, the ghostly guest stars, and all of those classic '90s costumes are just waiting to be rediscovered. Seriously, there is no combination more winning than teen angst and Halloween. I know all those big budget horror movies are tempting you in October, but you should consider staying in and watching your favorite teen show's Halloween episode instead. Not only is it cheaper, it is guaranteed to give you a nostalgia high almost as good as the sugar highs you got from trick or treating when you were a kid.

If you need a good place to start, you cannot go wrong with these 13 flawless '90s Halloween episodes from beloved teen shows.

Leave it to Buffy to use the holiday as an excuse to change up the entire dynamic of the show. A Halloween shop turns out to be selling very special costumes that turn the wearer into whatever costume they chose. As a result, Buffy becomes a damsel in distress, Xander becomes a serious soldier, and as a ghost Willow gains the confidence to take charge and do what needs to be done to put Sunnydale back in order.

This is the first Halloween style episode on the list that didn't actually air in October, and it won't be the last — what can I say, TV scheduling is weird sometimes, but an episode as juicy as this one should not be excluded on a technicality. Dawson's Creek wasted no time taking on The Blair Witch Project, and the result was an episode packed with scares and self discovery.

3."Tricks And Treats," Freaks And Geeks

If you want a Halloween episode to kick you straight in the feels look no further than this stellar outing focused on Sam and Lindsay struggling with the saddest, most frustrating parts of growing up.

A melancholy, ghostly encounter for Angela allowed the show to flirt with the supernatural while staying grounded in its ultra real examination of '90s teen life.

5. "And Then There Was Shawn," Boy Meets World

A Scream-flavored nightmare for Shawn conjures up a special guest star in Jennifer Love Hewitt, a meta exploration of horror movie tropes, and one of the most genuinely fun episodes of Boy Meets World.

6. "Hex And The Single Guy," Fresh Prince Of Bel-Air

Clone hijinks, Sabrina literally dressing up as a witch, and an ending with serious emotional oomph makes this particular Sabrina the Teenage Witch Halloween episode special.

Using Alfred Hitchcock movies for inspiration, this episode sends Eric and his friends on a strange, trippy Halloween no viewer will ever forget.

9. "Halloweenie," The Adventures Of Pete And Pete

Big Pete is confronted with the age old question: how old is too old for trick or treating? Of course, this would not be an episode of Pete and Pete without a extra shot of weirdness added in with the emotional beats.

Tia and Tamera's hunt for the perfect Halloween party turns into a crazy trip through the city. If you have ever over hyped a Halloween party in your head, you will love this episode.

11. "Help For The Lovelorn," Felicity

This black and white stand alone episode aired in January, but it is such a psychological masterpiece of an episode it deserves a place in any Halloween masterpiece. Twilight Zone fans, this one is for you.

Nightmare fuel, thy name is Stevil. This twisted Halloween outing scarred many '90s kids for life.

Candace Cameron Bure and Melissa Joan Hart guest star in this episode where Jack falls for an actual witch. As you might imagine, hilarity and '90s nostalgia ensues.

Indulge in a bowl of your favorite candy and a giant dose of '90s nostalgia with these amazing Halloween.