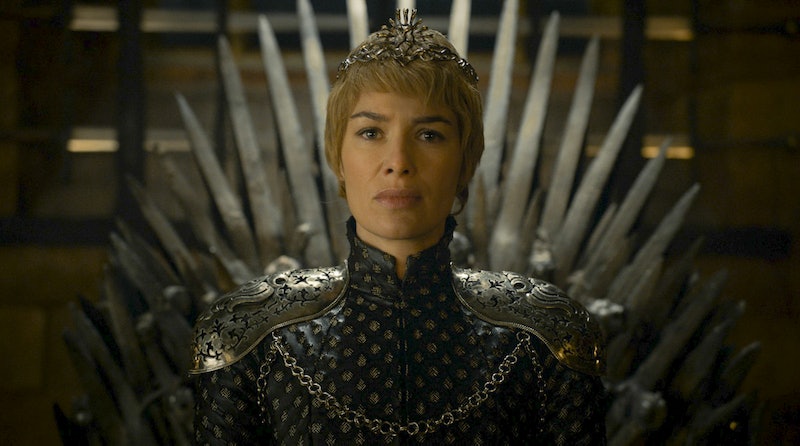 There should be no doubt in anyone's mind that Season 7 of Game of Thrones is going to be lit. Winter has come and it's about to devastate all of the Seven Kingdoms. There's going to be a lot of drama with White Walkers, of course, but I'm almost more worried about what will happen if and when Cersei Lannister and Daenerys Targaryen meet up. The prophecy from Cersei's flashback visit to Maggy the Frog comes to mind: "A younger, more beautiful queen would take all she holds dear." Daenerys is definitely younger than Cersei, and though beauty is really in the eye of the beholder, it stands to reason that she will be the queen to take Cersei's dear possessions away. Both Dany and Cersei are divas who demand respect, and I can't see them co-habitating the same kingdom without starting a few wars.

There are a multitude of ways the blonde queens could hook up, hang out, or just attempt to murder each other. As big as Westeros is, it also seems pretty small, as everybody seems to keep running into each other on the King's Road all the time (seriously, how many times can a character run into their nemesis in a tavern before I start calling foul?). The following are some of the ways the Lannister and the Targaryen queens could meet up in Season 7.

At the end of Season 6, Daenerys was on a boat with a huge army, headed to take over Westeros. It makes sense to head to the capital, which just so happens to be where Cersei is currently holding court.

2. They Could Meet In A Tavern While Traveling

Everybody in Game of Thrones seems to go to the same taverns when traveling because they are always bumping into each other. What would the two queens do if their parties co-mingled?

3. Both Could Come To Dorne

Varys isn't schmoozing in Dorne with the murderous Sand Snakes for nothing. Instead he's prepping them for a new queen, Daenerys. The Mother of Dragons might be headed that way to talk things over with her new recruits. Meanwhile, with news of the rebellion in Dorne, Cersei will definitely feel incensed to attack, or have an ice-cold planning meeting in Dorne. I could definitely see the divas working their wiles against each other in this context.

4. Daenerys Could Have A Vision Of Some Sort

There seems to be a definite connection, even if literary, between Cersei and Aerys Targaryen, who both decided setting King's Landing on fire with magical flames was a great idea. Since Dany had the weird visions in the House of the Undying, and Westeros does have some magical properties, she could totally totally have a Cersei/Aerys vision.

Tyrion is still on Cersei's most-wanted list for allegedly murdering her son and admittedly murdering her father. It probably doesn't help that he's now assisting her rival for the Iron Throne. If Cersei scoops up Dany's Hand of the King for revenge, chances are the Targaryen will want Cersei to suffer. Meanwhile, she would not hesitate to be present for the suffering. I wouldn't be surprised if dragons were included in the rescue attempt.

6. They Might Never Meet Because Jaime Could Kill Cersei Before Daenerys Arrives

The Maggy the Frog theory also includes the line, "and when your tears have drowned you, the valonqar shall wrap his hands about your pale white throat and choke the life from you." "Valonqar" is High Valyrian for "little brother" which technically includes both Tyrion and Jaime Lannister. Judging by the look on Jaime's face as he witnessed his depraved sister squatting on the Iron Throne, he might be getting back into the king-slaying business.

Some people are theorizing that Euron Greyjoy has a dragon egg because he mentioned looting the magical item on a journey to Valyria in A Feast for Crows. These same people are also thinking that Euron and Cersei are going to team up, get married, and divide the kingdom between themselves. Though Euron claimed he threw the dragon's egg into the sea, that seems doubtful — because who would do such a thing? If Cersei teamed up with Euron and had a dragon, things wouldn't look so good for Dany.

If Cersei does join forces with Euron, then according to A Song of Ice and Fire, the Ironborn jerk might have something else up his sleeve — a dragon's horn which can be used to control all dragons, to be precise. Since the last guy in the books who blew the horn for Euron, Cragorn, burned to death mid-blow, it seems that someone who is immune to fire might be the perfect candidate for Euron's evil dragon horn plans.

Cersei with power is a terrible thing, but luckily Daenery's Hand of the King is incredibly aware of his sister's insanity. He will most likely stop at nothing to make sure his sister can't hurt anyone else. It would certainly help that he has all of Dany's armies backing him up.

The Lannisters and Targaryens go way back so much so that Cersei even thought she was going to marry Rhaegar when she was young. It's totally possible that in Season 7, Bran will flashback to some Targaryen action. It wouldn't be surprising if that flashback includes a young Rhaegar, a baby Daenerys, and a teen Cersei.

11. They Could Try To Broker A Peace Deal

Though both women are very unforgiving and can be cold-blooded with their conquering tendencies, there is always a chance Daenerys will put the safety of their people first instead of starting a huge war. Maybe when Khaleesi was saying she was going to "break the wheel," she meant she would was going to try to foster peace throughout that nation. The fact that Cersei is a woman who has made it so far in her plans for queendom could totally be a great asset for the Mother of Dragons. Dany knows better than anyone to keep one's enemies very close, and even if Cersei swears fealty, she is usually an enemy.

If Cersei and Dany meet up, it will undoubtedly be the emotional, mental, and maybe even physical showdown of a lifetime. There are so many ways the meeting could go down, but whatever happens, this character crossover will be intense. images: HBO (2) Giphy (9), a-melara/Tumblr