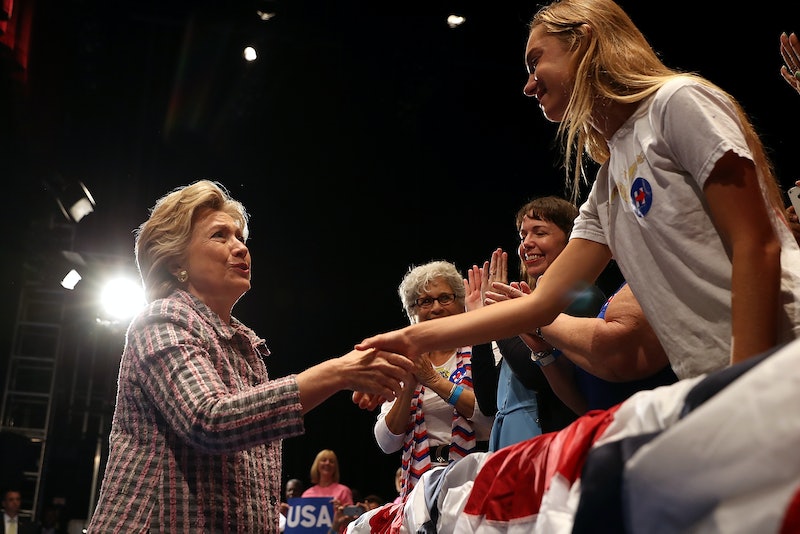 Election years come and they go, and the American public meets political figures from many points on the party spectrum. And, each election year, there are certain questions that feminists want all presidential candidates to answer — this year arguably more than ever. One of the things the last few months has taught us is that transparency from presidential candidates is important upfront, particularly when it comes to their stance on issues affecting everyone other than straight, cisgender, often wealthy, privileged, white men. Politicians tend to flip-flop on these issues during their careers depending on the tide of public opinion, so it's vital that we maintain an open dialogue so we always know how these views could affect their policy making.

We started out the 2016 election year with a sizable pool of candidates. On the Republican side, we watched Jeb Bush, Ben Carson, Ted Cruz, Carly Fiorina, and about a dozen other politicians lose the bid to real estate mogul slash braggadocio Donald Trump. On the Democratic side, well, let's be real: It was only ever a race between Hillary Clinton and Bernie Sanders, with the former ultimately earning her name on the ballot. While debates over the course of the primaries certainly gave us some insight into the platforms all these candidates endorsed, they often failed to outright answer many pressing questions that speak directly to feminism.

So, here we go. Whether its this year, eight years from now, or 32 years in the future, these are some of the questions feminists want (and need) presidential candidates to be forthcoming about when asked.

1. How do you plan to address the gender pay gap?

Women are still only earning, on average, 79 percent that which their male coworkers do, despite parallel experience and education — and the disparity is even more dismal for women of color. The Obama administration put into place some important legislation like the Lilly Ledbetter Fair Pay Act to help close the gap, so presidential candidates should be able to outline policies and programs they intend to enact to keep the momentum moving in the right direction.

2. What do you propose in the way of paid parental leave?

Starting a family may not be on your mind right this minute, but it could be at some point during the next president's tenure. And while paid maternity leave is guaranteed in at least 178 countries around the world, the United States isn't one of them. Out of the 196 countries globally, there are only seven with no legislation in place requiring paid maternity leave: Suriname, Marshall Islands, Micronesia, Papua New Guinea, Tonga, Palau, and the United States of America. We are officially the only developed country in the world that doesn't require companies or the government to provide new parents with any financial assistance.

3. Similarly, would you make affordable childcare and pre-K programs accessible to all new parents?

Whether or not a parent has access to childcare can mean the difference in being able to support their family. Considering America offers no paid maternity leave, most women cannot afford to take the optional 12 unpaid weeks the good ol' U.S. of A does reserve — and paternal leave is practically non-existent. Going back to work so soon means finding childcare for the baby, which can be cost-prohibitive for many families. It goes without saying that no one should have to choose between their career and taking care of their children — but they often do, and it's disproportionately women who are affected as well. (Research has shown that women, even when working full time, still take on the majority of household chores and childcare duties.) Presidential candidates absolutely need to address this issue with feasible solutions.

4. What is your stance on reproductive rights, and what kind of legislation backing that stance do you support?

If a candidate has not consistently voted to uphold Roe vs. Wade, we want to know why. We want to know why. If a presidential candidate has not supported reproductive rights, and our right to the agency of our own bodies, it is indicative of troubling and likely sexist rhetoric. Will this candidate ensure women's access to Planned Parenthood? Will they strive to protect Planned Parenthood from de-funding? Inquiring minds need to know.

5. Would you endorse a nationwide minimum wage increase?

According to the Department of Labor, nearly 6 in 10 minimum wage-earning employees are currently women. This is a clearly a problem, and one which makes it very difficult for someone to provide any sort of financial stability for themselves or their families. And since raising the minimum wage also leads to a reduction in child poverty in single-parent homes, this is a significant feminist issue on more than one front.