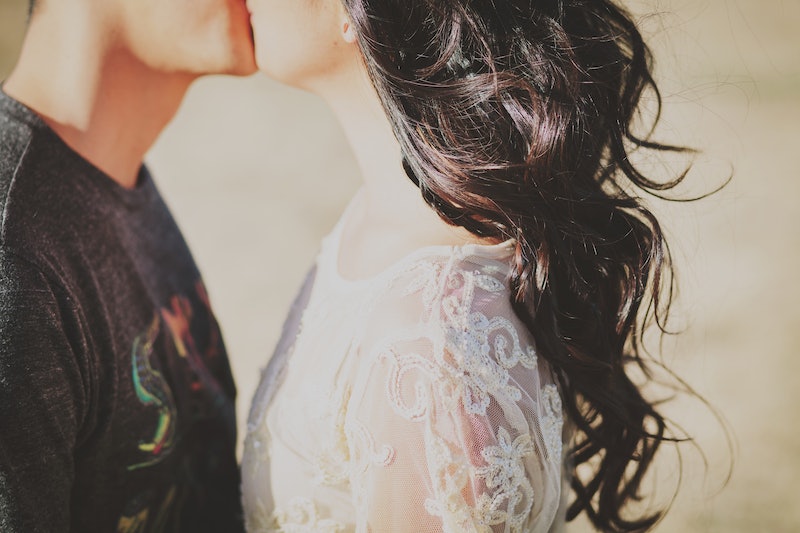 As you’ve likely learned from experience, sexual compatibility is kind of a big deal in most relationships. Heck, being compatible in bed is pretty important whether you’re in a relationship with the person you’re having sex with or not — because we’re all vulnerable during sex in the first place, and sex is supposed to be fun for everyone involved. Fortunately, not every sexual experience with a new partner has to be shrouded in mystery. Believe it or not, there actually are a few ways to tell if you’ll be sexually compatible with someone that don't include getting naked with them.

Although, admittedly, getting naked is one way to do it. Ultimately, there’s only one thing that can help you know with absolute certainty that you’ll hit it off with someone sexually, and that’s having sex with them. And some psychologists believe that perceived sexual compatibility is a greater indicator of both relationship and sexual satisfaction than actual sexual compatibility is.

That said, you can tell a lot about how someone will behave in bed just by paying attention to how they live their life. For example, if your Tinder date checks their phone every five seconds, then it’s safe to assume they probably wouldn’t be the most attentive lover. But that's just one of many weird ways to tell you won’t be compatible in bed.

1. They Don't Seem To Care About Their Appearance

Of course, I'm not talking about going makeup-free or sporting sweatpants on the regular — because there's nothing wrong with choosing comfort and a natural look over skinny jeans and a smoky eye. That said, if you almost always take the time to shower, don clean clothes, and gargle mouth wash before interacting with other humans, but your crush clearly doesn't, that's actually a pretty strong indicator that they may not value your pleasure in bed.

It makes sense when you think about it — if someone clearly doesn't take very good care of themselves, then it's safe to assume that they probably won't take care you of you, either. I mean, it's pretty much Sex 101 that part of being a considerate lover is making sure you give a crap about grooming and hygiene. As sex therapist Mary Jo Rapini told Bustle, "If they smell good, have good hygiene and dress well that means they're sensitive to how they appear to others. If they're willing to put effort into self-care, they usually are more caring about pleasing their partner."

2. It Gets Super Awkward When You Hug Each Other

To be fair, being an awkward hugger isn't always indicative that someone is bad at sex; it could just mean they've never really liked hugging that much, or it might mean they're not particularly comfortable being affectionate in public. It's also possible that they're super attracted to you (you fox, you) and that's why they get all weird when you try to hug them.

But if hugging consistently feels awkward between you and the person you want to get with, that could be a sign that you two won't connect emotionally during sex. As Rapini put it, "If they're awkward with hugging or touching they may be more distant or unable to satisfy your emotional needs."

3. They're Glued To Their Phone

Unsurprisingly, if someone makes more of an effort to connect with their smartphone than with you, then it stands to reason that they probably won't be much fun in bed. As Rapini explained it, "If they're distracted with their phone, or other media, too busy with selfies to be into anyone else but themselves, or looking around and scanning the room when you're talking, they won't be able to engage well with you in bed."

Communication is everything during sex, and this remains true whether you're looking for something casual or hoping to fall madly in love. As Rapini told Bustle, when it comes to prospective sexual partners, you should always "Look for someone who is interested in how you feel, what you think and genuinely wants to be with you." So if your date/potential f*ck buddy/new crush is more interested in scrolling Instagram than listening to your stories, you shouldn't expect sex with them to be a treat. If you want to have good sex, then it needs to be with a person who clearly enjoys your company and genuinely cares about what you have to say.

4. One Of You Is Way More Adventurous Than The Other

OK, so this one's a little tricky, because you can't always tell what someone will be like in bed just by how seemingly adventurous, or non-adventurous, they are in life. Moreover, even if your ideal date is a stoned hike in the woods (guilty), but your partner likes to party hard in loud bars, that doesn't mean the two of you are sexually doomed. Again, it all depends on how well you communicate with each other, and what you are both willing to try between the sheets. That said, if the person you're interested in sleeping with rarely tries new things in their everyday life, then it's unlikely that they'll try new things in bed.

Additionally, if you and your date/friend/new boo have already talked about your sexual preferences, and you've discovered that they're way kinkier than you are (or vice versa), then you two might not be a great fit for each other in bed. As sexuality counselor and New York Times best-selling author Ian Kerner told CNN back in 2010, "In my experience, there are two types of people when it comes to sex: comfort creatures and thrill seekers." Kerner continued, "The former tend to prefer to keep sex within the comfort of their own homes, with one partner, sticking to a few tried and true positions and routines. And as the name suggests, thrill seekers are just the opposite. They want new positions and toys, different partners or locations, and more sex."

5. They Rarely (If Ever) Make You Laugh

Sharing a similar sense of humor is a huge turn on for most people (myself included), so don't expect to have mind-blowing sex with someone who almost never makes you laugh. Also keep in mind that studies have shown a direct correlation between humor and sexual pleasure. As Psychology Today reported back in 2015, women who perceive their partners as funny have more vaginal orgasms during sex. So if your date doesn't make you giggle, then the chances are decent that they won't make you come, either.