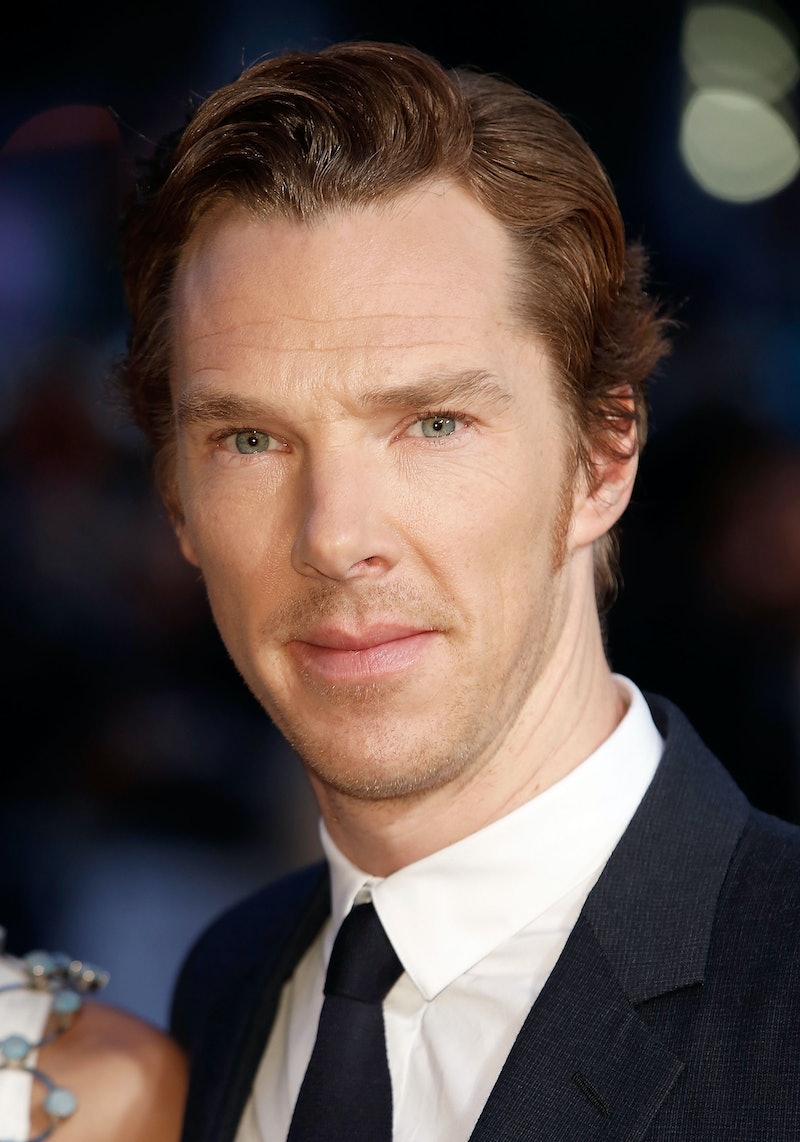 I know when anyone starts talking about fandoms, they run the risk of being the subject of an internet attack. But here's the deal: I am a fan of many celebrities who I adore and respect and admire, and I think it's fun to find a group of like-minded individuals. One of the most notorious fan bases is that of Benedict Cumberbatch, the Cumberb*tches, who I first heard of after I became a Tom Hiddleston fan. Hiddlestoners and Cumberb*tches run in similar circles, and some of them have taken fandom to dizzying and somewhat bizarre heights. In a new cover story for Vanity Fair, Benedict Cumberbatch admitted that while he does appreciate his fans, but he has an issue when his wife and child are subject to conspiracy theories. That's when things go a bit too far.

Being a celebrity in this day and age has blurred the lines of reality and fantasy, especially with the advent of "internet boyfriends" and Tumblr "favs." It is becoming increasingly common and easy to dissociate from the fact that these people are actually human beings with real feelings. Cumberbatch's Vanity Fair profile sheds light on how the line between obsession and adoration is becoming very blurred, but as always, the actor approached the topic with humor and respect.

The writer of the profile, Michael Schulman, shared with Cumberbatch a tweet that he found right before meeting up with the actor. It read: “Sometimes when I’m sad I picture a shirtless Benedict Cumberbatch slowly eating an apple fritter. Try it!” In response, Cumberbatch blushed and responded,

“Have you tried that? It wouldn’t work for me... I’m glad I’m bringing a ray of sunshine to an otherwise dull day, being imagined eating fritters shirtless. But, I don’t know, it makes me giggle. I don’t look at myself in the mirror and go, ‘Yeah, absolutely! I see what they’re saying!’ I see all my faults and everything that I’ve always seen as my faults.”

But the conversation about the fandom turned a bit serious when Cumberbatch spoke about the effect that the adoration has on him, particularly when it comes to his wife, Sophie Hunter, and their son, Christopher. Cumberbatch said,

"There are people who believe that my wife is a P.R. stunt and my child is a P.R. stunt... I think really it’s to do with the idea that the ‘Internet’s boyfriend’ can’t actually belong to anyone else but the Internet. It’s impossible he belongs to anyone but me. And that’s what stalking is. That’s what obsessive, deluded, really scary behavior is.”

It cannot be healthy to be expected to live up to the impossible standard from fans making up alternate realities for you via fan fiction, and insisting that his family is a P.R. stunt is disrespectful to his wife and could potentially be harmful to their son as he grows up. As a devoted fan, wouldn't you want him to be happy and healthy with his family? This behavior reminds me of the conspiracy theories that have surrounded One Direction singer Louis Tomlinson, as fans have actually questioned if his son, Freddie, is a real baby and not a doll. Seriously, it is not OK.

I think it says a lot about Cumberbatch in the way he embraces the sort of cult following that has grown around him. He understands that he has a responsibility to his fans, but he also knows that his life is different now. “Having a baby — it’s massive... And on a very unexpected level. Suddenly I understood my parents much more profoundly than I ever had before," he explained to Vanity Fair.

Cumberbatch's priorities have shifted and his fans should follow him on that path.