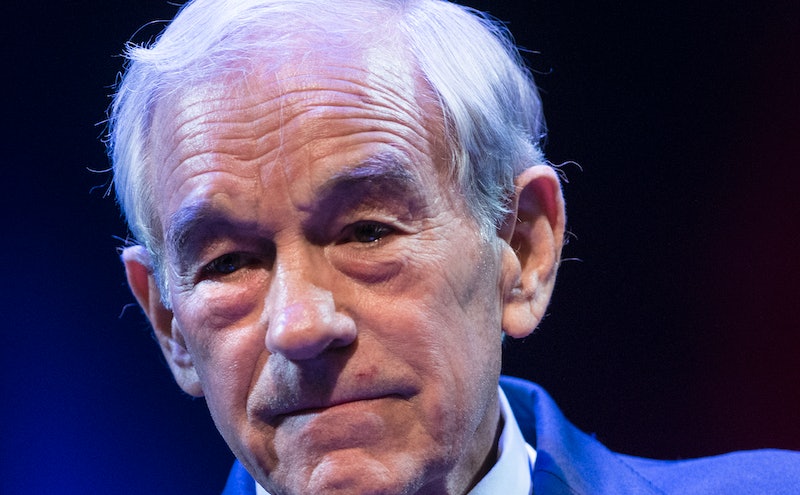 During an interview with MSNBC on Oct. 3, the longtime political icon of the libertarian movement and former Texas Congressman Ron Paul admitted that he is disappointed by Gary Johnson. Specifically, Paul said that he prefers the Green Party presidential nominee Jill Stein's foreign policy over Johnson's. His criticism of Johnson's lack of a "crisp libertarianism message" is hypocritical, considering Paul has run as both a Republican and a Libertarian (much like Johnson), and once bragged at CNN's 2012 State of the Union that, "I would say that I'm pretty mainstream." Coming from Paul, what exactly are the parameters for a pure libertarian message?

While Paul clarified that he isn't endorsing any presidential candidates at this point, he made it clear that he thinks Johnson "does not come across with a crisp libertarian message." He then went on to admit that Stein's approach to foreign policy fits into the non-aggressive principles of libertarianism: "She’s probably the best on foreign policy at the moment."

Known by many as the poster boy of the libertarian movement, former congressman Paul has run for president three times: in 1988 under for Libertarian Party, and in 2008 and 2012 on the Republican ticket. So conceptually, his fanbase would overlap with that of Johnson's, who was a member of the Republican Party until his 2011 conversion to libertarianism. Yet Paul's main issue with Johnson is apparently that Johnson wasn't spreading a pure libertarian message — something Paul admitted he found in none of the candidates.

It would be understandable to presume that Paul's disappointment is connected to Johnson's "Aleppo moment," when he revealed ignorance of the Syrian refugee crisis by asking, "What is Aleppo?" But Paul defended Johnson's mistake and said it should not be a disqualifying moment, according to TIME: "It doesn’t build confidence in the individual, but it’s not disqualifying. It does raise eyebrows and it puts question marks out there."

Paul tried to explained to The Washington Post what he considers to be a pure libertarian:

If you want to express yourself - I am voting for the non-aggressive principles that create the libertarian message. And that is, nobody can commit aggression. Individuals cannot, nor the government. Unfortunately, there's not a crisp answer.

Perhaps Paul will find a crisp answer when Election Day comes. Until then, considering the lack of specifics as to what Paul considers to be a "pure" libertarian, his criticism of Johnson comes across as a bit hypocritical.