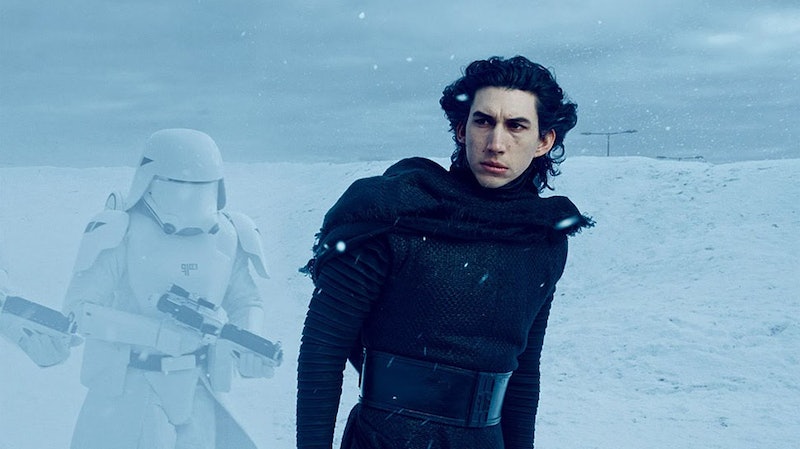 Disney and Lucasfilm may be prepping for the upcoming release of Rogue One: A Star Wars Story , but that isn't stopping young Jedis from looking toward the next chapter of George Lucas' classic Star Wars tale. Princess Leia, Luke Skywalker, Rey, Finn, and even BB-8, have a long journey ahead of them. However, before you jump to any conclusions about that journey, Adam Driver (Kylo Ren) wants to set the record straight for those looking to compare Episode VIII to A New Hope's successor, The Empire Strikes Back. The tone of Star Wars: Episode VIII is not going to be what fans will expect — and that's what we should be celebrating.

"What I said [in his interview with Collider ] was the tone of [Episode VIII] was different, I didn't say that it was gonna be in the vein of [The Empire Strikes Back]," said Driver during an interview with Vanity Fair . "I was using it as an example, so poor example. Next time I should say — I'm trying to think of another sequel to a movie that's good. When I read the script, it was not what I expected, in the best of ways."

So if you had any judgments or high expectations based around the Force Awakens and A New Hope comparison, then you should leave those judgments at the door. Instead, get excited for Rian Johnson's continuation of the new Star Wars trilogy sweeping the nation.

But if we can't compare the upcoming film to The Empire Strikes Back (or any other Star Wars movie for that matter), what kind of tone is Episode VIII going to have? Driver had nothing but reassuring positivity to send our way about the director's vision.

"Rian is coming into something that we kind of set up and he just took it to the next level in a really great way. He wrote it, too, and Rian’s writing is so clear. I learned a lot of things about my character through his writing... people always go 'oooh, it’s dark' but I don’t know that it necessarily is. It’s just different in tone in a way that I think is great and necessary but also very clear. He trusts [that] his audience is ready for nuance and ambiguity. He’s not dumbing anything down for someone and that’s really fun to play."

So, even if Episode VIII isn't in the same vein of The Empire Strikes Back, it's sure to be a treat for die-hard fans of the saga. We'll just have to wait until December 15, 2017 to see it for ourselves.