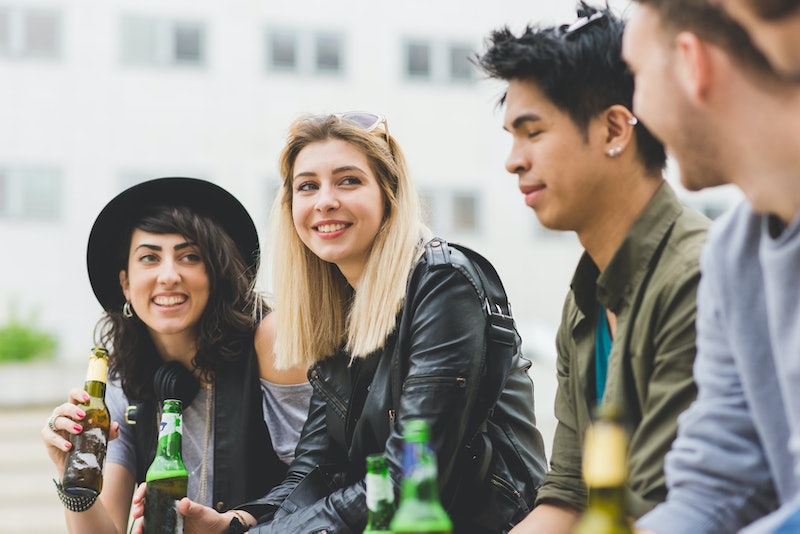 When it comes to money, Millennials always seem to have the short straw. Although we're the most educated generation in history, we're saddled with the worst financial prospects. But contrary to popular opinion, we are worried about it, and we do take our financial future seriously: New research suggests Millennials would trade having more money now for less if it meant they could have a secure retirement later on. Kind of goes against all those negative stereotypes we're constantly reading and hearing about ourselves, right?

Some of the prevailing Millennial stereotypes include the fact that we're so hedonistic and selfish, we simply don't give a damn about our futures, financially speaking. Or, that we're unable to stack up savings like previous generations because we simply don't work hard enough. However, the reality is that global economic conditions have landed us with a higher cost of living, lower wages, and higher student loan repayments than our parents, or their parents before them. All of this not only makes it hard to maintain a reasonable standard of living, but moreover, it basically renders it impossible for us to save up for our future. And this years' Global Benefits Attitudes Survey seems to suggest that given the choice, most Millennials would actually quite like to create some sort of safety net for when they're older instead of having a few extra comforts in the present.

Faced with increasingly gloomy financial prospect, six in 10 Millennials say they would sacrifice their current pay for a better retirement package in the future, reports global advisory, broking, and solutions company Wills Tower Watson. And apparently, this number has increased as times have got increasingly hard; in 2009, 42 percent of us wanted to pay a higher amount for a guaranteed retirement benefit, but this year that figure has risen to 59 percent.

Speaking on the findings, Shane Bartling, a senior consultant for Wills Tower Watson, said in a press release, “Millennials, because of their financial situation, are concerned over how to help make ends meet. But Millennials also recognize they have long-term financial risks as well, and many agree with having their employer play an active role in encouraging them to better manage their finances." Continued Bartling, "For employers, this is a good opportunity to help their employees make smart financial decisions at pivotal moments through the use of unbiased and personalized budgeting and projection tools.”

The research also sheds some light on how concerned this generational cohort is when it comes to medical care and other benefits. When quizzed about how they would spend an additional benefits allowance from their employers, 27 percent said they would sacrifice more than half of it for health care and retirement plans. If given the choice, however, almost half of Millennials (48 percent) would simply opt for a greater take-home salary or bonus above all else. When compared to Baby Boomers, Millennials are also more flexible about their working patterns: 32 percent wanted more paid time off, greater opportunities for flexi-work and career progression, and access to more benefits as a top priority. In contrast, less than half this amount of Baby Boomers were interested in these benefits.

The survey has certainly helped disassemble common stereotypes that Millennials aren't interested in saving for their future, although it has yet to be seen if the majority of us will actually be able to do so. Or, what changes (if any) our employers or the government will make to ensure we receive the same economic opportunities as previous groups. This research also suggests that many of us are acutely aware of the financial difficulties we face, and given the opportunity, we would like to play it pretty safe with our money instead of spending it all now — contrary to what many common misconceptions about us might suggest. One thing's for certain, however: With the majority of us having only $1,000 in savings to our name and so many of us taking up second jobs and "side hustles" to make ends meet, something most definitely has to change soon.