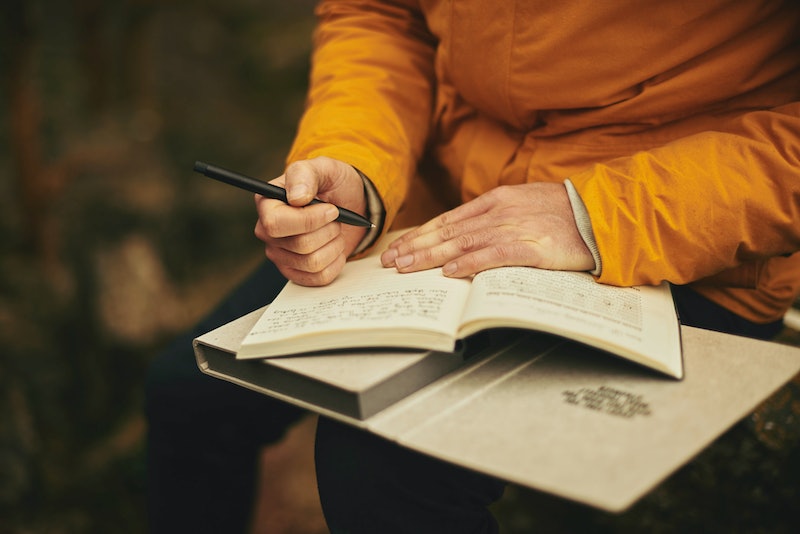 Whether you're an aspiring writer or you just want to take up a journaling habit, what Elena Ferrante says about writing anonymously will inspire you to write for yourself and no one else. The true identity of the Neapolitan Novels author has been the subject of much speculation for years, with competing theories as to who Ferrante might really be. But the Italian author has stayed mum; if she is Marcella Marmo, Maria Mercogliano, Ann Goldstein, or Anita Raja, she isn't coming forward.

For years, we've all been asking one another if we'd really, truly do great things knowing that we would never receive recognition for them. Ferrante has done just that. In 1991, she laid out her philosophy of anonymity in a letter to her publisher:

I do not intend to do anything for Troubling Love, anything that might involve the public engagement of me personally. I’ve already done enough for this long story: I wrote it. If the book is worth anything, that should be sufficient. I won’t participate in discussions and conferences, if I’m invited. I won’t go and accept prizes, if any are awarded to me. I will never promote the book, especially on television, not in Italy or, as the case may be, abroad. I will be interviewed only in writing, but I would prefer to limit even that to the indispensable minimum.

To many readers, Ferrante's identity isn't important. They know their favorite author appreciates their patronage, but they also know that she would survive, happily, without it. By detaching her day-to-day identity from her writing, Ferrante has created a rare opportunity for a writer: the chance to write freely, and without criticism.

That's something every aspiring writer needs to be able to do. Too many writers get caught up on making a perfect first draft, when all the first draft has to do is show up, in its underwear if it wants. No one will see it, and so the author cannot be embarrassed by its uncouth nature.

So I challenge you. Read what Elena Ferrante has to say about writing anonymously, and apply her philosophy to your own work. Here are 11 great quotes to get you started.

1. "Elena Ferrante is the author of several novels. There is nothing mysterious about her, given how she manifests herself — perhaps even too much — in her own writing, the place where her creative life transpires in absolute fullness. What I mean is that the author is the sum of the expressive strategies that shape an invented world, a concrete world that is populated with people and events. The rest is ordinary private life."

2. "I prefer to think of myself as being inside a tangled knot; tangled knots fascinate me. It’s necessary to recount the tangle of existence, both as it concerns individual lives and the life of generations. Searching to unravel things is useful, but literature is made out of tangles."

4. "That name helped me believe fully in the story that I was writing, especially its contradictions and inconsistencies. I wanted to be Elena, the author, and Elena, the narrator. In this way I tried to keep all of my experience on the page and I confronted the most risky point, that is when the most intimate, most personal part of the story becomes a springboard for the imagination and at every step can be overwhelmed by invention and lose every truth."

5. "The wish to remove oneself from all forms of social pressure or obligation. Not to feel tied down to what could become one’s public image. To concentrate exclusively and with complete freedom on writing and its strategies."

6. "I deliberate a lot over what I would like to do with writing. I have always read a great deal in order to borrow what I need from tradition. But then, when I start working I just write, without worrying if something seems too trivial or refined, comfortable or uncomfortable, obedient or rebellious. The problem is one and only one: to tell a story in the most effective way."

7. "Using the name Elena helped only to reinforce the truth of the story I was telling. Even those who write need that 'willing suspension of disbelief', as Coleridge called it. The fictional treatment of biographical material — a treatment that for me is essential — is full of traps. Saying 'Elena' has helped to tie myself down to the truth."

8. "Physical absence from the public sphere makes the writing absolutely central. In the writing itself — be it a book or this interview — which one organises and structures, the presence of the author becomes coherent. The rest is uninteresting private life."

9. "I simply decided once and for all, over 20 years ago, to liberate myself from the anxiety of notoriety and the urge to be a part of that circle of successful people, those who believe they have won who-knows-what. This was an important step for me. Today I feel, thanks to this decision, that I have gained a space of my own, a space that is free, where I feel active and present. To relinquish it would be very painful."

10. "No, my work stops at publication. If the books don’t contain in themselves their reasons for being — questions and answers — it means I was wrong to have them published. At most, I may write when I am disturbed by something. I have recently discovered the pleasure of finding written answers to written questions such as yours. Twenty years ago, it was more difficult for me; I’d try but eventually give up. Now I see it as a useful opportunity: your questions help me to reflect."

— from an interview with The Guardian, Feb. 19, 2016, in response to the question, "Do you ever feel that your anonymity limits your ability to shape the debate inspired by the books?"

11. "More than 20 years ago I felt the burden of exposing myself in public. I wanted to detach myself from the finished story. I wanted the books to assert themselves without my patronage. This choice created a small polemic in the media, whose logic is aimed at inventing protagonists while ignoring the quality of the work, so that it seems natural that bad or mediocre books by someone who has a reputation in the media deserve more attention than books that might be of higher quality but were written by someone who is no one. But today, what counts most for me is to preserve a creative space that seems full of possibilities, including technical ones. The structural absence of the author affects the writing in a way that I’d like to continue to explore."