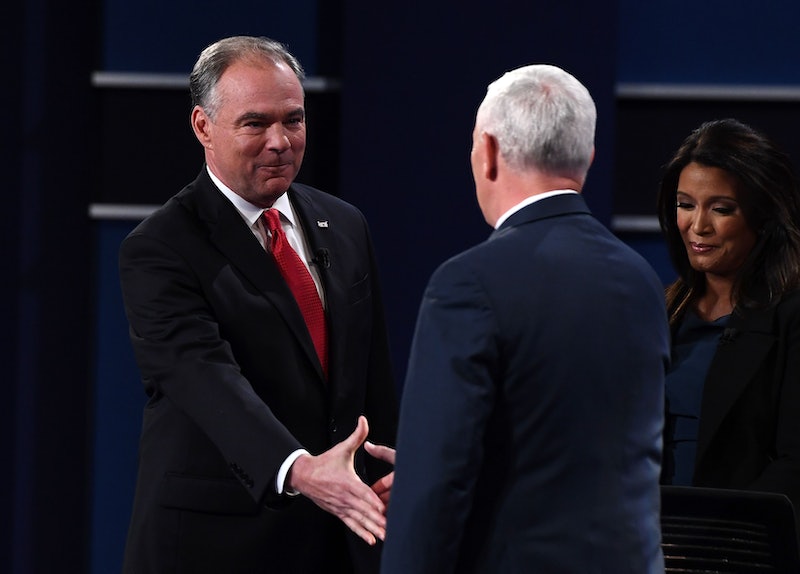 Well, that didn't take long. Not even 15 minutes into the Vice Presidential debate, barbs were being thrown left and right as VP nominees Mike Pence and Tim Kaine talked over each other to defend their respective presidential candidates — and it was only a matter of time before Tim Kaine called Mike Pence "Donald Trump's apprentice." Guys, remember when Trump was merely inflicting fear in the hearts of reality TV star wannabe business moguls with nary an eye trained toward the White House? Those are throwback days indeed.

Kaine's zinger in question came as Gov. Pence of Indiana waxed poetic about Trump's trustworthiness when asked why he thinks many Americans find Trump to be "simply too erratic" to be president. "Donald Trump has built a business through hard times and through good times," Pence said. But, as Pence later began to list what he perceives to be Trump's many merits, the timing was right for Kaine to chime in: "You are Donald Trump's apprentice." I know, I know. Part of you wants to groan, and part of you wants to clap your hands at Kaine's efforts, even if they do come off as a little dad joke-y. At any rate, his comment certainly set the tone for more digs to come.

Kaine's Apprentice jokes didn't stop there either, by the way. Only minutes later, Kaine was back at it again with references to Trump's reality TV days, asking us all to consider "Do you want a you're hired president in Hillary Clinton or a you're fired president in Donald Trump? I think that's not such a hard choice."

It's obvious Kaine knows a thing or two about delivery — that little eyebrow-raising smirk he gave while throwing that last comment Pence's way is not to be missed (nor are any of Kaine's eyebrow moments during the VP debate, for that matter). If only the debate's winner was determined by who was able to make the American people collectively roll their eyes the most while trying to hold in their chuckles. Kaine would definitely have this one in the bag.