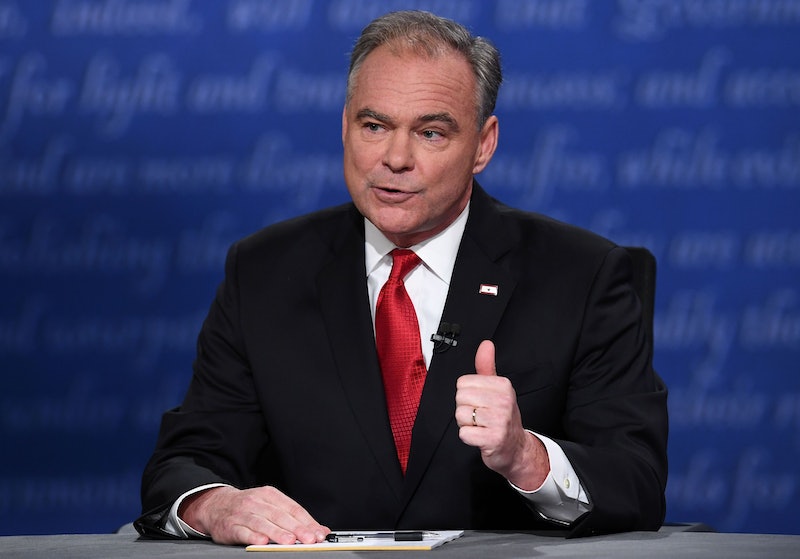 Adding to America's collective confusion over whether their dad is their real dad or whether it was actually Tim Kaine all along, Democratic vice presidential candidate Kaine used two lines from The Apprentice during the vice presidential debate Oct. 4 and basically reached peak dad joke in the first 20 minutes of this live televised event. Seriously, y'all, this debate is so much relaxed compared to the first presidential debate that Kaine is even making his own memes for us!

It's been the internet's collective understanding since Democratic presidential nominee Hillary Clinton tapped Kaine as her VP that his general demeanor is Dad AF. But it was the two remarks harking back to Donald Trump's reality television show The Apprentice, a reality TV show that judges the business skills of groups of contestants and sometimes celebrities from season to season, that truly cemented his role. In the first exchange, he said to Republican vice presidential candidate Mike Pence, "You are Donald Trump's apprentice." (ZING.) And it didn't stop there. A few short minutes later, Kaine brought the burn right back during discussions of job growth, adding, "Do you want a "you're hired" President in Hillary Clinton, or do you want a "you're fired" president in Donald Trump?"

Predictably, the internet's reactions are mixed.

The satisfaction of these dad jokes is made all the more rich knowing that Kaine is fully aware of them, and even told Stephen Colbert he's fine with it. But everyone's opinions on Kaine's dad jokes during this debate aside, on one thing we can all agree: like his running mate Clinton, Kaine definitely came prepared.