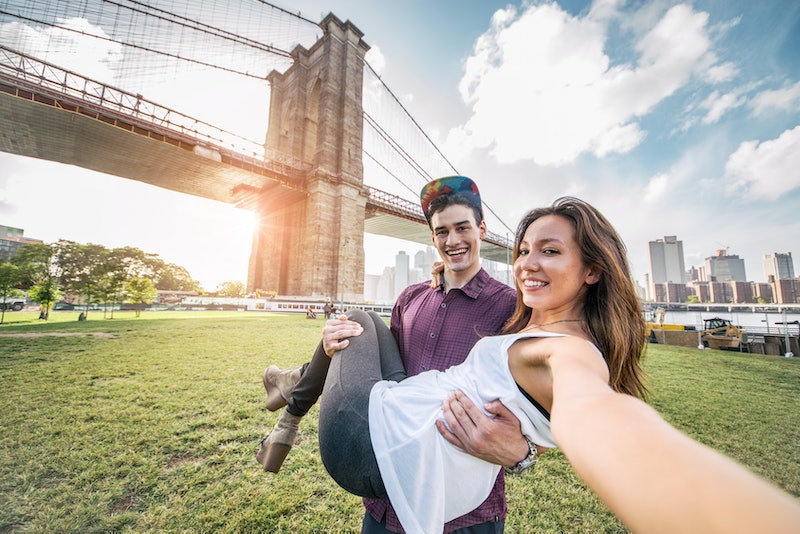 It's no secret, Millennials have a very strong case of wanderlust. As an avid traveler, I can attest to the fact that there’s nothing quite like jetting off to a foreign land. The world changes you, for the better, and when you experience something outside your comfort zone, you feel alive, truly alive, and it’s something that stays with you forever. But that’s when you travel alone. When you travel with your partner, it’s an entirely different game; a game that is sometimes less romantic and more aggravating.

Travel comparison tool Liligo.com teamed up with YouGov and announced findings from its Travel Trends Report, regarding traveling and relationships. What it found, among other things, is that traveling with a partner can create stress and drama even before you get on the plane. Although a week away in the Swiss Alps, sipping hot toddies, and cuddling by the fire may sound like the ultimate romantic holiday, just the process of planning the trip is enough to drive a couple insane or, at the very least, almost insane. This is most definitely the case if the partners aren't on the same page when it comes to traveling. If one person thinks a two-star hotel is “roughing it,” while the other thinks going on a safari in Kenya, without a proper toilet for hundreds of miles in either direction is “roughing it,” then we may have some problems.

Here are seven findings from the Travel Trends Report.

Getting back to that whole difference in how one travels, 23 percent of Americans will totally throw the towel in on a relationship because of their partner’s traveling habits. I guess you better make sure you’re on the same page about traveling even before you start thinking about where you want to go.

2. Millennials Are Even Less Forgiving When It Comes To Travel Habits

While 23 percent of Americans consider travel habits deal-breakers, 35 percent of Millennials feel that travel habits could totally make or break a relationship. I have to agree with this one wholeheartedly. I once seriously debated getting on a plane and leaving a partner at the airport because he didn’t properly pack his carry-on luggage, so it took him 30 minutes to get through security. Looking back, I totally should have left him.

3. Poor Travel Planning Can Lead To Some Heated Arguments

According to the study, one in 12 couples have gotten into fights over poor travel planning. Since this is the case, it might be wise to plan trips together, so when it does come down to travel mishaps, you both can take some of the blame.

4. More Women Than Men Get Into Travel-Related Arguments

If I want to avoid a travel-related argument I know I either have to travel alone, which I prefer or, if I’m going with a partner, I need to make all the plans. It’s not that I’m control freak, but that I like things done my way — which actually might make me a control freak. That being said, while one in eight women have reported getting into travel-related arguments with their partner, only one in 20 men could say the same.

5. Traveling Abroad Is More Popular Than Ever

As the study found, more Americans traveled internationally in 2015 than in any other year before. The percentage of these international travelers jumped by 7.6 percent between 2014 to 2015. Of course this is great news! But also just opens the door to more travel-related arguments within couples... or maybe the opportunity for some hardcore bonding moments instead. Adventure is great for bringing people closer.

6. Over 20 Percent Of Americans Put Saving For Traveling Above Home Ownership

While generations before were more likely to have five-year-plans that probably consisted of eventually being able to buy a home, that thinking has gone out the window. Instead, 22 percent of Americans save more money for traveling, than they do for buying a home.

Not only are couples passing on buying a home in favor of traveling, but the study also found that one in 12 people will skip out on paying a bill in order to be able to afford a trip. That might sound good in theory, until you realize you’ve ruined your credit with exorbitant late fees and suddenly you’re not going anywhere. Then you’re stuck home arguing with your partner about money, instead of arguing with them about how they took the wrong road and now you’re “stuck” in the middle of Tuscany with only one bottle of Chianti between you. The horror!