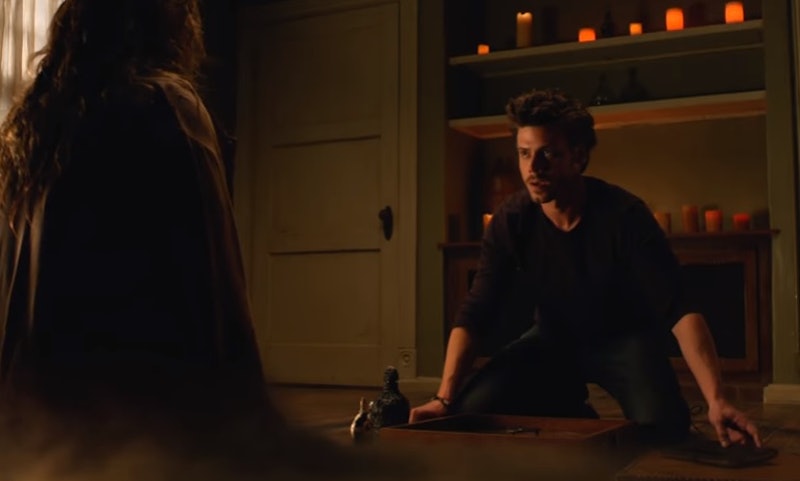 If you're missing Bon Temps, then the next stop on your TV journey should definitlely be NBC's upcoming series Midnight, Texas . Like True Blood, Midnight, Texas is based on a series of books written by Charlaine Harris, and all the action takes place in a small town inhabited by vampires, angels, werewolves, and psychics. That is where the similarities between Midnight, Texas and True Blood end, though.

NBC released a first look trailer introducing the world to the town of Midnight, and despite being home to quite a few supernatural residents, Midnight, Texas is prepared to stand on its own. The show is set to follow psychic Manfred Bernardo as he forms a found family with the rest of the supernatural types who see Midnight as a haven for all things weird. The premise is miles away from small town girl discovers an attraction to vampires when one ends up at the bar where she works. Where Sookie was looking for love and excitement, Manfred seems like he'll be looking for a place where he belongs.

True Blood was known for its wild sex scenes and graphic violence, but Midnight, Texas is a network show. As a result, it will have to find tamer ways to tell its stories. Being on NBC means the show cannot indulge in some of the more risqué behavior of True Blood, but that should not stop it from being a sexy, scary ride.

2. There Is A Case Of The Week Element

Manfred uses his psychic talents to make money, and you can expect to see him getting in touch with the dead on a weekly basis to solve crimes and help those with unfinished business.

3. Manfred Knows He Is Part Of The Supernatural World

It took Sookie several seasons to realize she was not as much of an outsider in the world of shapeshifters and vampires as she thought. Right at the start of the story, Manfred is well aware of his gift for talking to the dead.

4. Midnight, Texas Is About Finding A Place To Belong

Whereas Sookie, Eric, Bill, and the rest of the residents of Bon Temps were constantly engaging in love affairs and feuds, the residents of Midnight depend on each other for support and survival. It seems like they are going to be a family first, which means things like romance and territory disputes won't make up the bulk of the story.

5. Midnight, Texas Has A Lot In Common With Twin Peaks

A man comes to a small town where a young woman has recently been murdered and discovers everyone has a secret? Midnight, Texas is basically Twin Peaks with vampires.

6. Ghosts Are Way More Prevalent Than Anything Else...

Ghosts are the main attraction here. While vampires, angels, and werewolves all have their place in the story, it is Manfred's ability to talk with the dead that will drive the main story. In other words, if you are looking for another sexy vampire show, this is not it, but there if you are interested in a sexy psychic show, you should definitely tune in.

The one vampire character who does reside in Midnight has steely blue eyes and some sort of special energy sapping ability. Whatever the mythology is, it feels different from the one True Blood established.

8. The Sookie Character Is On The Sidelines

Parenthood's Sarah Ramos stars as Creek, the small town waitress who wants to figure out all the strangeness in her town. While Creek sounds very Sookie-ish, she is not the main draw here. Where True Blood told a supernatural story from the perspective of a (mostly) normal outsider, Midnight, Texas is all about showing you what the world is like from the point of view of the "monsters."

Midnight, Texas may not be the next True Blood, but the show clearly has its own charms.