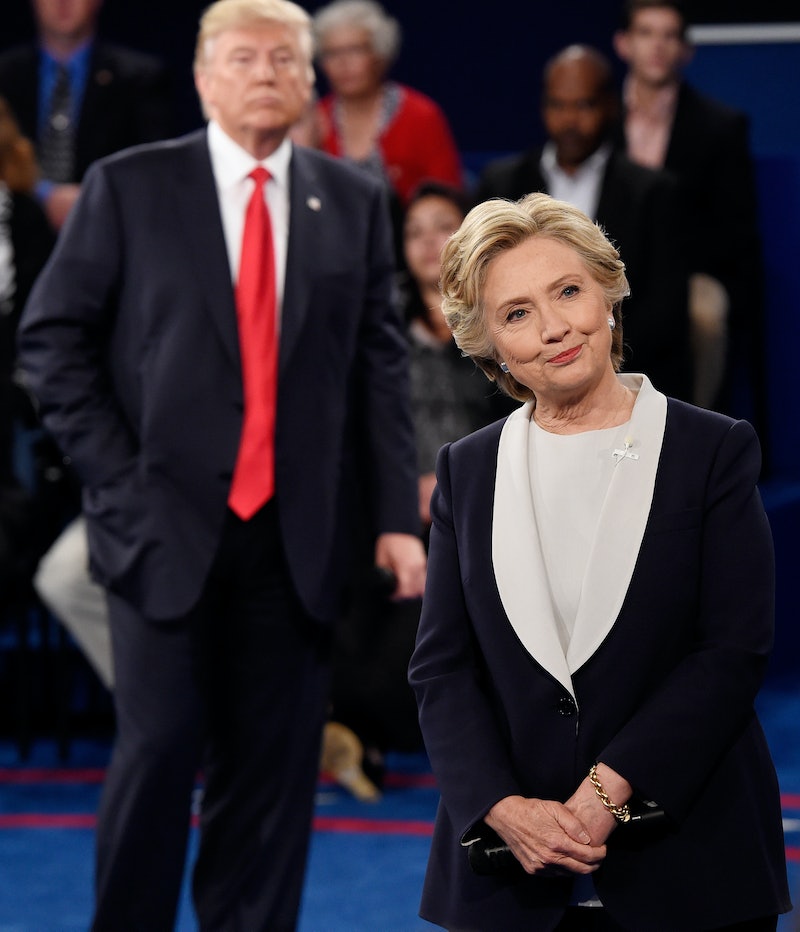 The second presidential debate on Sunday night brought a slew of unexpected surprises, from Karl Becker's question about what Donald Trump and Hillary Clinton liked about each other to the two candidates' complete lack of handshake at the beginning. What wasn't a surprise, however, was that when a fly landed on Hillary Clinton, she handled it like a boss. And while this incident may seem pretty trivial, it's actually a perfect metaphor for the composure and grace that Clinton has shown throughout the entire presidential election.

In case you weren't watching the debate last night (understandable, given what an... experience it was), let me catch you up. In the middle of the whole thing, while Clinton was pointing out Trump's tendency to avoid answering people's questions and say inaccurate things, an obnoxiously large fly decided to swoop down and plant itself right onto her left eyebrow. As Stephanie Tanner from Full House would say, "How rude!"

And yet, even as this pesky insect was getting all up in her personal space, Clinton stayed focused on the matter at hand and didn't flinch one bit. In all honesty, if that were me, I would've been flailing both arms in front of my face, shouting, "Die! Die!"... but then again, I'm not running for President of the United States.

Here, take a look for yourself (but blink and you'll miss it — it's fast. Pay attention around the five-second mark):

Footage of those few seconds has been buzzing all over social media — and although there are, of course, a number of tweets and posts trying to paint it as a negative moment, it's actually anything but. Think of that fly as all the mud that's been slung at Clinton throughout the course of this entire election cycle — from Trump, yes, but also from a wide variety of other sources — and think of her unflappable response as her ability to stay focused on what matters most (the issues). See what I'm getting at? It's beyond impressive.

Let's start with how Clinton managed to take all of the insults Trump has made about women, people of color, people with disabilities, veterans, and basically every other marginalized community you can think of and turned them into serious conversations about the current policies and attitudes that we really need to change. Even as Trump continues to attack her verbally and talk over her during the debates (much like the way that fly abruptly propped itself where it wasn't wanted), Clinton never interrupts him, insults him back or swats him like a fly even if he deserves it. If we're talking about presidential temperament... well, that's it right there.

In the last few months, Trump has made even bolder, more offensive statements — but karma is catching up with him now. When the tape from 2005 leaked on Friday featuring Trump bragging about behavior that amounts to sexual assault, his statement in response was a non-apology and an excuse. (No, Mr. Trump, it's not just "locker room banter." It's rape culture.) By contrast, Clinton has apologized time and again for using a private email server to send work emails. She owns up to her mistakes. And although she's not perfect, owning up to your mistakes is the mark of a good president. And during the second debate, Donald Trump insinuated that Clinton would be in jail if it were up to him, she didn't sneer back; instead, she only rolled her eyes silently as if to say what we were all thinking: "Did you seriously just say that?"

What's more, every single time Donald Trump insists that she did nothing as First Lady, Secretary of State or U.S. Senator, Clinton has no problem highlighting all of her accomplishments, from writing and passing an act that made drug and medicine dosages safer for kids to helping to secure $21 billion in federal aid for New York in the aftermath of 9/11. (And that's not to mention that time when, after the media blasted out hyperbolic statements about her health when Clinton was diagnosed with pneumonia, she didn't become overly defensive.) She's been there for America this entire time and she has this nation's best interests at heart — even with veritable armies of flies buzzing around her the entire time.

So the next time you spot a fly on your shoulder or your shower curtain or some other place where it's unwanted, just remember how Clinton deals with annoying flies that come her way: With respect and poise, but without giving them any incentive to keep bugging you. Like, dare I say, a president truly would.