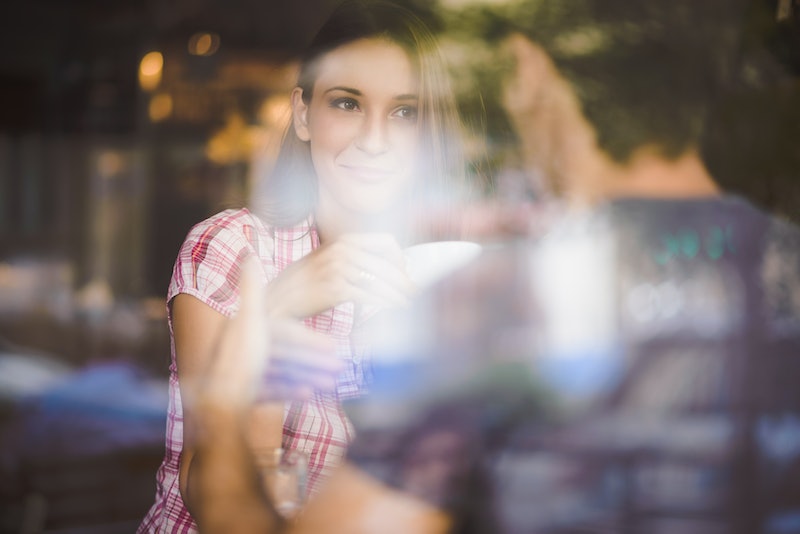 Honestly? Dating sucks. It is stressful. It is awkward. It leads to me trying to sit upright and also relaxed in Spanx and a weird bra while doing sexy nibbling of salad foods and laughing gamely at stories involving strangers. But there are definitely, absolutely things women don't have to apologize for on dates. Things that we continually feel pressured to apologize for. Things that we internalize until our insides are ridden with potholes of guilt and feelings of inadequacy. Things that it's high time our culture stopped telling us are things that we should feel sorry about.

Though I know this has been said of every generation, I feel like Millennials are revising what it means to "date." Dating apps, casual hookups — any sort of advice our parents have doled out applies only to a point. What has carried over despite the changes, though, are anxieties about being an "appropriate date." But I just want to remind you that an apology is a post-mistake action. So much of what we apologize for is not because we've done anything wrong, but because we're trying to accommodate another person at the cost of our own well-being. Because that's what women are socialized to do. Sexism is incredibly insidious.

That's not to say that if you are a woman on a date you can do literally anything, without accountability. Being late is a thing you should apologize for. Being rude is a thing you should apologize for. Sneezing on your partner's food, getting wasted and rowdy in a chill-ass setting, running away mid-meal — all things I generally wouldn't suggest doing (unless the running away thing was because you literally feared for your safety, because in that case, RUN). But eating like a real hungry person? Not something for which you should say sorry! And the same goes for all these other things, too.

By which I mean, number of previous partners. This topic always comes up at some point. And when it does, people end up apologizing for both a lack or an "excess" of partners. But your "goodness" as a person is not dictated by the number of people you've been intimate with, and you do not need to apologize for your choices about your own body.

If you look in the mirror and you feel good, then that's it. Like, that's the end of this conversation. Heck, it's even over if you don't do that whole looking into a mirror thing, because you do not owe it to anyone to make yourself into something pleasing for them to look upon.

Some women are good at chit chat! Some women are not! All women tend to be held to a much higher social standard than humans raised as men! Because emotional labor is gendered! Which is deeply unfair! So screw it! You're allowed to talk a lot!

And you're allowed to be quiet!

What We Eat, How Much Of It We Eat, And Anything Else Pertaining To Our Food Choices

In addition to worrying about dressing as an appropriate date should and speaking as much (or as little) as an "appropriate date" should, we have to worry about eating enough that we seem like the "cool girl who can hang" but not so much that it's "gross." And we have to pick the "right" options, too. And all of that is BS.

Wanting To Split The Bill

If it makes you more comfortable to split the bill, then suggest splitting the bill. Be nice, because men tend to be socialized to view that as emasculating, and working through weird, internalized social norms can be tough. But still: If it's your preference, suggest it.

Wanting To Continue The Date

Take control of your relationships, friends. If you wanna see the human again, say so. Weird games where people compete to demonstrate who cares less and who is less invested are exhausting. And toxic. It's possible the other person might say no, but that's OK, too. Asking for what you want is not a thing you have to feel guilty about.

Not every date is going to be amazing or even like, tolerable. You don't owe a person more dates if you're not into it.