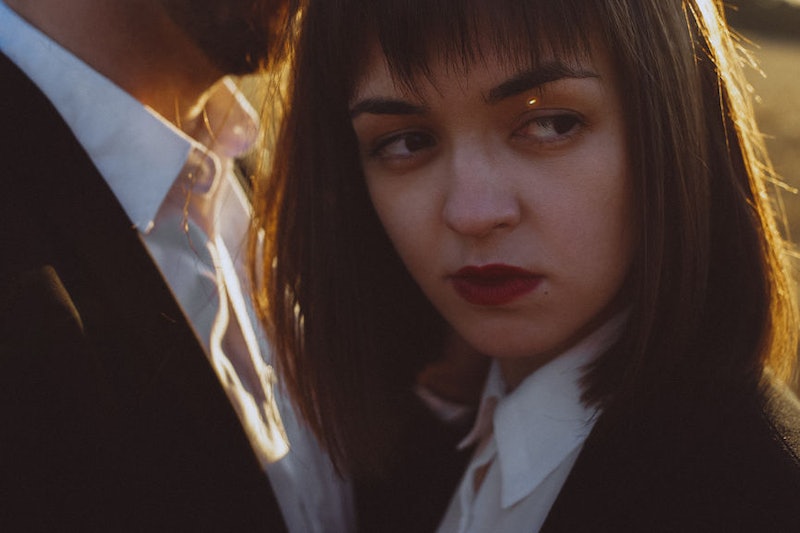 Women and gender minorities certainly face a lot of sexism at the hands of other people, but other times, it can come from within ourselves. This doesn't mean we are to blame for societal misogyny, but it does mean we've internalized it. The ways internalized misogyny sneaks into our relationships provide one example of how sexism affects the most seemingly private areas of our lives.

If you are a woman or LGBTQ person, it's pretty impossible not to feel any of this. So, even if you haven't realized it, here are some ways internalized misogyny may have affected your own relationships.

1. Fear Of Making The First Move

Women and other feminine-presenting people are often taught that they should play "coy" or "hard to get" — something for which we can largely thank rape culture. It's a messed up society that considers lack of interest to be sexy. Straight women might feel this especially because of the idea that men like the "thrill of the chase" — even though women who make the first move tend to have more success than men, according to OKCupid's data. There's no other scenario where acting interested is viewed as a disadvantage. You wouldn't, for example, decide not to see a doctor because they answered the phone when you called their office. The idea that showing interest is unattractive not only encourages rapey ideas but also disempowers women by leaving them waiting for someone else's call or text rather than pursuing what they want.

2. Taking On All The Emotional Labor

Emotional labor, according to Everyday Feminism , is "the feminist idea that women — and other people that society labels 'feminine' — are socialized to provide a vast array of emotional services for other people (usually men), most often without acknowledgement or pay." At work, this can mean mediating conflicts with coworkers even when you're not working in HR. In relationships, this can mean lending more emotional support than you're giving, being the only one to take stock of how the relationship's going and what issues you're dealing with, and being treated as an endless fountain of advice. If your relationship is making you feel emotionally drained and you feel guilty about the prospect of not draining yourself, this could be internalized misogyny at work.

3. Feeling Like You Need To Look A Certain Way To Be Attractive

One way internalized misogyny shows up in all areas of our lives is in the focus placed on our looks. In relationships, this often means that women and other feminine-presenting people feel the need to wear makeup, do their hair, shave, and make other appearance-related efforts to please their partners. "Primping" before dates is a well-known ritual among women. Some people do these things because they like to, so it's not necessarily a case of internalized misogyny, but the problem is that some people are made to feel anxious if they don't. While this varies from culture to culture, it's less common for men in the U.S. at the very least. According to a Today.com survey, American women spend two more hours per week working on their appearances than men.

Because women are taught that their sexuality exists to please other people and that they're "slutty" if they're openly sexual, many feminine-presenting people find themselves timid about asking for what they want in the bedroom. This can show up in any type of relationship, but studies show there's actually a greater gap in sexual pleasure in heterosexual relationships. A study in the Journal of Sexual Medicine found that heterosexual women orgasm in about 61.5 percent of their sexual interactions where straight men do 85.5 percent of the time. This reflects the presumption that men's enjoyment is more important, and often, women internalize this idea.

Women are taught to make their relationships their number-one priority, especially if they have kids, which can lead some women to feel guilty for prioritizing work over their relationships. We shouldn't feel pressure to "lean in" and "have it all," but we also shouldn't feel the need to sacrifice our work lives for our love lives. We often exert this pressure on ourselves, but it starts with the media and the people around us. Internalized misogyny is hard to unlearn, but being aware of it — without judgement or blame — is the first step.