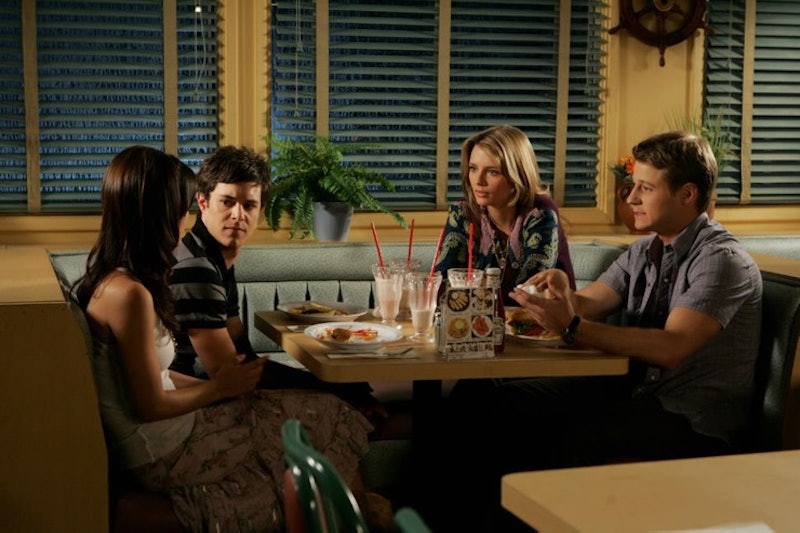 When thinking of early 2000s #SquadGoals, you don’t have to look any further than The O.C.: It’s Seth Cohen, Summer Roberts, Ryan Atwood, and Marissa Cooper until the end. These four friends do a lot of emotional lifting over the course of the show, and sometimes fans have to be reminded that they’re a bunch of fun-loving teens with genuine affection for each other. Subsequently, there’s a special place in my heart for all of the episodes that focus on The O.C. ’s core four as a unit.

You already know all about Ryan and Seth’s unbreakable bromance. You probably wish you had a bestie as loyal as Summer. And hey, you’ve definitely found relationship goals in at least brief moments between the show's two main couples (although for Ryan/Marissa, it tended to skew toward “painfully dramatic”). But it’s the moments in which they function as the fab four that I really miss. Filling that void with Taylor Townsend and Kaitlin Cooper in the final season was a nice effort, but you can’t replicate that original bond.

As such, here are most of the O.C. moments that best showcase the squad strength of the core four, and only some of the moments that three of them had to save Marissa’s butt. (That happened a lot.)

1. When Ryan, Marissa, & Seth Bond While Trying To Figure Out A Way For Ryan To Stay In Newport Beach

Before they could become the core four, they started with two and three. Ryan's arrival gave Seth his first real friend and, furthermore, it built a bridge between him and his longtime neighbor, Marissa. As they're plotting ways to hide Ryan from foster care, (adorable) Marissa asks why Seth is being so snippy. What did she ever do to him anyway? "Nothing, Marissa," Seth says. "I've lived next door to you forever, and you've never done or said anything to me." Marissa is quick to point out that Seth thinks he's better than everyone. The jokes are building, and the foundation is being laid out.

2. When Ryan, Summer, & Seth Go On The Hunt For Marissa In Tijuana

The fact that everyone even commits to this trip in the first place — Summer is still very "ew" about Seth and his taste in music — is pretty remarkable. But when Marissa goes AWOL, the remaining trio goes into crisis mode with Summer first trailing her back to the hotel room. And then she, Seth, and Ryan track Marissa down after Marissa bails with a pocketful of painkillers.

3. When Ryan, Summer, & Seth Try To Bail Marissa Out Of The Hospital

It's an impressively intricate plan (more so than the model home idea) that involves candy striper uniforms. What's not to like?

4. When Those Crazy Kids Go To See Rooney Together, Despite All The Burgeoning Uncomfortable Feels

Oliver invites them as a power play, which already amps up Ryan's discomfort level. But that's only the start of it: Seth is dating Anna, Summer is cramping their romance, and also ... Luke is there for some reason? The night is not without complications, but mad respect for everyone for committing to this event.

5. When The Gang Determines Their Friendship Dynamic After Winding Down From Their L.A. Adventure

Seth is the brains, Ryan is the brawn, Marissa is the beauty, and Summer? Summer settles on being the boobs, although Seth also proposed "the b*tch," and I personally don't see that as a bad thing.

Seth is so proud of his ability to hit a nail and makes jokes about Summer being a stud finder, while Summer shows she can really go full HGTV on this living space. It's beautiful to watch.

7. And Then Everyone Is Just Cuddling On The Bed & You’re Just Waiting For These Ties To Be Shattered

8. When They Band Together To Make Chrismukkah Special For Lindsay

I mean, OK, who actually even cares about Lindsay? That chick almost got the holiday canceled because of that whole being-Caleb's-biological-daughter thing. Whatever. The point is that Chrismukkah was almost ruined, but Summer saved it. Then the entire fam pulled it together and decorated her house. A Chrismukkah miracle.

9. When A Distressed Marissa Shows Up At The Cohens' Place With The Warm, Delicious Comfort Of Fresh Bagels

It was after this delightful public meltdown, and everyone follows suit. Because what else pairs better with bagels than the soothing, familial glow of the Cohens?

10. When The Foursome Gets Trapped In A Mall & Makes The Most Of It

There's a bit of hockey, a bit of fake camping, and a lot of working through the residual relationship issues of the two couples (or one current and one former couple, rather). Seth sums up all of our glee, quipping, "Ah, look at that, my little Summer. It seems like the fantastic four is becoming fantastic again." Again, give it time before this all falls apart.

11. When We Have A Precious Beach Montage Of The Forever Friends Having Fun

It's like the epitome of end-of-summertime fun, with no shortage of making out and roasting marshmallows.

12. When The Team Rallies To Get Marissa Back At The Harbor School

The fact that they enlist future replacement member and former enemy Taylor Townsend to place power behind the campaign is nothing short of masterful. Really, though, the bulk of credit should go to Summer for orchestrating everything in the quest to get Marissa in their Class of '06 picture.

13. When They Graduate & Bask In The Promise Of Tomorrow

Sometimes it's just better to cut off the episode with those joyful digital camera shots and pretend like the core four never went back to three.

If you need me, I'll be sobbing into a tissue over all that once was and never will be again. The O.C. does that to me sometimes.

More like this
'Friends' Creator Marta Kauffman Opened Up About Misgendering A Guest Character
By Grace Wehniainen
Jesse Tyler Ferguson Had A Funny Run-In With A Fellow ‘Modern Family’ Alum
By Grace Wehniainen
“The Door Is Always Open” For Another 'Breaking Bad' Spin-Off, Says AMC Boss
By El Hunt
The 'Stranger Things' Writers Revealed 2 Tragic Unscripted Finale Moments
By Grace Wehniainen
Get Even More From Bustle — Sign Up For The Newsletter