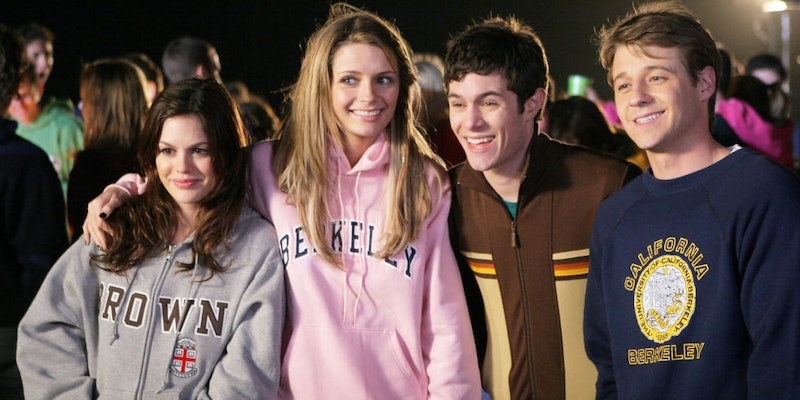 When I was 10 years old, I watched The O.C. for the first time — and after about five minutes of the intense dialogue, the piano theme rolling in, and the title, The O.C. appearing across the landscape of our 34" television set — I was hooked. I didn't know it at the time, but the show I was watching became a cult classic that truly defined my generation, mainstream culture, and mainly my life.

Whether you wanted to admit it or not, you were hooked too. We all tuned in every week after week when it was on the air — hey, many of us still tune in now — to watch the series, because believe it or not, this show set in the coastal community of Newport Beach, Calif. was the life most of us dreamed we could have. We all wanted to be a part of the core four, because hell, they were the CORE FOUR. Ryan Atwood's wrong side of the tracks persona, Seth Cohen's meta humor, Marissa Cooper's endless drama, and Summer Roberts' brilliant comebacks — it was all perfect. Though this inescapable show had all the expected elements of a teen soap opera, its rich, relatable issues and seductive, sharp writing is what struck a lasting chord with me and so many fans, helping it remain a forever-favorite in the hearts of many.

Twelve years on from that first moment public defender Sandy Cohen gave his number to a leather jacket-clad Ryan, I thought it was only right to pay homage and reflect on the cultural influence of our all-time faves by showing you the best episodes to watch for each of your favorite The O.C. characters.

But be warned — this list may invoke major feels, a strange urge to listen to Death Cab For Cutie while reading comic books, and tons of desire to begin marathoning the show again. You're welcome.

To me, the final season of The O.C. was the peak of its hyper self-awareness — especially the season premiere. In the wake of the death of (OBVIOUS SPOILER ALERT — but seriously, everyone, even non-fans, know about this plot line) Marissa, Ryan was dealing with the loss of his first real love and scrambling to find all the pieces of his life again. It is the most vulnerable and gut-wrenching situation that we see our lead hero involved in because, well, Ryan abandons ship. He leaves his security blanket of the Cohen household then takes up a bartending job at a grungy pub and participate in some weird fight club — but, plot twist, our hero chooses not to fight back. It is the only way he can emotionally cope with the pain of losing Marissa, through physical pain. It is a huge realization, and one that had me in tears. (Not to mention, it included the epic, ominous Placebo song, "Running Up That Hill.")

Marissa Cooper was pretty much your stereotypical rich teenage girl. She was blonde, she was pretty, she got (almost) everything she wanted and she had problems up the wazoo. She wasn't the most expressive, but she was part of the angst of The O.C. At the end of Season 2, all of Marissa's troubles come to light and one of the most horrific of all is when Ryan learns that his older brother Trey attempted to rape Marissa while he was in Vegas. Ryan, being the valiant protagonist he is, rushed to confront Trey and defend Marissa's honor, only to almost lose his life. In an effort to do what Ryan has done for her so well, Marissa begs Trey to stop hurting Ryan — but, when he doesn't, Marissa picks up a gun and shoots Trey in the back. This episode showed the lengths both characters would go to for one another, but most importantly, let us see the undying love Marissa had for Ryan throughout the entire series.

There are many episodes in the entire series that were a personal best for Seth Cohen. He was dorky, he was cute, he was understandable, and he had the best one-liners. Though Seth was the antithesis of Ryan, the mere fact that they got along so well had bromance goals written all over it. The prime episode that showcased Seth's supreme geek, his distaste for where he lives, his love for sailing, his humor, his obsession with Summer Roberts, and his true comfort of loneliness was the series premiere, though. With Ryan as the basic catalyst for a Seth's better life in Newport, the endearing qualities of only child Cohen are really at their highest. Seth transforms into the heart of the show and similarities he shared with every loner teen was uncanny. It was the beginning to the end of craving plastic-horse-loving Seth was your boyfriend. We can only dream, my friends.

Summer Roberts was the one person I wish was my best friend IRL on the show. Despite her past life of being sort of like a Regina George-esque figure, Summer evolved into an incredible woman who was constantly there for anyone when they needed her — be it her dad, Marissa, Julie, Kaitlin, Seth, Taylor, or even Atwood. Like Seth, Summer had many episodes featuring epiphanies and highlights, it was "The Cold Turkey" that really displayed her true character. Though Summer leaves before actually being able to help Seth (twice), the true extent of Summer's caring nature was revealed when she realized with Julie that she needed closure on Marissa's death and couldn't go on living like everything was the same anymore. Also, the moment that will give you feels is smack dab in the middle of this episode when Summer says: "I'm not insane. OK? What's insane is how I used to be. When all I used to do was hang out with my best friend, and go tanning with her, and go shopping, and braid her hair, and talk to her on the phone." Trust me, Sum, we missed her too.

Along with Seth, Taylor Townsend was one of the most relatable characters on the series. Though her earliest presence in Newport was mostly to annoy everyone around her, she evolved tremendously in the show's final season. "The Chrismukk-huh?" was imperative in this evolution: It included the pivotal moment that Taylor stood up to her mother, heartless fiend Veronica Townsend. In addition to emerging stronger personally, Taylor also put her feelings aside for Ryan so he could say goodbye to Marissa, one final time — consequently, she materialized into a selfless, badass woman.

After constantly rewatching of this series, I have come to the conclusion that, Sandy Cohen was truly the best character to ever come out of Newport Beach. He was outspoken, headstrong, incredibly brilliant, compassionate, and, of course, enormously protective of his family. One of his most admirable qualities was his ability to love Ryan so unconditionally, despite Ryan not being his son by blood — and the great lengths he always went to to prove it. In the episode "The My Two Dads," Ryan's absentee father, Frank tries to comes back into his life, claiming he has cancer and Sandy's fatherly instincts immediately come out. He goes extreme Inspector Gadget on senior Atwood, and comes to Ryan's rescue yet again. We also got to see this amazing moment of true Sandy security:

Kirsten was an endearing, hopeful, but believably flawed mother. And her alcoholism was one of the most authentic and poignant bouts she faced. In an emotional episode of Kirsten realizing her excessive drinking was a problem, she faced a traumatic event and then hit her issue head-on.

Julie Cooper was never someone who should be named "mother of the year," but her progress throughout the series was wonderful — and it also came to a head in the final season like many of the other characters'. After being shunned from the Cohens' Thanksgiving for sending Ryan on a death mission to kill Volchok, Julie was left alone: No Dr. Roberts, no Kaitlin, and no Marissa. When Julie finally grieved for her deceased daughter, she actually apologized for the first time and meant it. She was welcomed back into the lives of those she loved, and most importantly, she found true peace with the loss of her daughter.

After five years of following Ryan, Marissa, Seth, and Summer through countless plot twists and turns, there are still so many moments to be remembered from The O.C. And even though we know what happens in the end, The O.C. will always have a special place in fans' lives for years to come — that's just how it's done in Orange County.

More like this
'Friends' Creator Marta Kauffman Opened Up About Misgendering A Guest Character
By Grace Wehniainen
Jesse Tyler Ferguson Had A Funny Run-In With A Fellow ‘Modern Family’ Alum
By Grace Wehniainen
“The Door Is Always Open” For Another 'Breaking Bad' Spin-Off, Says AMC Boss
By El Hunt
'The Summer I Turned Pretty' Using “Cruel Summer” Has Twitter Begging Taylor Swift To Release A Music Video
By Radhika Menon
Get Even More From Bustle — Sign Up For The Newsletter