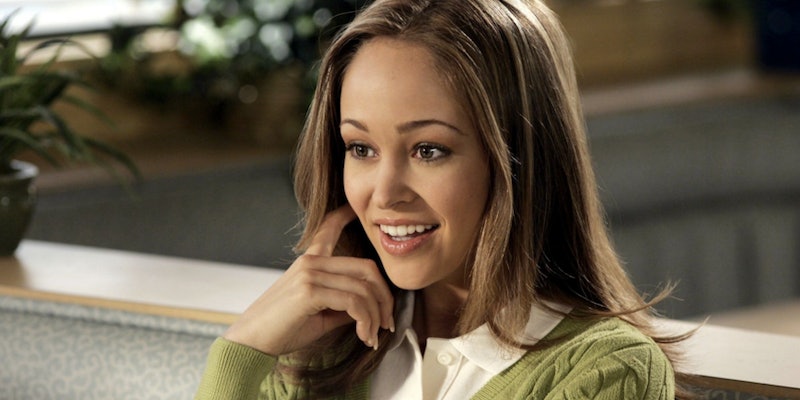 While most The O.C. fans never quite got over Marissa Cooper, I've always held a soft spot for Taylor Townsend. For me, Taylor Townsend and Ryan Atwood were the most perfect O.C. couple, mainly because they were so imperfect. In a total case of opposites attract, the high strung nervous talker Taylor was inextricably drawn to brooding cage fighter Ryan, and love ensued. So it will come as no surprise that I think that Taylor Townsend is the epitome of #LifeGoals. And, obv, I'm absolutely devastated when we didn't get a Season 5 of The O.C.

One of the reasons I loved Taylor so much was that she brought a much-needed lightness to the show. I know, I know, when you rewatch The O.C. the departure of Marissa Cooper, A.K.A. Mischa Barton is the knell that your marathon is soon to be over, but you can't blame that on Autumn Reeser or her adorable character. (After all, Chris Pratt was in Season 4 of The O.C. too and even he couldn't keep the season finale from inching closer. I'm getting sad just thinking about it.) But luckily, one thing we do have, alongside the ability to re-watch all episodes of The O.C. again and again, is reliving those special memories via the medium of quotes. And although you might think her a strange role model, Taylor Townsend quotes was brutally honest and completely awesome. Take a look for yourself.

1. When She Told Seth She Knew Exactly What He Was Thinking

Taylor is never afraid to stand up for herself. She knows she's not popular with everybody, but she won't shy away from confronting anyone who makes her feel unworthy.

2. When Her Respond To Heartbreak Was So On Point

Even in the face of heartbreak, Taylor has a sense of humor. Plus, she takes romantic compatibility seriously enough to know that food is a crucial part of bonding when you're a couple.

3. When She Put It All On The Table

We're all prone to going a bit cray cray when it comes to love, and Taylor is the first to admit this. While most of us have done the odd bit of social media stalking in our time, it takes a brave person to fess up to maybe "researching" their crush a little too much.

4. When She Lobbed This Hilarious Faux-Threat

5. When She Was So Excited, It Hurt

And Taylor's enthusiasm is unrivalled. We should all be more like her, TBH.

6. When She Wasn't Going To Give Up On The Contraception Conversation

Taylor is pro-birth control, and defended condoms flawlessly in a conversation with Summer. She realises the importance of using protection, and that it's worth the minor compromises. Even that weird latex smell.

7. When She Was Adorably Wrong About Ryan's Interest Level

Taylor owns her crazy, and that's what makes her so great. But she, too, fell prey to that all too human emotion of feeling like she didn't fit in... even when the dude was crazy about her.

8. When She Was Too Busy Being Awesome

Taylor has the best excuses when she doesn't want to do something, plus updating your blog is way more productive than washing your hair, right?

9. When She Rolled With The Punches Like A Super Pleasant Boss

Taylor may be too peppy for some people's tastes, but she sure knows how to appreciate life's little moments.

10. When She Was Sexy & Super Confident

Maybe Taylor is a little braggy sometimes, but I love how sex positive she is in the face of haters.

11. When She Got Real With Ryan

In her dating life, Taylor isn't afraid to ask the difficult questions, or point out the things she finds tough in a relationship.

12. When She Knew Exactly What Her Superpower Was

Everyone hates an awkward silence. Taylor's solution to silence is sort of perfect, and should inspire us all to talk more.

13. When She Spoke For Girls Who've Felt Weird At Any Point In Their Young Lives

Great advice for any situation, really.

Self-deprecating, sweet, surprising, annoying, and totally romantic, Taylor Townsend is one of my all-time favorite TV characters. Fingers crossed for a reunion of The O.C. in which we finally get to see future Taylor and future Ryan all loved up.

More like this
Zach Gilford Admits He Forgot Taylor Swift's Name When He Starred In Her Music Video
By Jake Viswanath
Taylor Swift Visited The 'Glee' Set For This Bizarre Season 5 Episode
By Grace Wehniainen
The 12 Most Controversial & Unexpected Grammy Moments Ever
By Jake Viswanath
Jay-Z Is Performing At The Grammys, Meaning Beyoncé Might Actually Show Up
By Jake Viswanath
Get Even More From Bustle — Sign Up For The Newsletter
From hair trends to relationship advice, our daily newsletter has everything you need to sound like a person who’s on TikTok, even if you aren’t.