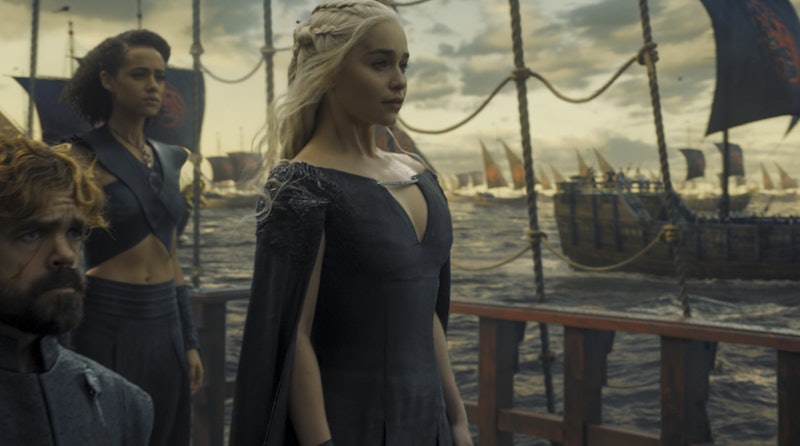 Sometimes, foolish people who don't watch Game of Thrones act like they know what it feels like to be emotionally invested in the popular HBO series. "Oh, yeah, I was totally obsessed with that show Lost. I get it," they will say. But Game of Thrones is not just a show. The series is a lifestyle. Watching Game of Thrones isn't like other shows, because there's way too much other stuff involved. This fantasy series isn't just a story about a mystical, Middle Ages-styled world. Instead, it's a series that comes with a sometimes depressing outlook on the world, well-developed characters, and beautiful aesthetics. Game of Thrones isn't just your average television show. It offers so much more than your average series.Those lovable chumps who compare Game of Thrones to any other, more run-of-the-mill television show should take a second to think, or maybe just give the HBO program a serious watch through. If they do, they will surely realize that the series from creators David Benioff and D.B. Weiss is so much more than any old show. The following are a few examples of how Game of Thrones proves itself to be a lifestyle time and time again.

1. It's A Weekly Event For Which We Modify Our Schedules

Do not ask me if I want out hang out on Sundays when the series picks back up in 2017. I will be busy for about two months. Do not call, text, or come to my door unless it's to talk about how rad that episode just was.

2. It's Given Us A Whole Bunch Of New Catchphrases

Someone asking you to "hold the door" will never be the same again. Nor will the day before winter ("winter is coming"), or any time you tell someone they don't know what they're talking about ("you know nothing").

3. The Story Is Immersive

If you get tired of the show, you can always catch up on the Song of Ice and Fire series, or get lost in a deep dive of fan theories on the internet.

The style of the show, with all those flowing dresses and statement jewelry pieces, can actually be a part of one's day to day. Bustle contributor Marie Southard Ospina actually spent an entire week rocking GoT -inspired clothes and looked beautiful and fierce. Meanwhile, you can buy the dragon necklace modeled after Dany's style and pictured above on Etsy for $56.47. GoT rocks the privilege of being a fashion statement.

5. The Show Presents An Entire World

Like J.R.R Tolkien before him with Lord of the Rings, George R.R Martin has created an entire world with different peoples, languages, cultures, climates, and creatures. It's not just a show; it's an entire reality.

6. Somehow, It's Not Cheesy

It's hard to create a Middle Ages-inspired fantasy world that doesn't include some major cheese. There's something about knights going off on quests and damsels in distress that immediately brings on the cheese factor. But GoT, with its ice cold political moves and brutal killings, isn't a romanticized view of a fantasy world. Even with the addition of some magic here and there, or a magical creature once in a while, the series is a political story at its core. Because of that, and because of the mostly realistic look of the show, it becomes unlike any other we've seen before.

The constant and consistent hounding Kit Harington and the entire cast and crew of Game of Thrones received after Jon Snow was brutally murdered at the end of Season 5 is a testament to how much fans care about their favorite characters. We've seen the worst things happen to our favorites, so now we're obsessed with the idea of something good happening. The attachment and fan love for the characters is mind-boggling.

8. The Show Has Some Truly Wonderful Feminist Moments

Not many shows can boast having a character list full of strong, intelligent, and sometimes scary women, who make sure the show pass the Bechdel test with pretty much every episode. While there is a great deal of violence against women in this show, there have also been instances of women wielding extreme power to get what they want.

9. There Are Some Serious Lessons To Be Learned

GoT teaches all sorts of life lessons. One example is "all men must die," the concept that, regardless of your station in life, you are truly the same as the guy next to you. Another valuable lesson is that everyone has their own perspective and their own experiences, so "bad guys" and "good guys" vary based on who you are. Westeros, Essos, and our real world all have a whole lot of grey areas, and GoT reminds us of that.

Like in life, we have no idea what's going to happen next on GoT. And again, like in life, we can theorize and worry all we want, but chances are we won't be able to guess the real outcome. Even though the HBO series and book series are fictional, the events in them seem just as random as events in real life. So, it's not a series, but a lifestyle.

11. It's A Great Talking Point

When you're stuck in a situation with someone you have little in common with, thus have very little to talk about, it can be difficult. But even if they aren't a fan of GoT, there's still always a discussion of some kind to be had about the series. If they do watch it, even better. How many awkward or boring situations has GoT saved you from?

Next time someone tries to belittle Game of Thrones in your presence as if it's a show like any other, be sure to make them aware of just how incorrect they are. This series is groundbreaking, exhilarating, and beautifully made. Being a fan is truly a lifestyle.