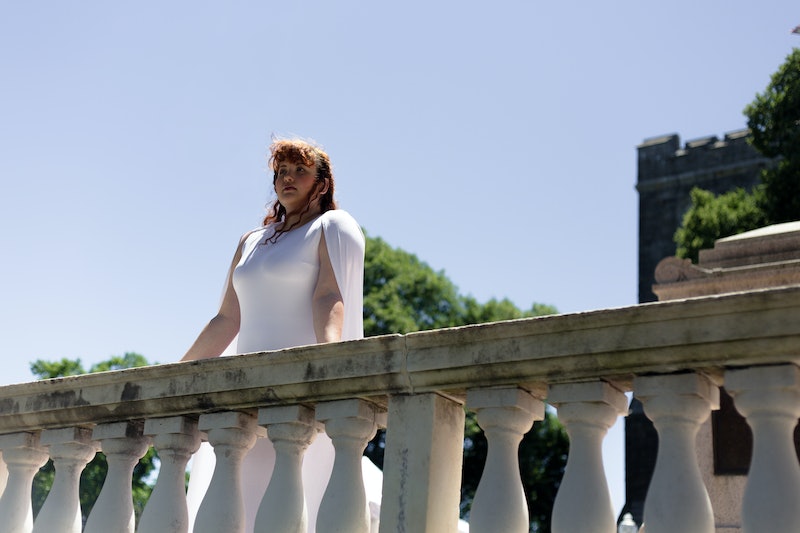 There are few unquestionable truths I live by in this world (what is truth, anyway?), but among them is the simple reality that the characters of Game Of Thrones are amongst the most satisfyingly human, flawed, non compos mentis, and best-dressed on television. Which is precisely why I chose to don outfits inspired by them for seven days.

Like so many feminine-clothing-loving-children, I used to dream of living in a place and at a time in which dressing up was the status quo. Repelled by low-rise jeans and skater sneaks, I longed for Victorian gowns and fine millinery; for princess-like silhouettes and dreamy embroidery. Watching the undeniable genius of GoT's head costume designer Michele Clapton on screen is one of the infinite reasons I tune into HBO every Sunday night for 10 weeks of the year. I might not be able to dress up every day IRL, but I can at least watch people who can.

Recently, however, I began wondering why it is that I "can't" dress up every day. Sure, rules of practicality dictate that wearing a floor-length ball gown on New Jersey Transit might not be the wisest course of action. Corsetry doesn't particularly speak to my faja -eschewing soul, either. But what would actually happen if I channeled the women of Game Of Thrones who so inspire me, in an ever-so-slightly more low-key aesthetic and minus some wigs?

Besides my adoration of all things sartorial on GoT, the female characters themselves have really blown me away as of late. From Sansa to Daenerys, Yara Greyjoy to Brienne Of Tarth, Season 6 has undoubtedly been one drenched in women's empowerment. We've seen ladies standing up for themselves in the face of ruthless and violent misogyny. We've seen them in unapologetic demonstrations of queerness. We've seen them cultivate physical and mental strength in equal measure. By wearing ensembles inspired by Game Of Thrones characters, I hoped to imbue just a little bit of that spirit into my own life. Here's how that played out.

Day 1: Watcher On The Wall

For Day 1, I tried to envision what a Melisandre-meets-Jon-Snow-at-The-Wall outfit would look like. It had to be black, obviously, and feature some kind of vampy Red Woman-esque detail. This trumpet dress with bell sleeves and a lace-up front seemed like a pretty safe bet. I kept my makeup and hairstyling minimal. Members of the Night's Watch have no time for such frivolities, after all.

Throughout the day, I received many compliments on how "witchy" I looked — appropriate given I was trying to stick some Melisandre into my look. And I must admit that I felt great.

Some of my coworkers and I were off-site for most of the day on a video shoot, and despite how many stunning and inspirational women I was around, I didn't feel that out-of-place. Anxiety and paranoia have had me down on and off as of late, and that's manifested in a lot of T-shirt wearing and internal self-deprecation. But dressing up as a would-be badass of The Wall took me out of the head-space more than a little bit.

I loved that the dress was simultaneously easy (no zipping was necessary) but also clearly a stand-out piece. Melisandre, although quite glorious to look at, doesn't seem to put a whole lot of effort into her look. I was beginning to question whether striking that balance between comfort and glamour was something worth pursuing more often.

The Red Woman is often in, well, red. Unlike many of the ladies in King's Landing, her dresses are typically a little lower cut; her magical necklace rarely ever out of sight. We know that Melisandre (regardless of how old she actually is) utilizes her sex appeal frequently and strategically, so I kind of wanted to don something a little slinky and bold to capture a dollop of that femme fatale aura.

It blows my mind how easily an outfit can alter your mood, but this one certainly did. I started this experiment only a few days after recovering from being sick, and I'd still been feeling mentally and physically drained. I hadn't made much time for intimacy with my partner, opting to crash shortly after arriving home from work instead.

But something about keeping Melisandre's admittedly corrupt fierceness in mind helped me drift away from that. The biggest takeaway here was that sometimes feeling like a badass, sex positive babe who's about to charm you with her fire powers is down to telling yourself you are one. I spent a pretty glorious night with my partner this time around, and my mood was tangibly elevated the whole rest of the day, too.

Before Margaery Tyrell was all about piousness and modesty (not that she really is, guys. It's all a trick), our queen favored jacquard gowns with exquisite detailing on the necklines and chest. Never quite as covered-up as some of her elders in King's Landing, Margaery has proven to be empowered in more connotations than one, from the intellectual to the scheming to the sexual. I wanted to channel her love for detail while wearing something slinky enough that still read as "feelin' myself" — some gold jewelry included, of course.

Working in New York and spending a good amount of my time in the city means I'm no stranger to catcalling and sexual harassment — much like every other person-with-boobs in Manhattan, I'm sure. But dressing like Margaery Tyrell sure did bring them out of the woodwork. That isn't to say that what a woman is wearing is ever responsible for the way those around her (very often men) decide that she deserves to be treated, of course. But from the dude at the bagel shop who kept touching my shoulders and the small of my back while asking me to dance and leave my partner, to the one on the street who told me my c*nt probably tasted of the forest, something about this day really had folks feeling free to express their grossest thoughts and desires in my vicinity.

I spent most of the day at work, where many of the kind people I was around told me how "elegant" and "lovely" I looked. But the greatest thing by far was how productive I felt. I met my deadlines at work, and even managed to answer some emails from my long-neglected personal inbox. (OK, only three emails. But that's a much better figure than that of the last several months.)

So, the next look is a little out-of-the-box. I wanted to channel the general vibes of Meereen and several of the Eastern cities Daenerys has come across on her conquering travels. I also wanted to channel a little bit of Missandei, because she's highly underrated and wonderful. The result was something a little more fit for a gladiator, chain belt included, but I can still picture a derivative of this ensemble working out in one of the foreign cities.