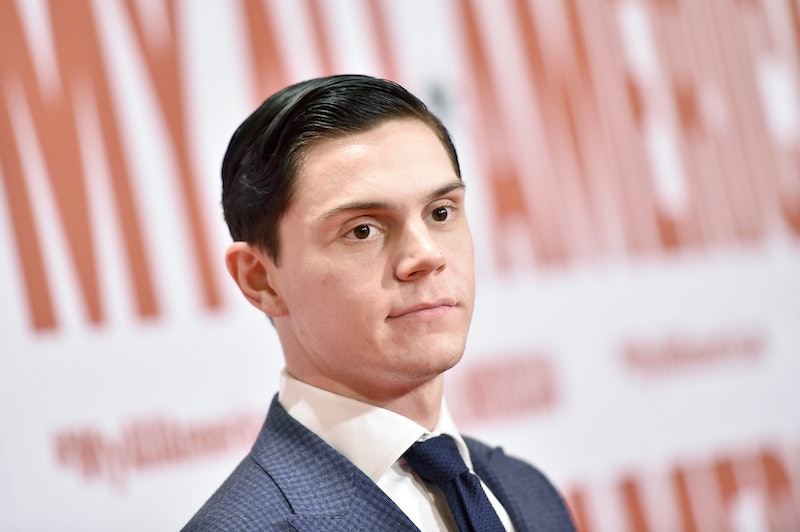 It's been one heck of a ride on Season 6 of American Horror Story . Though the season was originally cloaked in mystery (it wasn't until the premiere that we learned the show was subtitled American Horror Story: Roanoke) its secrets are slowly unfolding itself to us. The new season, about a couple's haunting in the former Lost Colony of Roanoke, is told through a mock docuseries, but fortunately, it isn't short of scares — or crazy characters. So far, we've been treated to murderous colonialists, killer nurses, and Lady Gaga doing her best evil wood witch impression. While there's no shortage of previous American Horror Story alumni portraying outlandish and/or horrific characters, there is one character that we're still waiting for — and it's making American Horror Story fans more impatient by the day. Where is Evan Peters on American Horror Story: Roanoke ? We still have no idea who Peters will play on AHS Season 6.

Peters is listed in the end credits of American Horror Story: Roanoke, but, so far, we haven't seen him onscreen — a huge disappointment, considering he's one of few actors to make an appearance on every single season of the series so far. Without Peters, American Horror Story feels a tad empty — and knowing that he's scheduled to show up is enough reason to keep watching the new season. (Well, that, and that killer AHS twist creator Ryan Murphy promised in his interview withEntertainment Weekly.) So, we know Peters is in series, who could he play? Here are a few theories...

Dandy Mott, part-time serial killer and full-time rich crybaby, was a major player on American Horror Story: Freak Show. As Murphy teased would happen to Entertainment Weekly earlier in the season, the Mott family was mentioned in the fourth episode of Roanoke, but there's a chance that we may continue to explore just how the Motts connect to the haunting currently happening at Matt and Shelby's new home. Could we get some Mott flashbacks, featuring Peters as one of Dandy's relatives? It's certainly possible.

Some fans speculated that Peters is the person wearing the pig mask during Matt and Shelby's run-in with the ghostly figure. It certainly would make sense: the pig man is featured heavily throughout the season, but we still haven't seen a face underneath. If Peters is really the man in the mask, perhaps we'll see a flashback to how he earned his pig head — which will likely be completely horrible.

He's Related To The Wood Witch

Sadie Gennis at TVGuide pointed out that Peters dyed his hair red for his role on this season of American Horror Story, which means that Peters will be rocking the same hair color as Gaga's wood witch. Since the wood witch feeds off of sex, it's possible that she birthed children with unsuspecting men over the years, which could, potentially, have led to Peters' future character. When you combine that with the redheaded feral children Matt and Shelby encountered in the barn, it makes a lot of sense — perhaps Gaga's character is breeding all of the show's redheads.

Peters Will Work For My Roanoke Nightmare

Fans have speculated that Cheyenne Jackson is the voice of the interviewer in the show's fictional docuseries My Roanoke Nightmare, and if that really is the case, it's doubtful that we won't see Jackson as well. With that "big twist" coming up in the season's sixth episode, it's possible that we'll flip the camera around on My Roanoke Nightmare and meet the cast in crew, which could not only include Jackson, but Peters as well.

Whoever Peters ends up playing on the new series almost doesn't matter — seeing Peters on our small screen again is enough to keep us tuned in to AHS all season long.