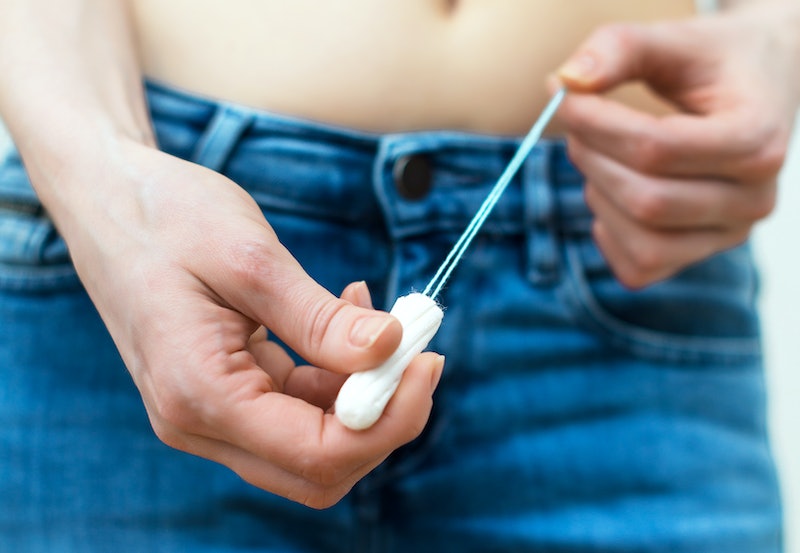 In today's age, during our periods, it's easy for us to slide a tampon into place or stick a pad in our underwear. There are tons of choices on the market, from hypoallergenic pads and tampons to menstrual cups and period underwear. But as the new Elite Daily video "How Women Have Lived With Their Periods Since 1900" explains, menstruating people living in the United States back in the old days couldn't simply "grab and go" when their monthly pool party arrived. And it's not just about the products, either: While the technological aspects of menstrual products have advanced quite a bit over the years, the video shows that today's menstrual taboos — including the idea that periods are unclean and embarrassing — have been around for a while. And, unfortunately, we're still dealing with them today.

The history of menstrual products, it turns out, is a relatively long one. Disposable napkins were first advertised in the media in 1888, according to the video, but because of the stigma surrounding menstruation, the ad wasn't very effective at all and the disposable napkins were then taken off the market. During the roaring '20s, we abandoned linens and instead started using disposable pads held up by a sanitary belt. Kotex, developed by personal health care brand Kimberly Clark, was the first successful disposable napkin inspired by the cellucotton that nurses used to treat wounded soldiers during World War I. Pretty resourceful, eh?

Shortly thereafter, ta-da! Tampons made with a cardboard applicator were introduced. Sadly, though, people had the mistaken notion that tampons could take away women's virginity or arouse them like a sex toy, which kept the stigma against them —and periods — strong. More and more women started using tampons while they worked in factories during World War II, though. Then, During the hippie movement in the 1960s, washable cloth pads became more popular.

Like 50 years earlier, advertising for menstrual products around this time suggested that people who menstruate should only talk about their periods in hushed tones and just "deal with it" instead of complaining and, well, basically pretend it's not there (even though this miracle process allows us to give birth to humans). Then, in the 1970s, right after self-adhesive maxi pads were introduced to the market but before plastic tampons became a thing, the United States finally lifted a ban on television advertisements of menstrual products.

In 1985, the word "period" was used for the first time in a television commercial in 1985. But despite the fact that there were tons of violent movies with blood-spattered scenes, it wasn't until the late 1990s that the first advertisement for menstrual products showed actual blood.

Even now, the widespread idea persists that people who get periods should be ashamed of them. For instance, there are more than 5,000 slang terms for the word "period" according to Newsweek, suggesting that we spend a lot of our time talking around what menstruation actually is. Also, while paid period leave is slowly (very, very slowly) getting introduced, people on their periods still may not feel comfortable asking their bosses whether they can work from home. Economically speaking, an article in NPR notes that there is still a sales tax on menstrual products; known colloquially as the "tampon tax," it classifies products that should be considered essential as "luxury items."

In general, any images or references to periods suddenly make people defensive or uncomfortable. Elite Daily's video points to a study done in 2002, which found that people develop a negative impression of women who drop a tampon rather than, say, a hairpin. This mindset hasn't changed much. Just last year, for example, OUTFRONT Media, the company responsible for managing much of the advertising content seen in the New York City subway system, got a lot of heat for pushing back against proposed subway advertisements for THINX period underwear, even though there was nothing objectionable about the ads in question.

(Said OUTFRONT in a statement to Mic at the time: "OUTFRONT Media makes every effort to assist advertisers in creating campaigns that are both effective and appropriate to the transit environment. ... No copy was ever rejected and the current copy is still in the MTA review process. We suggested changes that we felt were appropriate for the riding public and were hoping to work with the advertiser to refine the copy." The ads were eventually approved.)

Seeing as the average period-having person uses around 17,000 tampons and pads in their lifetime, it's time to dispel that century-old taboo surrounding menstruation. What's the solution, if you ask me? Exposure. Let's talk about periods as much as we talk about sex. Let's not look at men in a weird way when they buy tampons and pads for their partners and daughters. But more than anything, let's celebrate our body's superpowers instead of hiding them.