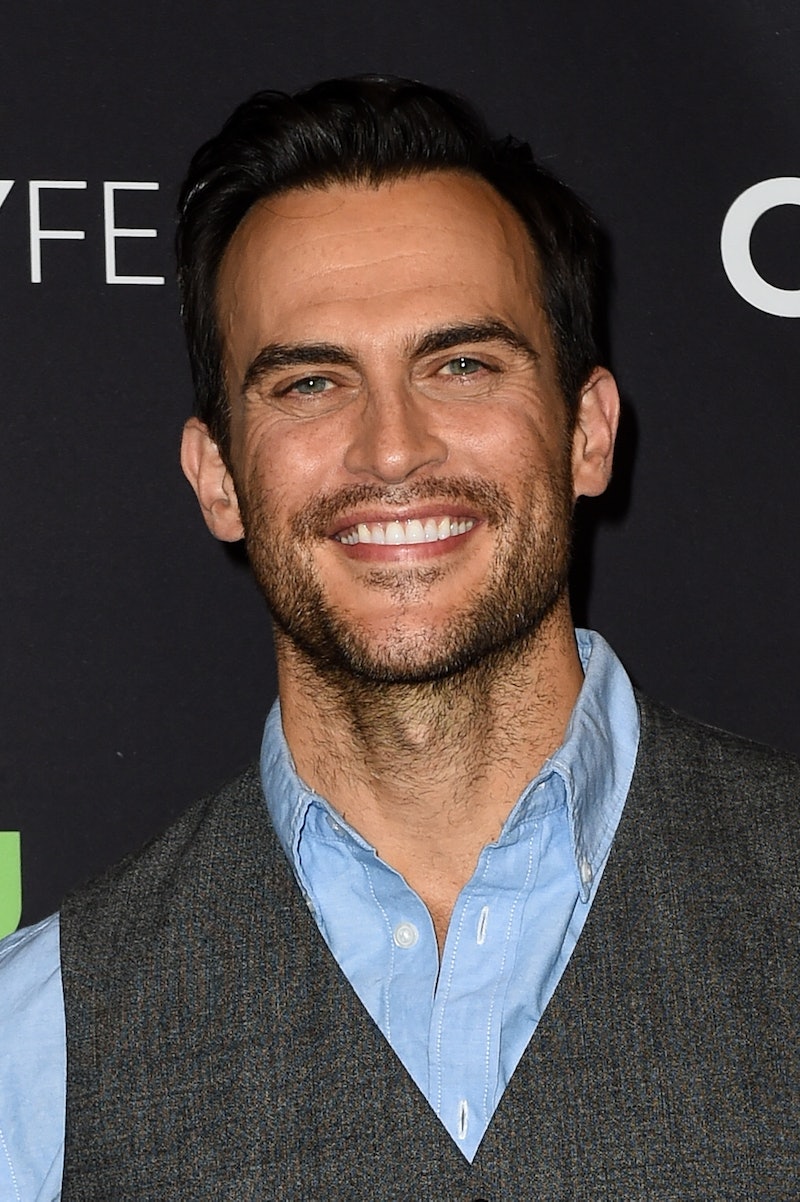 Let's just be real here for a second and discuss how American Horror Story: Roanoke has played with fans' emotions this season. And, Ryan Murphy promised a twist in Episode 6, so things could get even crazier. Especially now that viewers know the interviewer on AHS: Roanoke is actually Cheyenne Jackson.

Much to my dismay, we only got a preview for next week that was approximately 2.3 seconds long, but it was definitely clear that Cheyenne was producing the reality show that we have been watching all along. His character was shown briefly speaking to the camera crew. He was heard saying, "The camera never stops, no matter what anybody says. Even if I tell you to stop, you keep rolling, got it?" It definitely looks like they are in some kind of place of business because they walk towards a lobby where a conference room is clearly off to the side. There are two people that the crew walks towards but they blur the camera lens before you can clearly see them. I slowed it down and I think it could be either the real Shelby and Matt or the actors that are playing them. So, what is he up to? He is obviously anticipating some issues if he gave that warning to keep the cameras rolling. I am thinking that Cheyenne's character might be up to something sinister here.

The clue might be in last week's episode. Shelby made a big point to say that she was just grateful that she would "never have to see that god-awful place again." So, call me crazy, but I am thinking they will be seeing that god-awful place again, much to their chagrin. Perhaps they were led to believe this would only be a documentary about their tale via interviews and reenactments but the real show will involve them being brought back to the actual scene of their "Roanoke Nightmare." Cheyenne might be a bulldog producer who will stop at nothing to gather material for his film. After all, we saw The Butcher (played by the phenomenal Kathy Bates) lit on fire by her own son, but she also ran straight after Lee's car when they fled. She didn't look like she was gone for good. I think we can all learn a lesson from Game of Thrones about assuming characters are dead/gone without actually seeing them die.

They certainly ended the story that they have been telling, so we know that the real stuff is going to be coming our way in Episode 6. After all, Ryan Murphy promised a big twist for this upcoming episode. I feel comfortable trusting him now because he tweeted out that Evan Peters would be making his debut last night and he came through for us in a big way. Finally, we got Evan as Mott descendant (and original builder/owner of the Roanoke home), Edward Felipe Mott. I know that Evan isn't going to only be in one episode and Gaga's character has not been fully fleshed out either. There will be a trip back to the house for sure and I am psyched to see the POV change from dramatic reenactments to the real deal.

More like this
Lady Gaga Delivered A Million-Dollar Performance At A Private Wedding
By Maxine Harrison
What Is Ariana Grande's Net Worth? When It Comes To Money, She Has No “Problem”
By Hugh McIntyre
Jurnee Smollett’s Heart Is Healing
By Rebecca Carroll
Why Sadie Sink Is Hopeful Max Will Return In Stranger Things Season 5
By Brad Witter
Get Even More From Bustle — Sign Up For The Newsletter