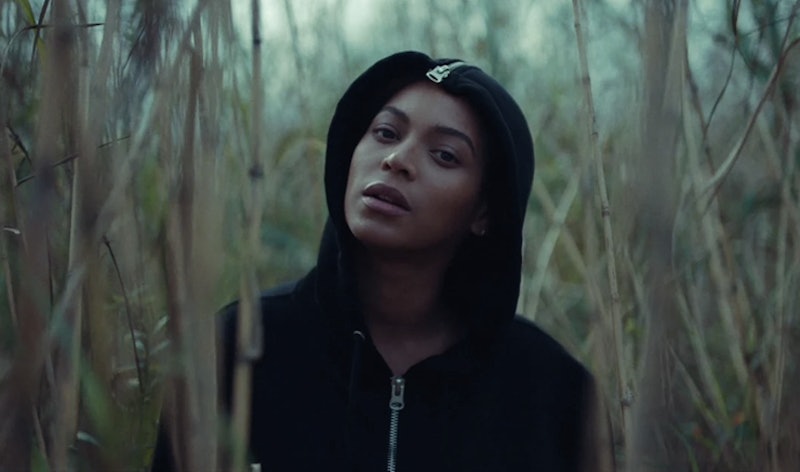 While most fans were processing and absorbing the mysteries, marital implications, and historical depths of Beyonce's HBO Lemonade special this past spring, others were totally focused on the fashions, the importance of the hairstyles, and Queen Bey's unmesswithable personal style. The special was dense with meaning on so many levels. On the fashion front, I personally fixated on Beyonce's zipper hoodie from the Lemonade special, which featured a zipper on the actual hood and which ended at the seam. Yes, I was fascinated by the woman scorned themes and continue to uncover new layers of meaning whenever I listen to the album. However, my fave thing about the special was that hoodie.

I wanted one of my own the second I saw it. For several days, I scoured the web trying to locate it, assuming it would be an Ivy Park offering.

My key words must have been bunk, since my search was futile. Due to the hot weather months, I stopped Googling the hoodie. I largely forgot about it... until I went to see Bey perform last Friday, Oct. 7 at Met Life Stadium in New Jersey.

I told my friend at our pre-show dinner that I hoped Bey would be selling the hoodie as part of her tour merch. Imagine my excitement when I rolled up to the merch kiosks and saw the hoodie.

However, since this was the last date of the tour and a make up show, the hoodie, which was branded with Bey's name and Lemonade, was sold out. Foiled!

While trying to crash out post-show, I did a couple web searches on my iPhone and located the hoodie and its maker. You can buy the Beyonce Lemonade zipper hoodie; there are several versions available, including interchangeable ones. The "Swap Out Hoodie" was created by Chicago designer Jermikko, who designed it so wearers could swap out colors. She was inspired to make these pieces after overhearing a mother tell her son she could not afford to buy him two different colors of the same hoodie, according to The Chicago Tribune. One side of the Jermikko Swap Outs can be switched out, thanks to the zipper. Or you can go with a solid hue. Just peruse the site for all the style options.

Jermikko also stated that like denim and baseball caps, hoodies are timeless. As someone who wears hoodies on a pretty much daily basis during cold months, I cannot disagree.

I am stoked to add a black Jermikko hoodie to my collection.

More like this
Here Are All 703 Outfits Rachel Wore On Friends
By Kat George
The Best Heels For Bunions, According To A Podiatrist
By Margeaux Baulch Klein and Maria Cassano
Cyber Monday 2022 Is Around The Corner. Here Are The Deals To Expect
By Dominique Norman
The Best Black Friday 2022 Fashion Deals To Shop This Year
By Dominique Norman
Get Even More From Bustle — Sign Up For The Newsletter