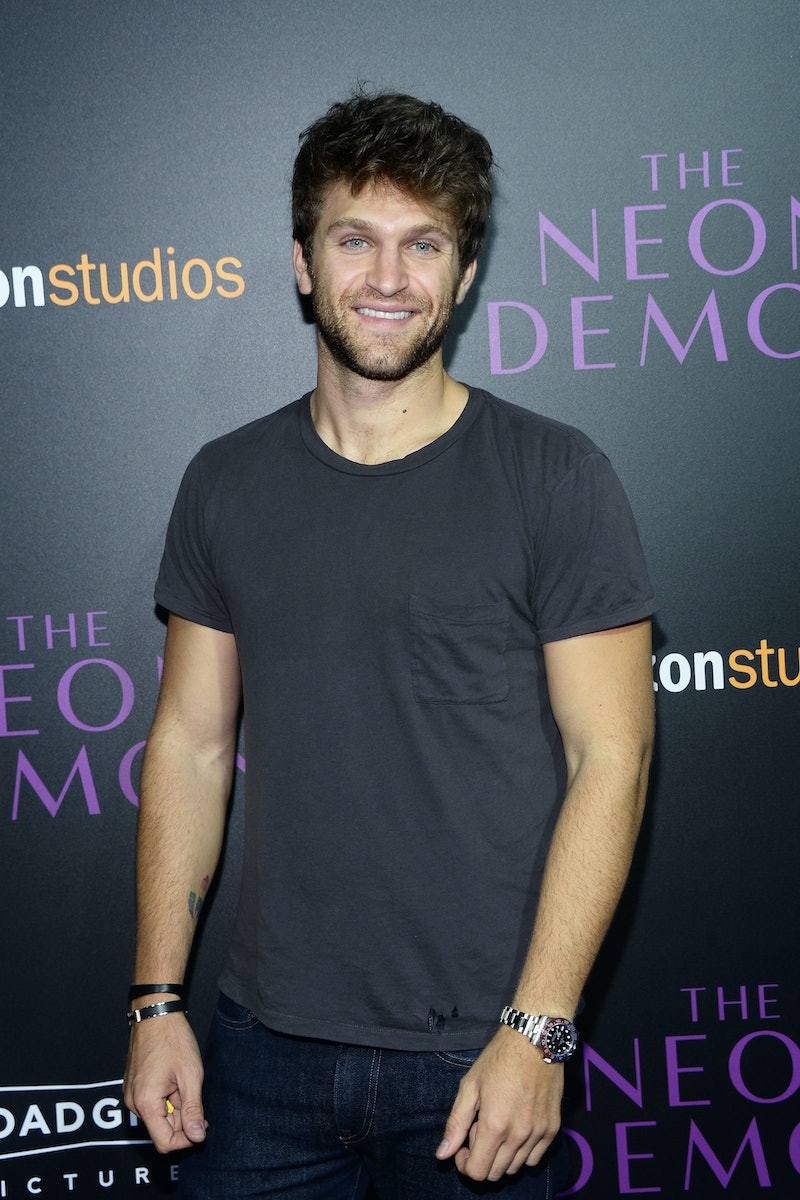 Pretty Little Liars is gearing up for its final stretch, and fans everywhere are already freaking out about the impending series finale. In fact, the only thing keeping many fans going is the knowledge that there are still 10 drama-filled PLL episodes left. But I think I speak for every PLLaholic when I say that those 10 episodes would be pretty sad without Toby Cavanaugh, who ended Season 7A in a bloody car crash. When we last saw Toby, he was clearly injured and unconscious in the driver's seat of his pick-up truck, and his fate did not look good. But photos of Allen on the PLL set gave fans hope that Toby would survive to fight A another day, and according to actor Keegan Allen, there's no doubt that Toby is alive on Pretty Little Liars Season 7.

"People are like, 'Is Toby Dead?' Well, obviously I'm not dead 'cause I'm on set," Allen tells Bustle. For awhile, many fans thought that Toby was the latest PLL casualty, but photos of Allen filming Pretty Little Liars that emerged earlier this year on social media told a different story. In fact, the show hasn't hidden the fact that Allen is very much a presence on set; in late September, Allen acted as Simone Biles' on-set tour guide, and showrunner I. Marlene King has tweeted out upcoming dialogue for Toby, suggesting he is still very much a part of the show. Says Allen about the lack of secracy, "A couple of my co-stars blew that, but who cares. I don't think anyone really believed that I was dead anyways."

As for how exactly Toby Cavanaugh might be making his big return and how his accident might affect the equally injured Spencer (Spoby for life), those details are being kept under wraps. Though he can't reveal any specifics, Allen does promise that the end of Toby's time on the show will be explosive. "It's an amazing storyline," he says of the last 10 episodes. "I think it's a great way to end the series on a note that's.. .pretty intense and will have people talking about it for years and years to come."

Of course, just because Allen says Toby isn't dead doesn't mean the character is necessarily alive in the way fans might want him to be. He could, for example, be in a coma and appear only in flashbacks or dream sequences. (It wouldn't be the first time actors returned to Pretty Little Liars after their characters had died. Jessica, anyone?) Then there's also the fact that Allen himself has been tweeting about Toby's alleged death for months. "RIP TOBIAS. Rest easy, old friend," the actor tweeted after the 7A finale aired in August. Since then, Allen has been steadily tweeting cryptic, if not ridiculous, statements about Toby's supposed death.

Asked to explain his tweets about poor Toby's death, Allen laughs. "I'm a huge Internet troll, like, I will literally say anything I can to get a rise out of people," he says. "I'm a total Internet troll. Most of the things I tweet about is to get a rise out of people." Looks like those "Toby is dead" tweets really were just Allen having some fun on social media. When pressed as to why he enjoys riling up his fans and followers so much, Allen says he wants people to know they shouldn't care that much about how they use sites like Twitter. "I think it's just sort of douchey to take yourself too seriously on social media," he says. "And trolling the Internet is... fun. It's like I say, hashtag Toby's dead."

One thing you won't see Allen tweet about, genuinely or otherwise is the identity of Uber A (aka A.D.). "Oh man, I can't answer those questions," he says when asked about his own Uber A theories. "That's like a death sentence, I'll get like blow-darted from Disney." Yet at the risk of angering the Pretty Little Liars powers that be, Allen did reveal one thing: "Honestly, who it is is outstanding, and it's exactly who I want it to be... It's, like, insanely good."

And, with that, Allen launches a million fan theories. Have fun figuring it out, liars. I'll just be here, obsessively analyzing everything Allen has ever said until PLL 7B premieres in April, 2017.