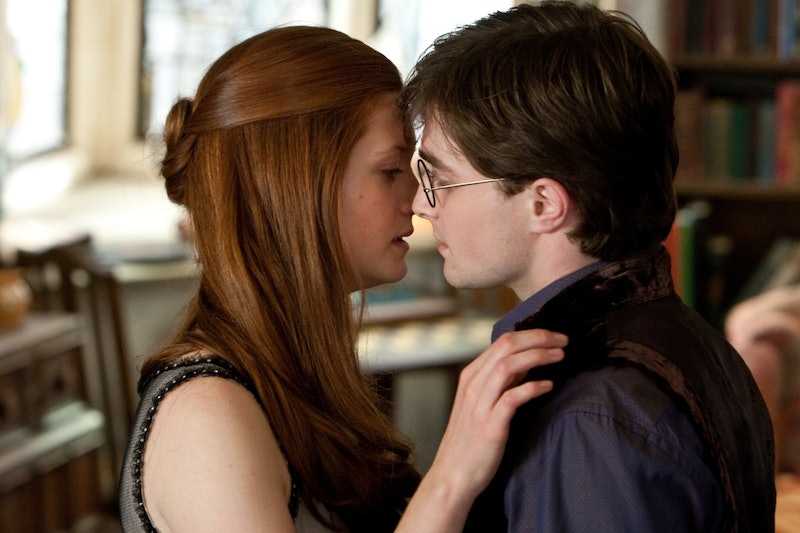 The Harry Potter books were about a bunch of teenage witches and wizards who could fly on invisible horses, blow up annoying aunts, and send messages via owls — but there was still one thing more unrealistic than all that: the love stories. The relationships in Harry Potter gave us seriously unrealistic goals. Like, I've got a better chance of getting my Hogwarts letter than of ending up in a Harry Potter style couple.

In real life, I'll probably never go on a date where legit cherubs hover around and shower us in confetti. We'll never stroll down the snow-covered streets of Hogsmeade, or slip into the Three Broomsticks to share a warming mug of Butterbeer. The romance in Harry Potter takes magical to a whole new level — but the dating scene is nothing like the one us Muggles are familiar with.

That's not to say that love in the wizarding world is perfect. For one thing, all the couples in Harry Potter are straight; if there are any LGBTQ+ couples, they're missing the thriving dating community that they deserve. Also, witches and wizards have a tendency to use love as an excuse for bad behavior (I'm looking at you, Snivellus), which wouldn't fly with my Muggle friends.

But we can't deny, there were moments throughout the series that had us weak at the knees. Don't try to hide it: you've had a dirty Harry Potter dream at some point. And while we're out here navigating the nightmare Non-Maj dating scene, we can't help getting a teensy bit jealous of our Hogwarts pals. (Just think: Ginny Weasley never had to use Tinder, the lucky witch.) Here are the five ways Harry Potter gave us totally unrealistic relationship goals.

1. Everyone Marries Their High School Sweetheart

My high school relationships will always hold a special place in my heart. I learned some valuable lessons, had my fair share of heartbreak, and fell in love in ways that made my teenage head spin. I thought we'd be together forever, like Harry and Ginny, or Ron and Hermione. But while I'll always look back on those relationships with a smile — boy am I glad I didn't marry any of those dudes.

2. First Dates Are Supposed To Be Perfect

OK, so Harry and Cho have a pretty disastrous first date. But his super-strong reaction to it suggests that first dates are supposed to go really well — which is a ton of pressure! You might run out of things to say; you might spill wine on yourself; you might clash teeth when you go to kiss at the end of the date — and you still might live happily ever after.

As a teenager, I studied the pages of Cosmogirl every bit as carefully as my math books — but their cliché advice never got me anywhere. Reading Harry Potter, you'd think it was as foolproof as a magic spell. Hermione making Ron jealous by showing up to the ball with Viktor? That's textbook dating advice. But in real life, it wouldn't have worked out quite so smoothly.

54. Your Crush Will Declare Their Love For You In A Super-Romantic Way

When Ron says Hermione's name instead of Lavender's in his hospital bed, I may have actually gasped out loud. And then remember when Ron declares that they have to help the house elves, and you realise how much he's been listening to Hermione after all? And, er, Ginny's Valentine's poem for Harry was pretty sweet. In real life, those big moments tend to be a bit more underwhelming. "Do you want to grab a drink sometime?" just doesn't have the same ring to it.

5. Love Is A Magical Force That Can Do ANYTHING

In Harry Potter, true love is the most powerful force in the universe; it can win wars, and even triumph over death. In our world, love doesn't have quite the same magical power; at least, I don't think it can protect us from wand-wielding bad guys with no noses. But you know what? It might be the closest thing to magic we've got — and that's pretty damn incredible.