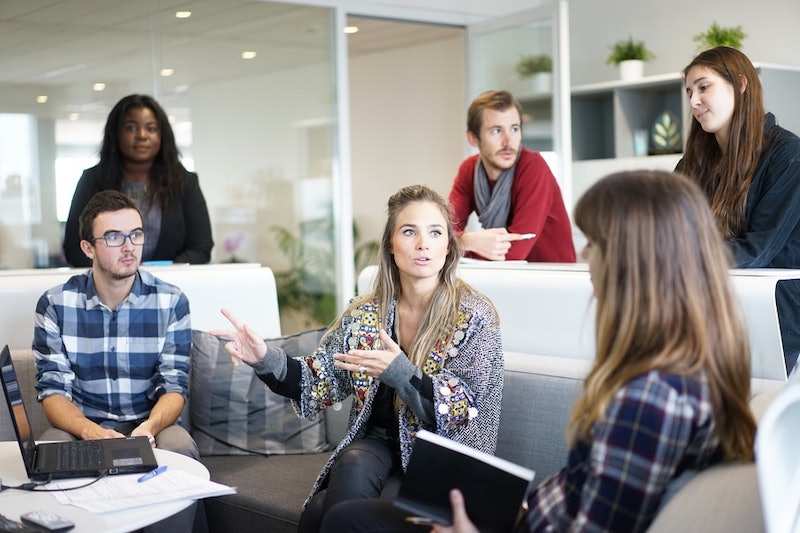 Some people think expressing their personality means saying or doing whatever they want, whenever they want. And while this can be an admirable trait, there are ways to show off your personalty — and be your truest self — while still being as likable as possible.

This means letting all your awesome qualities shine through, while still taking care to not rub people the wrong way. If you don't bother with this consideration, it can lead to all sorts of problems. "[Those who don't] may have fewer friends or any friends. They may not be liked at work," says sociologist and author Dr. Jan Yager, in an email to Bustle. Basically, it's just not worth it.

Same goes for negative attention, which you might subconsciously be seeking by not "caring" what others think. "In psychology, we say that negative attention is better than no attention," says Dr. Nancy Irwin, Psy.D., C.Ht., via email. "Some people would rather stand out even though they are offending others than be lost in anonymity or less visibility."

Whatever the case may be, my point is this: your personality is great and deserves to shine, just not at the expense of other people's hurt feelings. Make sense? Then read on for some ways to really take others into consideration, and be as likable as ever, while still being yourself.

1. Ask Other People About Their Passions

Go ahead and tell people all about your latest projects and hobbies. Enthusiasm is incredibly likable, after all. But do remember to pause and ask others what they like, too. "Everyone loves talking about their passions, so give them a chance to get enthusiastic with you," said lifestyle writer Aja Frost on TheMuse.com. "It’s really flattering when someone cares enough about you to a) notice what you like and b) bring it up."

2. Make Sure Everyone Is Included

Let's say you're presenting a project at work, or telling a story in a bar. It doesn't matter where you are, but you have that spotlight. One of the most likable things you can do is notice the people who aren't involved, and invite them over to join. "Likable people look who’s at the fringes and pulls them in — to the game, to the outing, to the decision making," says certified life coach Elisabeth Stitt, in an email to Bustle. This will essentially win you the "World's Coolest Person Award," and it won't be quickly forgotten.

3. Know How To Respectfully Disagree

Things can get pretty heated when discussing politics, movies, or which shop makes the best tacos. (You know, the important things in life.) But there's a more likable way to express yourself than by angrily arguing, and that's by respectfully disagreeing. Try using "prefaces such as, 'I respectfully disagree with your viewpoint, and here's mine,' or 'You may disagree with me, yet here is my feeling on the subject,'" says Irwin It'll smooth these types of convos over, while making also making you hella likable.

4. Be As Genuine As Possible

Sometimes you gotta fake it a bit, such as telling a coworker you're "fine" when you actually aren't. But in most other interactions, people will really appreciate it if you tell it like it is. "Being genuine and honest is essential to being likable," said Travis Bradberry on Forbes. "It is difficult to like someone when you don’t know who they really are and how they really feel." So go ahead and have some honest convos — even if it means admitting you don't feel great.

5. Be OK With Not Knowing Things

You're the most well read person on the planet, but get thrown into a conversation about interplanetary travel and you're left with nothing to add but a blank stare. It can be a jarring moment, and one where you might feel the need to say something, anything, so as not to appear "dumb." And yet, this isn't a very likable reaction. It's much better to show a little curiosity, according to lifestyle writer Patrick Allan on Lifehacker.com. This gets you out of defensive mode, and into one that's more confident — and likable.

6. Do Nice Things For Others

Did you make amazing vegan cupcakes? Bring some into work. Or maybe you heard your roommate complaining about dry skin? Buy her your favorite lotion. "Do nice things for others not to get ahead or rewarded but because it feels good to think about others," suggests Yager. People will love you for being nice, and for getting to see a little glimpse of your personality.

It's OK to get mad, or to feel cranky. No big deal. Go ahead and feel however you like and let people know. But whatever you do, don't let your mood affect how you treat others. "When people approach you, they like to know whom they’re dealing with and what sort of response they can expect," Bradberry said. "To be consistent you must be reliable, and you must ensure that even when your mood goes up and down it doesn’t affect how you treat other people."

8. Have A Touch Of Optimism

In order to be optimistic, you don't have to be all sunshine-y and sweet — especially if that doesn't match with your personality. But trust me when I say a little positivity is always appreciated. "Even pessimists ... actually find it easier to get along with someone who is willing to see the best in them and in situations," Stitt says. So go ahead and give a little optimism a try.

Like I said above, your personality is great on it's own. So no need to go off trying to get noticed. "Simply being friendly and considerate is all you need to win people over," Bradberry said. "People catch on to your attitude quickly and are more attracted to the right attitude than what — or how many people — you know."

"Often times we like people because they listen and don’t make things all about themselves," Stitt says. So if you have a habit of half-listening (or not really listening at all), try switching things up and truly hearing other people. Your friends, partner, and coworkers will all notice, and their opinions of you will be raised that much higher.

11. Don't Try To Please Everyone

When it comes to being likable, sometimes you just gotta accept that you can't win 'em all. And if you're honest with yourself, why would you even want to? "Being overly 'P.C.' or allowing others to tell you how you should think/feel/believe costs your soul a great deal in the long run," Irwin says. So go ahead and accept that fact that not everyone will like you. "A healthier goal is to be fully self-expressed with respect for all," she adds.

If you can do this, you'll be likable in the eyes of those who are worth your time. And that's really all that matters.