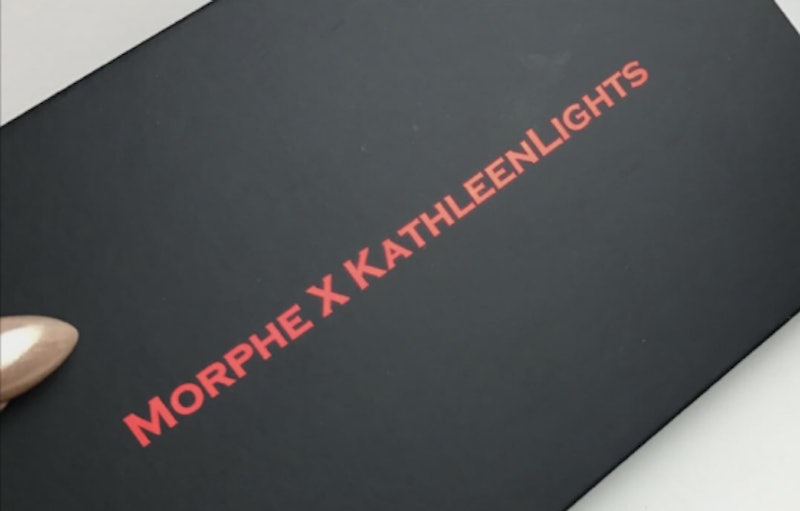 Stop what you're doing because huge makeup news is here. After teasing a secret collab for months now, Kathleen Fuentes, AKA KathleenLights, is finally sharing the details with her fans. According to her social media, Fuentes created an eye palette with MorpheBrushes, and it's every bit as gorgeous as you'd imagine. When can you buy the buy the KathleenLights x Morphe Eyeshadow Palette? Get those wallets ready, because the big day is almost here.

Fuentes has been on a roll with her collabs lately. First there was her second collection with Colourpop, which was filled with gorgeous lippies and liners. Then came her own Makeup Geek Highlighting palette, and now she's got a shadow palette coming out. Basically, she's had a pretty great year, and her latest might just be the most exciting yet.

Fuentes and Morphe have teamed up to create a 15-shade eyeshadow palette that will blow you away. According to her Snapchats, it will be available on Oct. 25 on the Morphe website. The exact price of the palette has yet to be announced. Considering the brand is super affordable, there's no doubt in my mind that this creation will be the same. The only downside is that it's limited edition, so you'll want to act fast.

How pretty is that packaging! Fuentes said that the box is a bit different than other Morphe palettes. Instead of plastic that snaps shut, it's got magnetic cardboard. But enough about the details, look at these gorgeous colors.

Does it get any better than this? I think not. The 15 shadows are a combination of Fuentes favorite Morphe shades as well as some that she created as well. It's got everything from shimmery pops of color to warm and cool toned hues. Honestly, it has it all.

Mark those calendars, people! Fuentes has over 2.5 million subscribers, so you already know that this is going to sell out fast. There's no telling when or if they will be restocked either. Better safe than sorry!