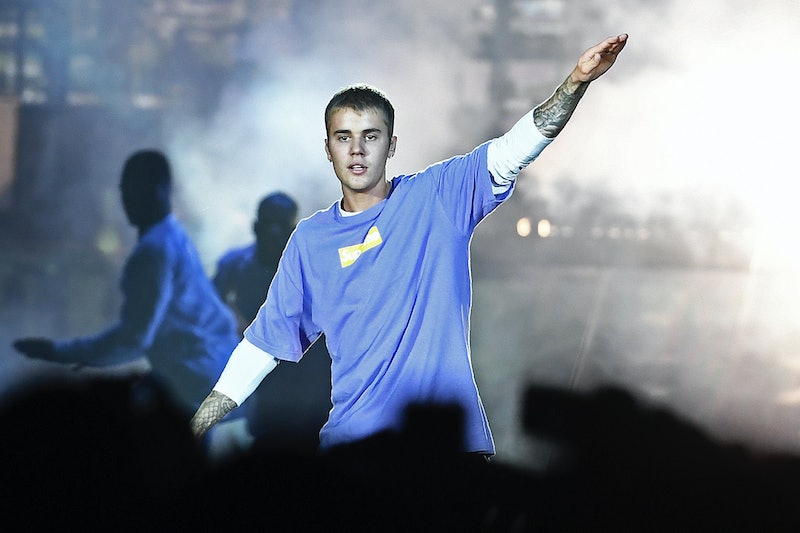 Fans attending Justin Bieber's Birmingham, England Purpose tour stop on Tuesday received a bit of a "talking to" from the Biebs himself. While the "Let Me Love You" singer has a bit of a conflicting relationship with his supporters — he can simultaneously go above and beyond for his fans but can also be rude AF (see: that time he decided he would no longer be taking photos with Beliebers) — he actually made a valid point when Bieber asked fans not to scream during his in-show speeches and between-song banter.

"Can you guys do me a favor? Can you guys just relax for about two seconds? I get it, I get it, but I'm like two feet away from you. And I can hear you," the singer told the crowd. "I appreciate all the love, it's amazing. But can you show it in a different way? Screaming is just so obnoxious."

"I get it, it’s been in our blood and it’s ingrained — you go to a concert and you scream and stuff," he admitted. "But if you could scream after the song. Enjoy the song, scream after, 'it was awesome, it was fun,' and then just take a chill pill for a second and listen to me speak. I don't feel like I'm being heard sometimes. And it gets a little frustrating."

"So, when I'm speaking, if you guys could not scream at the top of your lungs... is that cool with you guys?" he asked, to cheers — and definitely some boos.

And TBH, I get both sides of it. I understand why fans would be upset — using the word "obnoxious" to describe your fans, the people who support you and pay top dollar for those front row seats, is pretty hurtful and unappreciative — but I also see Bieber's point of view.

For all the things the guy has done to "scold" fans (like that time he got annoyed because people were clapping off-beat, and that other time he left during the middle of the show because fans were grabbing a towel) this one wasn't petty — it was actually legitimate. He voiced his concerns in a relatively calm, understanding manner, and I get his frustration. It must feel defeating to have this enormous platform on which to speak but not ever actually being sure if anyone is listening to what you have to say. And even just from a concertgoer perspective, it is rude as hell, disrespectful, and super annoying when fans are screaming when the artist is trying to speak.

For Bieber, this moment was also a chance for him to be emotionally vulnerable with his audience. Sure, some people may not see it that way, but he was being pretty honest with everyone — "I don't feel like I'm being heard sometimes" carries with it a pretty heavy weight. It's real, it's upsetting, and he's trying to level with his audience so everyone gets what they want.

So while some may write off his speech as the latest entry in the "Bieber yelling at fans" handbook, I definitely think this one is different. Listen to what he's saying — and how's he's saying it — before you write it off as just another rude outburst from the Biebs. It deserves more examination than that.