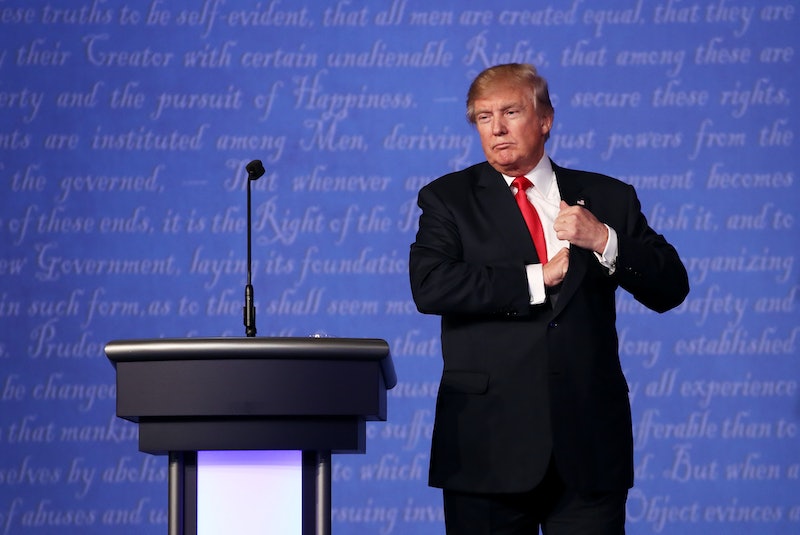 Like every debate this election season, Wednesday night's face-off between candidates had its shock-inducing moments. There was that time Donald Trump referred to illegal immigrants as "bad hombres," and that time he called Hillary Clinton a "nasty woman," but nothing was scarier to me than Trump's comments about abortion rights. Because if Donald Trump had been in charge when I had my abortion, I would have likely been punished, or worse — dead.

Through the campaign, the Republican presidential nominee has made dangerous statements about his anti-abortion position, including plans to ban abortion on a federal level, plans to punish women who get abortions and the doctors who perform them, and plans to leave it up to states to decide whether or not abortion is legal for its residents. But during Wednesday night's debate, Trump's rhetoric got even more terrifying for women's rights.

During the first segment of the debate, Fox News anchor and debate moderator Chris Wallace asked the candidates pointed questions about what they would do with the potential three Supreme Court appointments the next President could be responsible for making. While Clinton talked at length about choosing justices who would fight for the rights of women and families, Trump's response focused on his pro-life position.

"I feel that the justices that I am going to appoint — and I’ve named 20 of them — the justices that I’m going to appoint will be pro-life. They will have a conservative bent. They will be protecting the Second Amendment. They are great scholars in all cases, and they’re people of tremendous respect. They will interpret the Constitution the way the founders wanted it interpreted. And I believe that’s very, very important.

When Wallace pressed further, asking Trump if he was in favor of overturning Roe v. Wade, the Republican presidential nominee responded by saying, "That'll happen automatically, in my opinion, because I am putting pro-life justices on the court. I will say this: It will go back to the states, and the states will then make a determination."

While pro-lifers and serious conservatives all over the country chimed in about Donald Trump's answer on whether or not he supports overturning Roe vs. Wade, I was sitting cross-legged on my couch clutching my chest and wondering, is this really happening? Because for someone like me, someone who has gotten an abortion before, nothing sounds scarier — or deadlier — than the idea of taking the decision out of my hands and giving it back to the government.

I was 23 when I found out I was pregnant. I had been out of college for just over a year, and just getting started on my career. I was struggling to survive under a pile of outrageous student loan debt and oppressive New York City living expenses. From the moment I suspected I could be pregnant, my mind was made up: I was going to get an abortion. It wasn't a simple decision, but as soon as I made it, I knew it was the right one. I've never regretted my choice. I've never wondered "what if," never imagined what could have been. I was lucky enough to be able to make that decision for myself, and carry it out in a way that was safe and healthy. After confirming my pregnancy, I went to a local hospital to have the procedure done by a doctor and team of nurses who were kind, supportive, nonjudgmental, and most of all, safe. It was over in a matter of a few hours on a Tuesday morning, and I've never looked back.

Trump's agenda threatens to rip the rights of women out of our hands, leaving us not just unheard and without power, but without safety and security. His agenda could, in all seriousness, kill us.

That is, until now. Now, with Trump's words still ringing in my ears, I can't help but wonder, what would my life be like if I hadn't had Roe v. Wade to protect me? It doesn't take much to imagine, because we already know the dangers in restricting abortion rights. Many women have even lived it.

Before Roe v. Wade, more than 5,000 women died annually because of unsafe abortion procedures. Restricting abortion doesn't stop it from happening, but rather forces it to happen in dangerous and deadly ways. It doesn't just take away women's rights, it takes away women's lives in the most literal sense. Yet, in 2016, more than 40 years after Roe v. Wade was decided, our nation, namely our women, are once again under threat of returning to unsafe, dangerous practices.

During the final debate, Trump tried to paint a nasty (not to mention inaccurate) picture of abortion as an act of "rip[ping] the baby out of the womb," but his pro-life rhetoric and threats against abortion rights paint an even nastier one. Trump's agenda threatens to rip the rights of women out of our hands, leaving us not just unheard and without power, but without safety and security. His agenda could, in all seriousness, kill us.

Abortions are already hard enough for women. We can't afford to make them any harder.