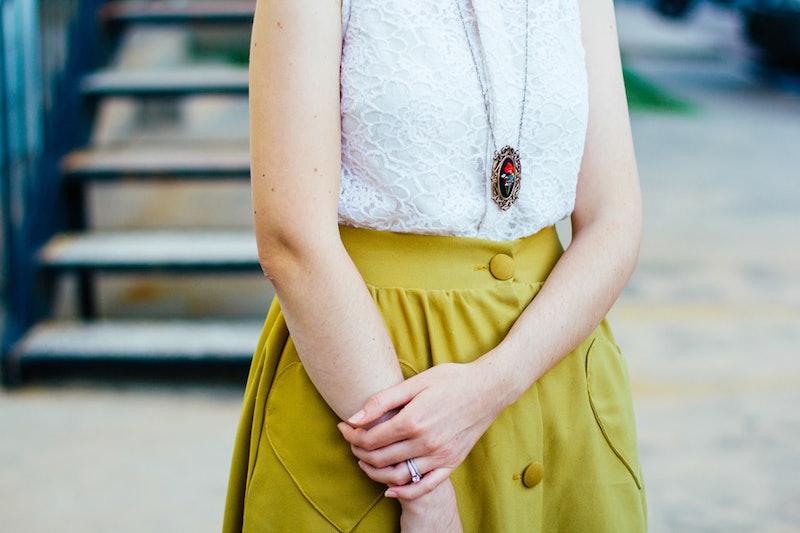 There exist some people who are endlessly approachable. It doesn't matter if they are out at the bar, milling about at a networking event, or simply walking down the street — everyone flocks to their charismatic vibes like moths to a flame. But then there are the rest of us. You know, the ones who accidentally come off as unapproachable, and then sit around wondering what's up with the world.

If this describes you, it could be that you have some rather off-putting habits that turn people away. Do you stare at your phone 24/7? Do you give off pessimistic vibes? Do you spend a lot of time gazing down at the sidewalk? If so, it could explain why you never snag a date, or score a job, or make any new friends. And it could definitely explain why you constantly feel like people are ignoring you.

And can you really blame them? As Nicole Martinez, Psy.D., LCPC, says in an email to Bustle, "Since up to 97 percent of communication is non-verbal, we have to be mindful of the signals we are sending off." When you cross your arms, or turn away from someone, you're giving off the message that you don't want to be approached, she tells me. If that sounds familiar, then read on for other ways you might be coming off as unapproachable, without even realizing it.

1. You Have Closed Off Body Language

If you constantly stand with your arms crossed — for whatever reason — it could be what's turning people away. That's because we humans read into body language, and crossed arms send the message that you want to be left alone, Martinez tells me. If this is your MO, think about being a bit more open. "When standing, keep your arms by your side, never wrapped around your mid-section," said career expert Meghan Casserly on Forbes. It can also help to angle your body towards people (instead of leaning away).

Avoiding eye contact is pretty much a guaranteed way to be unapproachable. And I mean, think about it. "What's harder than approaching a stranger? Approaching a stranger who hasn't acknowledged your existence with even a brief look," said lifestyle writer Diana Vilbert on Marie Claire. To be more open, try your hand at looking around the room and catching someone's eye. Even though it may feel awkward, it'll show that you're down to chat. Simple as that.

3. You Never Look Up From Your Phone

Closed off body language screams "go away." As does a lack of eye contact. But nothing's worse than burying your face in your phone. This not only makes you appear disinterested in human contact, but it also makes you appear too busy to talk. What a horrible combo for approachability.

4. Smiling Is Not Your Favorite Thing

There's nothing more annoying than trying to smile when you don't want to. Oh, except for maybe when people tell you to smile. (That's the worst.) So I'm not going to suggest you walk around with a perma-smile if it isn't your thing. But do keep in mind how welcoming a quick flash of the teeth can be — even if it isn't a full-on grin. In fact, an article on PostiveMed.com pointed to a study that showed even mildly positive expressions can be more approachable than neutral ones. See? No cheesing required.

5. You Accidentally Exclude People From The Group

Think back to all the times you found yourself chatting in a circle of new acquaintances. If you have the habit of excluding people from the convo — maybe by putting your back to someone, or turning away — it could explain why a few of them didn't bother to follow up, Martinez tells me. (Oops.)

6. You Have A Slew Of Nervous Habits

Those approachable charismatic people give off confident vibes, and are therefore super easy to talk to. So it makes sense that the opposite would be true for us nervous types. If you fidget, play with your hair, or tap your foot, it can send the message that you're too nervous to chat. That's why avoiding the habits that go along with the nervous feeling can be helpful in being more approachable, according to mental health expert Arlin Cuncic on VeryWell.com. Easier said than done, of course. But definitely worth a try.

7. You Don't Give AF In The Fashion Department

While you should always wear what makes you feel most comfortable, some occasions call for a bit more polish. Let's say you forgo the rules and show up to a wedding in your yoga pants best. When everyone else is dressed up, your casualness can put people off — whether it feels fair or not. "While it might seem superficial, looks do matter," said relationship expert Natasha Burton on Livestrong.com. "Taking pride in your appearance helps you be more physically and psychologically appealing to others." And, of course, easier to talk to.

On the flip side of the unpolished are those of us who go way overboard with our outfits. To me, this brings to mind the Charlottes of the world (you know, from Sex and the City fame). Her look was always 100 percent on point, which made her unapproachable in a lot of ways. That's because too much put togetherness often comes off as insincere or phony, according to Burton. Take this as your excuse to rock messy hair, or step out with no makeup. It'll make you seem more human, and thus more approachable.

9. You Inadvertently Hide Behind Things

If you're feeling a bit unsure of yourself, it's totally normal to subconsciously feel the need to hide. You may find yourself blocking your body or standing behind things. (Think about hiding behind your drink at a networking event, or holding your purse in front of you when mingling at the bar.) This makes you appear guarded and closed, according to Cuncic, and not very approachable at all.

10. You Give Off Aggressive Vibes

Some people mix up assertiveness and aggressiveness. They think being assertive means being loud, or rude, or pushy. But it actually means the exact opposite. "You can walk the tightrope by increasing your people sensitivity and emotional intelligence," said workplace expert Lynn Taylor on Psychology Today. Consider other people's feelings when being assertive, and you'll be doing it right.

11. You Live For Those Cracks In The Sidewalk

Do you walk into a room with your head held high? Or do you mosey on in whilst staring at your shoes? If you do the latter, it could be why others assume you don't want company. "It is hard for [people] to know to approach you if your head is constantly down; they need to see your face to feel like you want to get to know them," Cuncic said. Makes sense, right?

12. You Constantly Come Off As Negative

I love some well-timed sarcasm, or self-deprecating humor. But being a 24/7 rain cloud can get a bit old. If you're the negative one in the office, for example, you might notice that people start to avoid you. Same goes for giving off negative vibes while on a date, or when networking. If this describes you, switching things up can help. "Be an all around positive person and you will attract people to you," Cuncic said.

13. You Can't Laugh At Yourself

It's human to make mistakes, and it's even more human to laugh at those mistakes. That's why people flock to those who don't take themselves too seriously. "Showing vulnerability and a sense of humor make you more likable and approachable," said author and happiness expert Gretchen Rubin on HuffingtonPost.com. Go ahead and laugh at yourself. People will love you for it.

It really does all come down to those vibes. So look up, smile, and get ready to meet lots of new people.