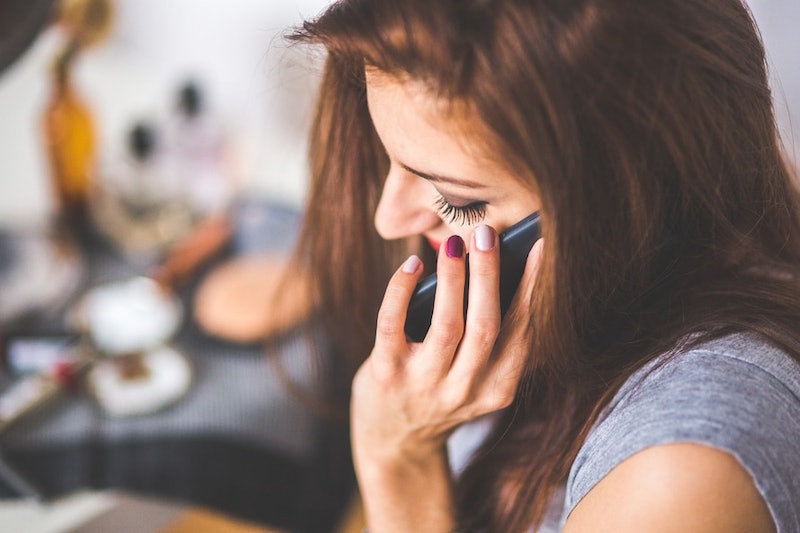 Not many people mean to be rude. In fact, most of us take great pains to be polite and sweet every day— mostly because we weren't raised in a barn (to quote my mom). And yet, it's still possible to be rude without even realizing it.

When I first thought of this, my immediate reaction was, "great, one more thing to add to my ever-growing list of social anxieties." It freaked me out because I take pride in being nice, no matter where I go. I try to smile and acknowledge people I pass on the street. I'd never rudely flag down a waiter, or leave a stingy tip. And I hold open doors for the elderly, or anyone for that matter. Being polite feels like the right thing to do, it makes me all warm and fuzzy, and it leaves someone else feeling better about their day.

It's nice to be that thoughtful, but it isn't a totally sustainable way to be. So don't worry if you can't be super polite on a 24/7 basis. It's not realistic in the slightest. All you can do is try your best, and keep other people's feelings in mind. If you do, you're less likely to be an accidental jerk. With that, here are some surprising ways you're unintentionally being rude, and what you can do about it.

Check Out: Everyday Etiquette: How to Navigate 101 Common and Uncommon Social Situations , $12, Amazon

I knew it, I knew it — ending a text with a period is rude. I always thought so, and it's finally been proven with a scientific study. The research, published in the journal Computers in Human Behavior, showed that ending a text in a period makes it seem less sincere, according to Amy Marturana on Yahoo.com. That's because it's tough to interpret texts without facial expressions or social cues, so we rely on the punctuation, and periods make you appear curt. Save your friends and potential dates the grief, and throw in some emojis, different punctuation, or leave off the period all together.

Not everyone's aware of this, but servers only make a few dollars an hour, and thus count on tips for their livelihood. So don't show up to a restaurant without extra cash, and don't think it's OK to short change them. (No pun intended.) The general rule for waiters is to tip 15 to 20 percent of the pre-tax bill, according to Russ Wiles on USA Today. Get in the habit of giving at least this amount, and tip even higher for great service.

3. Telling People You're "On Your Way"

I'm guilty of this, so let me try to explain the rationale. When I'm running late, I feel really bad about it, and want to assure my friends I'm "five minutes away," even though I'm really twenty minutes away. It feels like shaving off the extra minutes will somehow appease them, but in fact it adds to their stress. If someone is waiting around for you, do them a favor and give them your real ETA. That way they can go grab a coffee, or read a book, instead of waiting around angrily for you.

Toasting is different from country to country, but here in America we sure do value some eye contact. So if you're giving a toast, be sure to look at the person you're toasting, instead of nervously off into the horizon (rude). You should also hold your glass up at shoulder height, gesture towards the honoree and others around you, and say "Cheers! Here's to (insert name)," according to AdvancedEtiquette.com. If you do, it'll be the perfect, and most polite, toast ever.

5. Texting During A Meal

This one only seems acceptable because everyone does it, but in reality texting during a meal is insanely rude. It makes people feel like they aren't worth your time and attention. It also isn't the best way to form bonds, live in the moment, or communicate with your fellow humans. Tuck that phone away, and try to start a no-phone trend among your friends.

6. Thinking About Your Answer While Someone Is Speaking

People can tell when you're only half listening, and it can come off as rude. Plus, it makes communicating more difficult. As Marturana said, "Thinking about what you’re going to say instead of really focusing on the other person’s words stops you from responding accurately to them ... It [also] says what you have to say is way more important." Don't let your mind wander while someone is speaking, and instead focus on them 100 percent, and then figure out what to say when actually it's your turn to talk.

When you're busy at work, and answering hundreds of emails, it can be tough to include little personal touches in every single one. But you should try. As Marturana said, "... leaving out any sort of emotional subtext can make your email seem rude ... Without the face-to-face cues, getting a little wordier can make a world of difference in whether your message comes across as cordial or rude."

8. Interrupting When Someone Is Talking

Everyone interprets from time to time, but there's a big difference between interpreting to talk about yourself, and interrupting to add meaning to the conversation. The former is obviously super rude, while the latter is usually OK. "The key is really to make the interruption serve the conversation and to pay more attention to the times you mindlessly interrupt others," said Melanie Pinola on Lifehacker.com.

Standing with crossed arms can give off some pretty powerful subliminal messages, whether you mean to or not. That's because crossing your arms over your chest signals defensiveness and resistance, according to communications expert Karen Friedman, on Forbes. To appear more approachable, and way less rude, keep your arms comfortably down at your sides.

I know, you're horrible with names, and so no one should expect anything different from you. But when you consider how hurtful it is to have your name forgotten, you might be willing to put in a little more effort. And by that, I just mean repeating the person's name until it sticks. According to a study published in the journal Consciousness and Cognition, researchers found that repetition is the key to making a piece of information stick, according to Kate Bratksier on HuffingtonPost.com. Keep saying the person's name to yourself, and repeat it to someone else, until it's well lodged in your brain.

11. Blocking The Aisle In The Grocery Store

Many incidents of rudeness come about when people lack awareness of their personal surroundings. I could make a list a mile long — walking too slow on the sidewalk, blocking others on the sidewalk, leaving your cart in the middle of the aisle in the grocery store, etc. etc. If you do these things, just try to be more aware of your surroundings, and the other people in it. (End of PSA.)

There comes a time in life when simple hang outs turn into "get togethers," and these events require showing up with some sort of hostess gift. "Arriving without anything for the host makes it seem like the invite was no big deal," said Fabiana Santana on TheDailyMeal.com. But it totally was. Your friend had to clean and make food, so show you're appreciation with a bottle of wine, or bag of chips.

This one kind of ties in with number 11, and being aware of your personal surroundings. When it comes to driving, however, the stakes go up about 100 percent. That's because you're now involving huge pieces of metal, high speeds, and people's safety. So be sure to stay aware of your surroundings when you're driving, and keep up with the speed limit. It's much safer, and you'll be less likely to make your fellow drivers totally insane.

That's really all it takes — just a few little tweaks here and there, and some personal awareness, and you can get rid of all your accidental rudeness. I know that I'm going to be more aware of lateness. What about you?