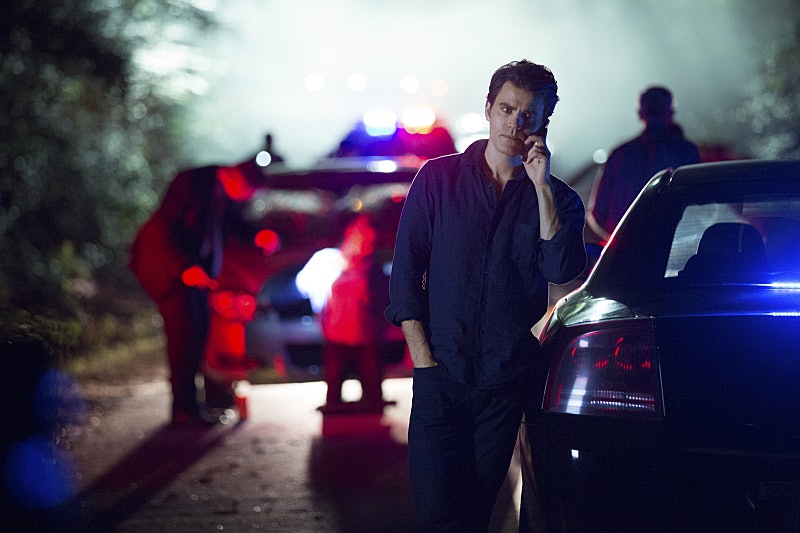 It's been months since Stefan and Bonnie last saw Damon and Enzo on The Vampire Diaries , and in those months the Mystic Falls crew have been busy searching for them. While Alaric continued to explore the secrets of the Armory, Bonnie, Stefan, and Caroline have been trying to track the trail of missing persons Damon and Enzo have been leaving behind. And, in "Hello, Brother," the series' final season premiere, they finally found them. Well, to be more exact, they found a body that led to Damon and Enzo. Stefan and Bonnie found Damon and Enzo on The Vampire Diaries , but it wasn't the sweet reunion we all hoped for.

Damon and Enzo are still under the spell of the great evil darkness, or whatever was locked up in the Armory vault, which makes them hunt and kill. While Damon has decided to turn off his humanity in an effort to guard his mind against this mind-controlling evil, Enzo is still fighting for just a small piece of control. And in "Hello, Brother," he used that control to leave breadcrumbs for Bonnie and Stefan by leaving a dead body for them to find — the first in a string of missing persons.

Enzo leaves clues in and around the body to tell Bonnie and Stefan that he and Damon are near. He leaves a guitar string around her neck — a sign of Enzo — and the odometer on her car says it's been driven exactly three miles, which leads them to the abandoned slaughterhouse where Damon and Enzo are currently being held.

Alas, when Stefan and Bonnie get to the slaughterhouse, they still have no way of saving Damon and Enzo. And Damon, under the evil being's control, threatens to kill Bonnie if they don't leave. As he's kicking them out, he tells Stefan that he still blames him for turning him all those years ago. Stefan is certain that he's lost Damon, but Bonnie isn't so sure. The fact that Enzo left clues for her show her that he wants them to come back for them, to fight for them. They just have to figure out how.