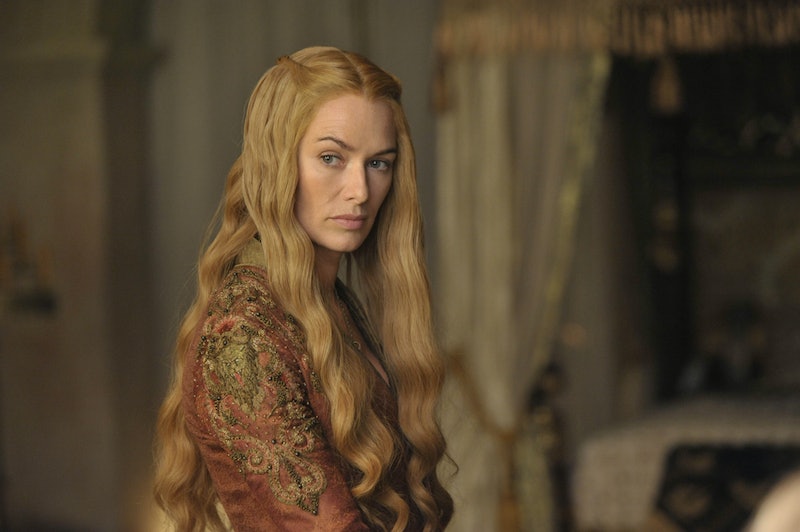 Cersei Lannister is arguably the most terrifying woman to ever be on TV. Literally, ever. But no one can deny she is cutthroat in the most watchable, addicting way possible. Low-key, that crazy bitch is goals. When watching Game of Thrones, and obviously drinking your wine, you find yourself shaking your head with a pitiful look of disgust almost every time Cersei (Lena Headey) not only emerges on screen, but inevitably prevails in the storyline. She is Ursula meets the Sanderson sisters meets Voldemort. Times 100. But no matter how aggressively you hate and fear her, on some level, you know you jump for joy watching Cersei in action, wondering what in the world she'll do/destroy next.

Here's a mini breakdown of what she's capable of: sending her own brother to be hung for a crime he didn't do, having sex with her brother, attempting to kill her son with poison, conspiring to have a young boy killed after caught having sex with her brother, making a church filled with people explode. I may be missing a few notes, but it's because I'm too terrified to continue. Still, regardless of how narcissistic, manipulative, and destructive Cersei is, hating this character is also so much fun, and here's why.

1. Her Ruthlessness Knows No Boundaries

Cersei is an unstoppable force on the show, with everyone around her in the palm of her hand. You may disagree with every single one of her actions, but it's hard to deny that seeing a woman on screen be so relentless about doing things her way to get what she wants is addicting, and in a weird way, empowering. Once she sets out to accomplish something, watching her execution is riveting. I know she'll prevail, but which poor suckers will she destroy in the process? Most of her decisions are horrifying, but why do I still find myself rooting for her while reaching for more popcorn? Am I OK?

2. She Has Great Hair

Every time she starts acting all Cersei cray, I look at that gorgeous, flowy golden hair and wonder: "Can someone with that delicate hair of a princess really be all that bad?" It's all part of the manipulation. Even though her locks were chopped off in season 5, people don't forget.

3. Her Wardrobe Is To Die For

Even if she is constantly scheming, she looks damn fabulous in lavish getups doing so. Personally, I would look haggard always trying to keep up with my own plans of mass destruction, but Cersei's upkeep is pretty on-point, and if I do say, admirable.

4. She's Low-Key About Being Evil

There are no outward "mwuahahaha"s coming from Cersei, which makes her cunningness that much more powerful. Her plots are quiet until the endgame is ultimately revealed. Thus, fans never know what to expect and her ruthlessness (see #1) may take a turn in a way they would've never predicted. She doesn't necessarily boast about what she's capable of or run around threatening others with her plans, even if she could end any character she wanted to with the snap of her fingers. She's one step ahead of everyone, audiences included.

Clearly flawed. And she knows it. Seeing her at her most vulnerable while doing the Walk of Atonement through King's Landing made fans actually feel for her. Watching her crumble and reveal (one of) her sins briefly brought her down from her throne to receive punishment for the unspeakable things she'd done. Although she was weak in that moment, she mostly remains aware of her flaws and doesn't care to change them.

Who knew her and I would have so much in common? When things get tough, the answer is simple: More wine. I hate knowing we'd bond over this, but I love it at the same time.

7. Her Facial Expressions Are Unmatched.

Although Cersei keeps many things up her sleeve, facial expressions are not one of them. Sometimes she wears her emotions on her face and they truly embody so many life moods. I love to watch her usual sly face crack, and give a gift to the internet, such as the GIF above.

Walk of Shame aside, Cersei is not sorry. She does what she has to do to get the job done, end of story. I could sit here all day conspiring on why fans love to hate her and hate to love her and she still wouldn't care, nor feel sorry. Cersei's lack of remorse continuously grinds my gears and makes me curse at the TV, but I also love that she just does not care.