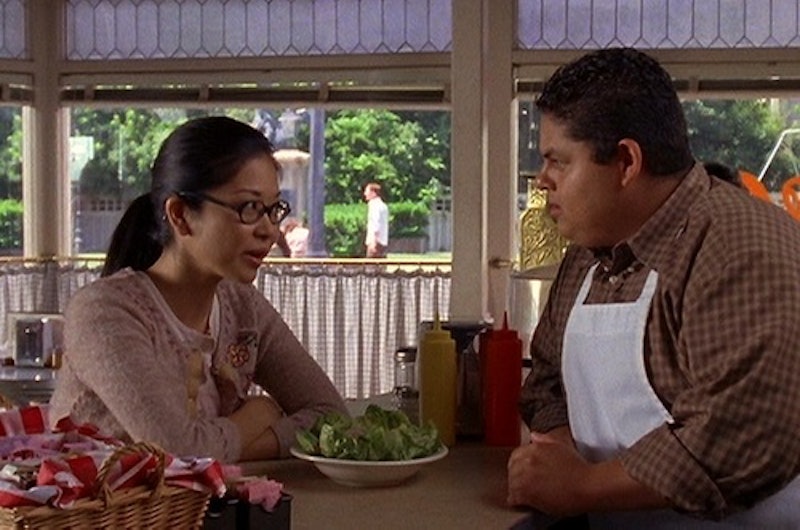 It is safe to say everyone has gone a little bonkers with the Gilmore Girls revival theories, but one fan theory about the original series has just been confirmed. Have you ever heard the fan theory that Rory and Caesar were classmates at Chilton? If you haven't, you're not alone, either (I didn't know it, either), but thanks to a reveal at the Gilmore Girls fan festival over the weekend, it turns out this is one bit of Gilmore Girls lore that is 100 percent accurate. Yes, my mind is just as blown as yours is right now.

So, the story goes that Aris Alvarado, aka Caesar, appeared in the Season 1 episode "Rory's Dance" as an onlooker during Tristan and Dean's confrontation. No one seemed to have noticed the extra was actually Alvarado until intrepid Twitter user Tatiana Cornejo spotted Alvarado in the shot and then asked the actor via Twitter if that was him. Alvarado not only confirmed he was the actor in the scene, but he also revealed the character he was playing was Caesar, who would not have shared classes with Rory because he was a year or two above her in school. Now, this could all be Alvarado's personal head canon, but I will happily accept confirmation of a theory that reveals Caesar and Rory were actually classmates. It's just too cool to be ignored, you guys.

According to HelloGiggles, Alvarado officially confirmed the Caesar news during the cast panel at the Gilmore Girls fan festival in Washington Depot, Connecticut. "Three years later, you see me working at Luke’s, so I’m like 20 years old, 21 at the time," Alvarado told fans. With that in mind, it makes perfect sense Rory and Caesar's paths never crossed until after Caesar graduated. The real question is, did Rory and Caesar ever realize they were both Chilton alums? And did Caesar pull a Lorelai and denounce his upper crust family to live in Stars Hollow and work at Luke's? I have so many new questions.

While Alvarado is back for Gilmore Girls: A Year in the Life , it seems unlikely the revival will feature a scene between Caesar and Rory gabbing about Chilton memories. Just knowing that Caesar and Rory share the same high school gives Gilmore Girls yet another layer of texture, though. Who knows what other secrets Stars Hollow holds after all these years?

Just think, when you tune into the revival you will now know a secret about the mysterious Caesar. It turns out he's not just a fry cook with a wicked sense of humor. He also happens to have attended a prestigious high school alongside Rory Gilmore. Stars Hollow really is the most magical place.