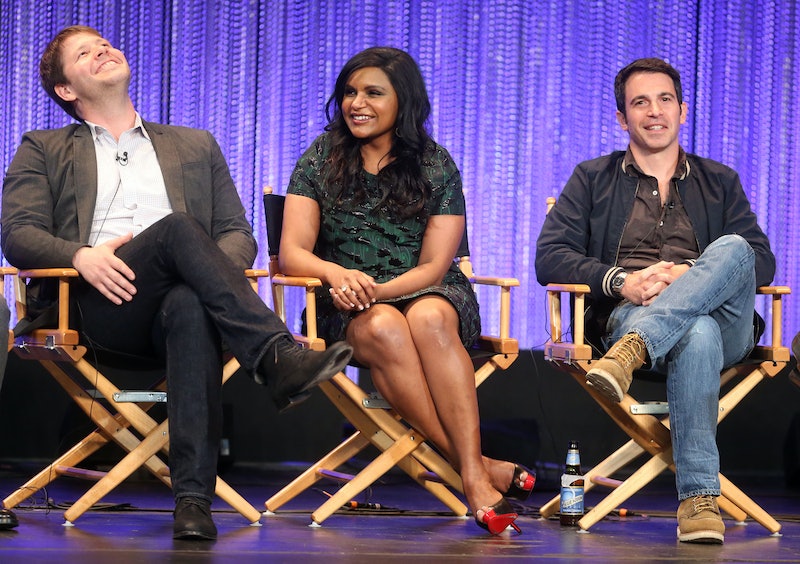 Not that this is a shocking announcement, but: the cast of FOX's The Mindy Project are very, very funny. The recently renewed comedy series has been on the world's longest hiatus (at least that's how it has felt to fans), so we (as well as everyone else at the Dolby Theater) were over the moon to watch one of the 8 all-new episodes coming at us starting April 1st. And not only that, but the cast managed to divulge a veritable smorgasbord of behind-the-scenes information and even a few enticing spoilers about the remainder of the season. We've compiled the best — and most telling — quotes, below.

And lest you were worried, we can confirm: everybody is in love with Chris Messina. And it's clearly (and adorably) awkward for him.

"You guys are too old to be playing games!" — Ike Barinholtz on why Mindy/Danny are different than Jim and Pam from The Office .

On The Other Office Romances:

"We accelerate in a very pleasing way — the relationship between Tamra and Morgan" — Kaling the future of Morgan and Tamra's oddly delightful relationship.

"Tamra is kinda into pale creeps." — Xosha Roquemore on her character's taste in men.

"I think she might want to kill you!" — Barinholtz on what may come from Mindy's romance with Danny... by way of Betsy! (Twist!)

"He's always half inside me" — Ed Weeks on his relationship with Ike.

"It's great for me because I grew up in the south and I'm so repressed," — Beth Grant on her character Beverly's outlandish frankness."Danny Castellano is my favorite character, ever." — Kaling on her the best character she's ever written for.

"He thinks it's like when you get 6 or 7 number on a phone number like that's enough." — Kaling on the what Messina says when he spends 90% of his time in a scene breaking with laughter.

"Oh my god do you have a Rachel?!" — Kaling referencing Jennifer Aniston's Friends hair in relation to Messina's after a fan stated he had his hair done like Danny's.

"I was extremely nervous and extremely mad that I told them." — Messina on THAT DANCE.

"We had a raffle, and [writer Jeremy] Bronson won." — Executive producer Matt Warburton on how they chose who would be on the closed set for Danny's naked photo shoot.

"You know who's good? The Indian girl." — Barinholtz impersonating some of the older, newer male fans he's encountered.

On People's Connection to Mindy:

"No! That means you're fucked up!" — Barinholtz joking about what it means when people relate to Dr. Mindy Lahiri/Mindy Kaling in general.

As for what you should know heading into next week's all-new episode, the cast agreed these last 8 episodes are "like a miniseries," and also/probably/definitely "just like Breaking Bad" (and not just because of guest star Anna Gunn/Skyler White, natch). The episodes collectively tell one story. Which is very exciting, considering there are "bumps in the road" for Mindy and Danny's relationship.

But perhaps the best news of the night was, when asked who should be a guest star on the show, Kaling selected a "close friend" (which: what/of course) of Messina's, Sam Rockwell. JUST IMAGINE THE DANCE-OFF, YOU GUYS. Sam Rockwell is smooth like a slippery noodle, Messina's got the technicalities on lock: I see it in my mind's eye and it is oh so very, very good. Season three: make it happen!